Foxtons is looking decidedly unfoxy at the moment, with its sales taking a big hit from the cooling London property market and George Osborne’s stamp duty hike. Its fourth quarter sales commission dropped 25.7% after the ‘mansion tax by stealth’ kicked in in early December.

Turnover in the quarter to December 31st fell 12.1% year-on-year, although full year sales rose 3.4%. The company said it expected full year EBITDA (earnings before interest, tax, depreciation and amortisaton) to be £46m, compared to £49.6m the year before.

Lettings, on the other hand, did pretty well – up 7.7% compared to the fourth quarter of 2013. But even though renting makes up half of Foxtons’ business that wasn’t enough to make up for the downturn in sales.

Its shares duly dropped 3.5% to 155.5p in early-morning trading, a far cry from the day it IPO-d at the height of London property overexcitement back in September 2013, when they jumped 16% to 267p. But then something strange happened: trading volumes spiked and shares were more than 7% higher at midday at around 173p. What’s going on? 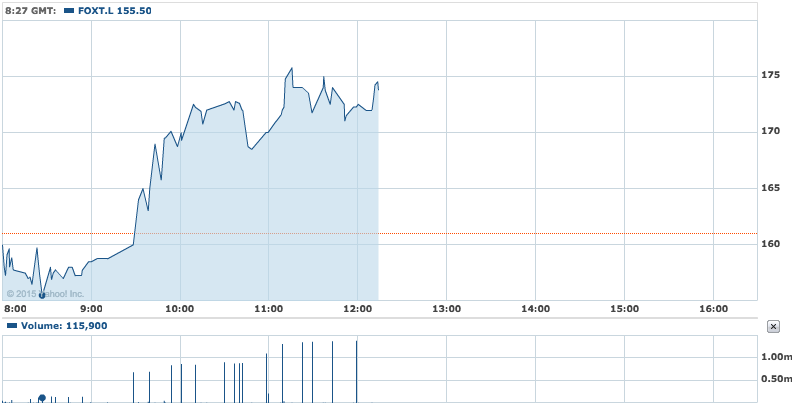 ‘Short positions closing,’ according to Jefferies analyst Anthony Codling. That is, investors who bet on Foxtons’ share price falling are cashing in by buying shares at a pre-agreed low price. Except that’s pushed up the price again. Makes sense.

‘I don’t think people are suddenly having a different view on the London housing market,’ Codling told MT. And official data does indeed show it coming off the boil: annual property price inflation in the capital was an eyewatering 15.3% in the year to November, but has come down from 19.6% back in August.

There is also another sign there’s trouble brewing in ‘Prime Central London’ property (i.e. the bits only foreign investors can afford): an impending glut of new luxury flats.

Some 54,000 homes are being planned, already have planning permission or are under construction in a swathe of the capital extending from Earl’s Court (where the exhibition centre is being turned into flats) to Tower Bridge and Regent’s Park to the South Bank, according to research by property buyer advisers Property Vision. Their developers will be hoping to put most of them on the market for at least £1m. But only 3,900 £1m-plus properties were sold in central London in 2014, according to data from property database Lonres.

What the skyline at Vauxhall and Battersea could soon look like. Source: Property Vision

When there’s an oversupply like that and no extra demand to go with it, prices are only going to go one way. And that’s bad news for Foxtons and its fleet of minis.