The FTSE 100 was down in mid-morning trading after a poll revealed the ‘yes’ campaign is closing in on the ‘no’ camp. 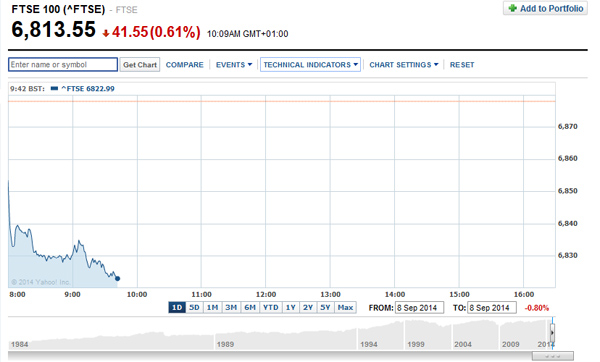 Sterling also dropped to its lowest price against the dollar in nearly 10 months after a shock opinion published by Yougov over the weekend suggested the Yes Scotland campaign for independence had taken a narrow lead.

With just under two weeks to go before the vote on 18 September, the poll put the ‘Yes’ to independence campaign on 51% against the ‘no’ camp’s 49%, overturning a 22-point lead for the Better Together campaign in just a month.

Until a week ago, the chances of Scotland leaving the UK had been thought unlikely by financial markets and businesses.

Of the top ten fallers in the FTSE 100 this morning, half were Scottish companies. Lloyds Banking Group, which owns Bank of Scotland and Scottish Widows, dropped 2.9%, RBS fell 2.8%, and Standard Life was down 2.88%.

The increasing likelihood of a 'yes' vote may now encourage more business leaders to speak up about the impact of Scottish independence. Douglas Flint, the chairman of HSBC, and Andrew Mackenzie, CEO of BHP Billiton, have already given the Better Together Campaign their support.

However, some prominent Scotland-based companies have yet to be drawn in. Martin Gilbert, founder and CEO of Aberdeen Asset Management, told MT earlier this month: 'I am constantly asked about my and our position on Scotland's vote on devolution. We are neutral and are making no contingency plans.'

Chancellor George Osborne said the government will this week outline a process to give new powers to Scotland if a No vote is returned, hoping to win over voters sitting on the fence.

He told the BBC's Andrew Marr show: 'You will see in the next few days a plan of action to give more powers to Scotland. More tax powers, more spending powers, more plans for powers over the welfare state. The timetable for delivering that will be put into effect the moment there is a No vote in the referendum. The clock will be ticking for delivering those powers, and then Scotland will have the best of both worlds.'