The pale, male and stale state of Britain’s top businesses is well known, so it’s good to see the UK’s largest companies bringing more new blood to their boardrooms as the oh-so-slow march towards gender equality continues.

More than half of the 434 non-executive director appointments in the FTSE 350 in 2014 were first-timers, according to headhunter Korn Ferry, a proportion that’s steadily increased in the last few years. 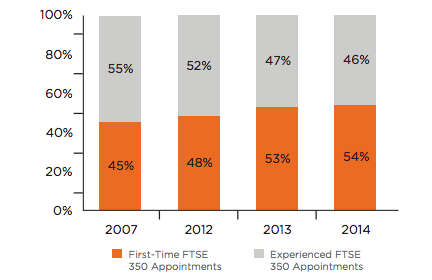 That’s down in part to two things - firstly, the push to increase the proportion of women on boards to a quarter, achieved last month. The percentage of female NED appointments rose to 39% last year from 28% in 2013 (including Rightmove's Rakhi Parekh, pictured above). But that’s still below the 47% achieved in 2012, the year after Lord Davies set the 25%-by-2015 target. Gender parity this is not. 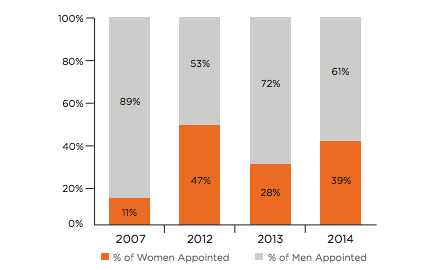 Secondly, an increase in IPOs in the last couple of years has also brought new faces to the top tables. In 2014, 15 FTSE 350 floats lead to 32 virgin NEDs, down from 55 from the same number of listings in 2013. Meanwhile, the proportion of appointees that have been private company executive directors has more than doubled to 27% since 2007.

An increase in newbies on boards is to be welcomed. As long as they’re up to the job, it can only help break down the ‘groupthink’ that bedevils many businesses. But another measure of diversity is going backwards, with non-British appointees falling from 47% in 2007 to 41% last year.

And Korn Ferry’s data doesn’t look at plenty of other important diversity indicators: ethnicity and socioeconomic background, for example, or more ‘hidden’ ones like sexuality and disability. We may be getting more untested talent into Britain’s boardrooms, but they could well be cut from much the same mould as their predecessors