Only a quarter of banks and building societies that signed up to the now-business-only Funding for Lending scheme actually made use of it in the three months to the end of June, according to new figures from the Bank of England.

The scheme, which was launched in 2012 by the Bank of England and the Treasury, allows banks to borrow £5 from the central bank for every £1 of net lending (loans issued minus repayments) to businesses. It was designed to encourage lending to small and medium-sized business in particular, but banks and building societies haven’t made much use of it, despite all the cajoling.

Meanwhile, alternative finance firms think the scheme is stifling small businesses by focusing too much on big banks and not enough on (you guessed it) alternative finance. ‘These latest figures reveal that the banks are still not doing enough to give small companies adequate funding’, said Nicola Horlick, noughties City superwoman-turned-CEO of peer-to-peer business lender Money&Co. ‘Unlike the banks, which seem to be stifling growth, alternative finance has real potential to boost the UK economy.’

Unsurprisingly, given that three-quarters of them didn’t use the scheme, net lending to small firms by eligible providers was negative for the quarter, at £-0.4bn, although the Bank of England did point out that this was ‘less negative’ than it had been before. 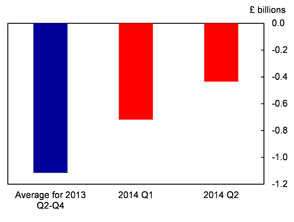 Despite this rather desperate attempt at optimism, MT wouldn't be surprised if the government lets Funding for Lending expire quietly in January 2015, when its current term ends.