For a long time now, we have suspected that there has been more ‘noise’ around gender equality than actual action. Not only is this unhelpful, it may be lulling us into a false sense of security that we are actually doing something, when we are simply masking the problem. So now gender pay gaps (GPG) are public knowledge, we did some research to test our hypothesis:

We correlated the Times Top 50 Employers for Women 2017, Catalyst Group Award Winners for the past 10 years, and the Glassdoor Top 50 in the UK (the PR) against the same companies' actual gender pay gaps (the reality). Here’s what we found.

Our hypothesis was correct. Take a look at the next two graphs and you'll see that many of the companies have huge GPGs despite being highly regarded/awarded. 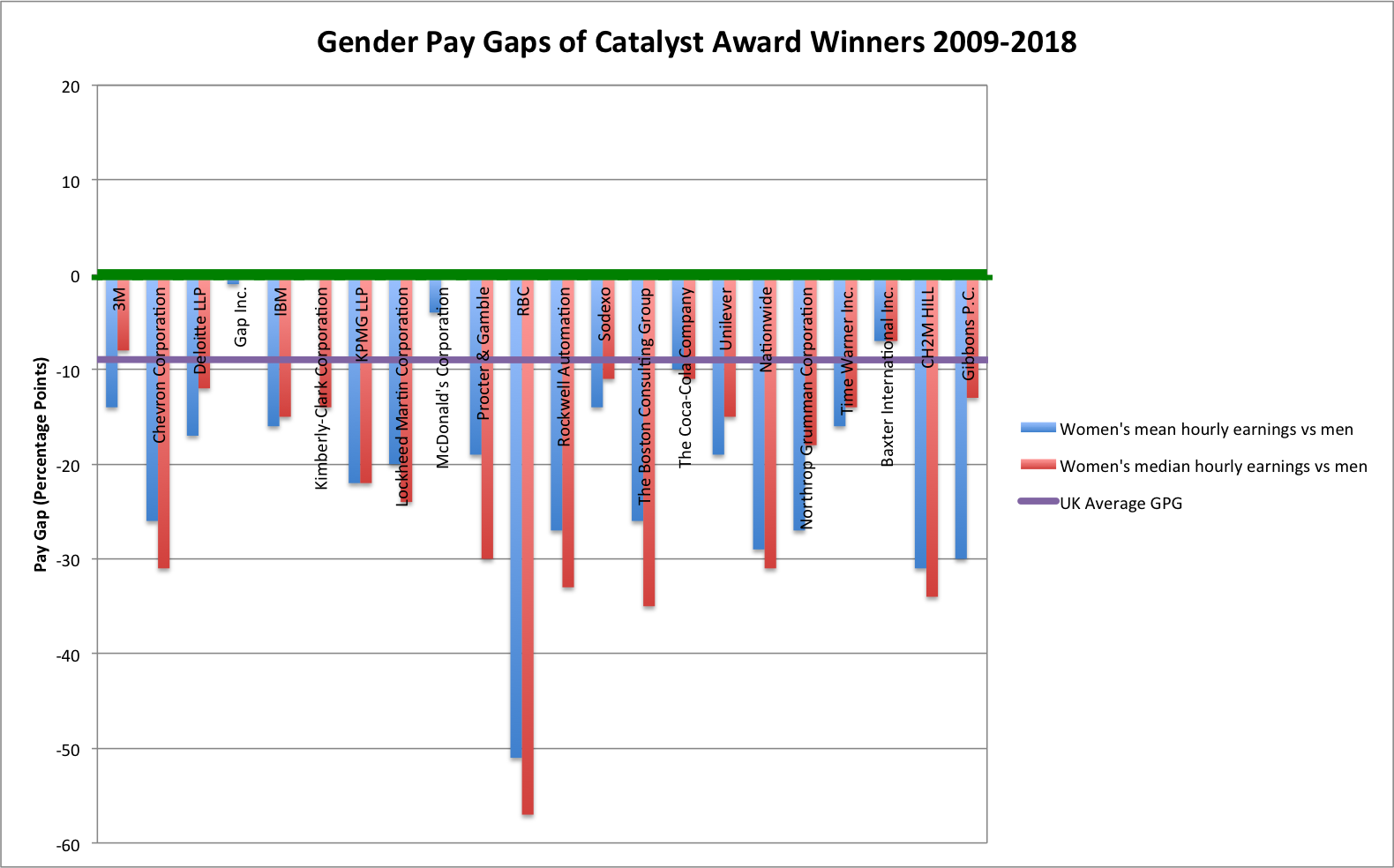 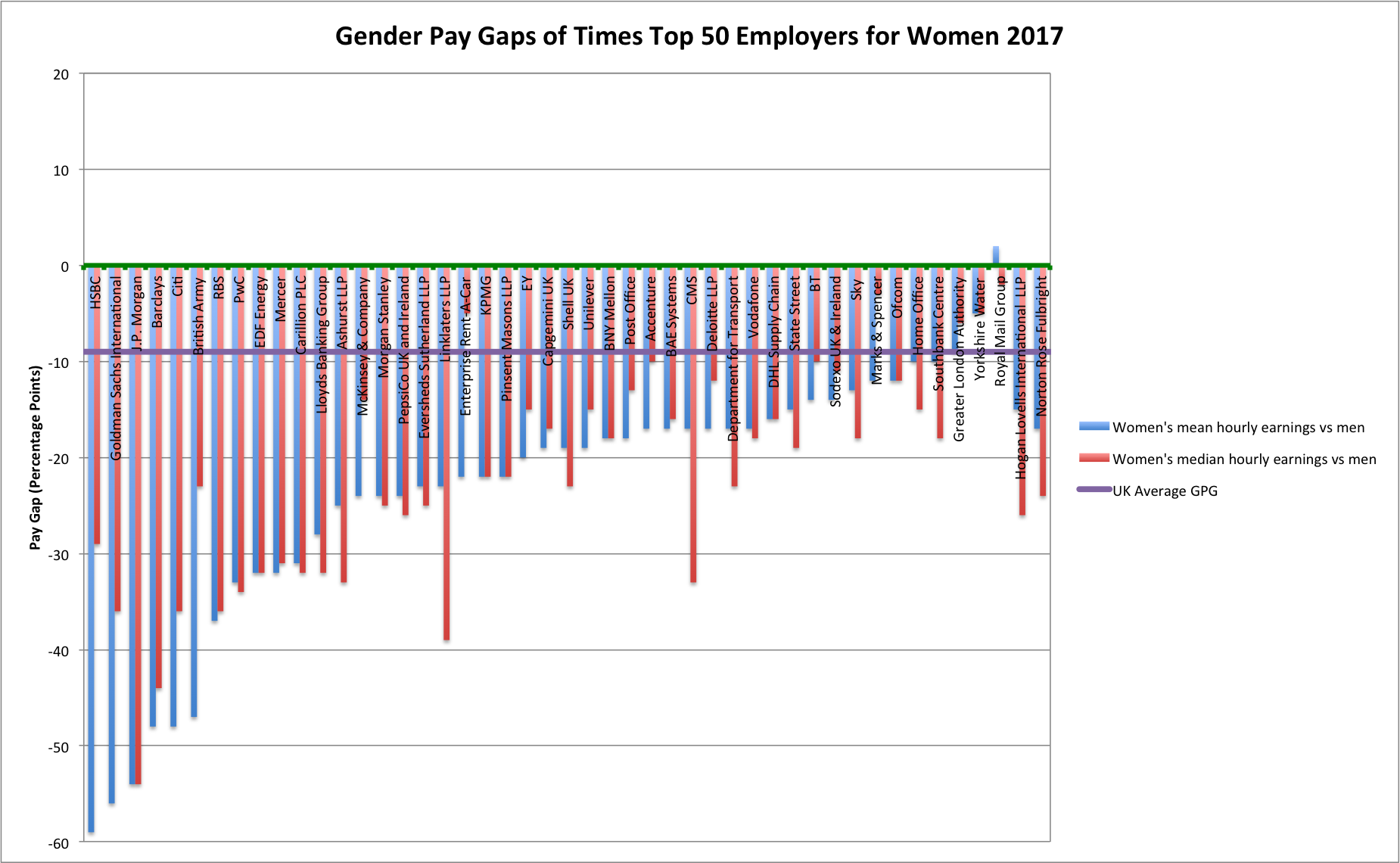 At some of the organisations with the smallest gender pay gaps, we have recently conducted inclusive leadership programmes with largely male teams. The purpose of this is to hold up the mirror (to the men in particular) and re-frame diversity as a leadership issue (for them personally). By taking them on a journey over a period of weeks we can avoid the usual failing of ‘diversity training’ and instead focus on repeated behaviours that sink in over the course of the programme. People internalise diversity as a good thing in their own self-interest and are far more receptive to seeking it out as a result. This has resulted in more men stepping up and calling out behaviours and practices that would disadvantage women.

But training alone doesn’t work. Up to 97% of our behaviour is unconscious - to tackle the majority of our actual behaviour, we need nudges.

We deploy nudges throughout HR processes and systems. We analyse a system (let’s say promotions) and we identify the gaps and biases in it. Then we prioritise which ones to intervene in, and de-bias them by implementing process changes (nudges).

Recent examples include presenting anonymised CVs side by side, implementing mixed panels, and recruiting and assessing groups of individuals at the same time, not individuals one by one.

At one client, we led a series of sessions involving all regional chairmen to map the three-year talent pipeline for the business.

They placed their initial candidates names on a large whiteboard in red ink by groups of one, two and three years away from promotion. Then they re-wrote female names in green. This showed that women had been de-prioritised in the process to date. Candidate-by-candidate, they discussed the business case and the reasons for each candidate’s position and slowly and surely many women started to advance from three years out to two years out to ‘promotion ready’.

We were leading a process to point out the group’s collective blind spots. None of them were maliciously sexist or consciously discriminatory. But all of them had been susceptible to the blind spots of 1-1 promotions, without the big picture view of group aggregation. They simply didn’t know the women as well as the men and the women hadn’t put themselves forward as obviously as the men.  This process resulted in more competition, more rigour in decision-making, and more diversity in promotions

As Bob Diamond said: 'Culture is what happens when no-one thinks they are being watched.' Now they are. You can’t apply a technical fix to a cultural problem and expect to solve the problem. If you really want to tackle the gender pay gap, focus more on the men and less on chasing awards that are masking the real problem.

Stephen Frost is the founder of inclusion consultancy f(i). His latest book, Inclusive Talent Management – How business can thrive in an age of diversity, is out now, published by Kogan Page. For more information go to www.frostincluded.com or find Stephen on Twitter.

By Éilis Cronin
47 hours ago
Women in Business

By Éilis Cronin
20 May 2022
Reputation Matters