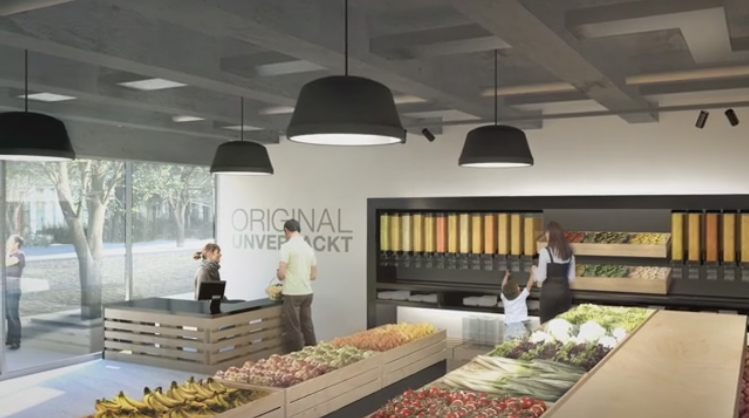 Here in the UK, discounters like Aldi and Lidl have sent the supermarket world into a spin. Morrisons, Tesco, Asda and Sainsbury’s have all lost market share as the Germans marched into their space, all efficiency, low prices and strange foreign packaging.

But a new concept could be about to disrupt the disruptors: Original Unverpackt is a new start-up which completely banishes packaging. Instead of rows of tins, jars and plastic packets, it will have crates and dispensers which will distribute goods like cereal into refillable containers.

The team behind the German (natch) startup has already raised €100,000 (£79,000) through crowdfunding site startnext.de, and it’s now on track to open its first store in Berlin’s Kreuzberg (like London’s Shoreditch) in ‘late summer’.

This isn’t the first time someone has come up with the idea of a packaging-free supermarket: in 2007, a group of entrepreneurs started Unpackaged in Islington, but it closed down in 2013. In the US, it’s been a little more successful: a shop called in.gredients in Austin has been operating fairly successfully since 2011.

But the concept behind Original Unverpackt (which translates as ‘Original Unpackaged’) is a little different: firstly in its clean, modernist design, and secondly in the fact its founders place more importance on packaging (or a lack thereof) than organic, local, etc etc. Yummy mummies and their quinoa-chomping children need not apply…