Ever since the financial crisis trashed any shreds of good reputation the banks still retained, there' been an explosion of innovative new financial companies springing up in the UK. From currency transfer to business funding and personal portfolio management, the financial technology (FinTech) sector is something that London in particular has excelled at.

But one of its most widely-hailed members can trace its roots way back before most people had ever heard the words ‘credit crunch’. Zopa, which allows savers to lend money directly to other consumers (and sole traders) was founded in 2004, making it the oldest peer-to-peer lending website in the world.

For those not up to speed on the concept, peer-to-peer (or ‘P2P') lending essentially works by connecting savers looking to get a better return with borrowers looking for a lower-cost loan. The idea is that by stripping out most of the costs faced by a traditional bank they can offer loans which are more attractive to both types of consumer.

Giles Andrews, Zopa's CEO, didn’t invent the idea but he can be credited with turning it into a seriously disruptive business. The former car trader joined Zopa’s founding team as finance director when they were looking for their initial seed funding and became CEO in 2007. 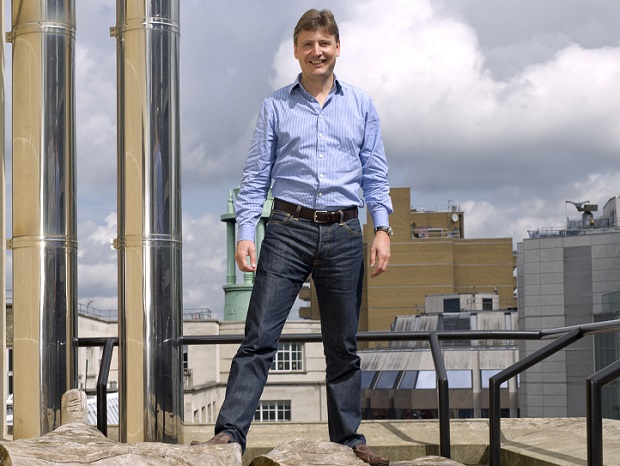 ‘It probably wasn't the right time to launch it, but it was the time we had the idea,’ he tells MT. And a lot of what makes Zopa a success now was true then, just perhaps slightly less true.’ They may not have suffered the shock of the crisis, but banks were always ripe for disruption.

‘By the time the crisis came up and we were three years old, we had a track record,’ says Andrews. ‘If it occurred say a week in then maybe it wouldn't have such a dividend.’ Not only did demand for borrowing shoot up, savers were hit by the plummet in interest rates and were therefore keen to find a better return.

The scene for Zopa’s explosive growth was set. Today the business employs more than 100 people and has 51,000 active lenders. Since launch more than £887m has been lent through its platform – including £280m in 2014 alone and its latest available revenues (2013) hit £5.4m. Though it's not currently profitable - apparently because it's investing in growth - Zopa managed to get into the black in 2011 and 2012.

So how can it keep up the momentum? 'Personally it's not difficult,' Andrews says. 'Leading it's not always the easiest thing in the world, but the motivation to do so is absolutely not a challenge at all. I think it's the same answer for the business...we've been able to, as we've grown, offer people new and bigger challenges which has hopefully retained some enthusiasm.'

Big injections of cash haven't hurt either. According to Crunchbase, Zopa's received a total of $56.6m (£36.5m) from backers including Balderton Capital and Wellington Partners. In 2012 Zopa landed £10m from the Government's Business Finance Partnership, which was created to boost alternative sources of lending. Last month it announced a tie-up with Metro Bank, which will see the challenger lend an undisclosed amount of funds to Zopa's borrowers.

Some might lament a bank getting its claws into 'alternative' finance, but Andrews says Metro's involvement will improve its ability to lend. 'When...the demand gets out of balance, it's helpful for us to have some more money to act as a buffer,' he says. 'In order to allow us to grow more predictably, and to invest more money into marketing that we know will work, we have to have alternative sources of lending capital.'

He also thinks it should reassure customers that Zopa is financially sound. 'For an institution like Metro Bank, that's ultimately lending its depositors' money, they have to justify to the FCA that they're making a sensible decision to lend their money on our platform,' he says. 'They've had to crawl all over it. The level of due diligence from men in grey suits who work for banks, I think should be terrifically assuring to retail consumers because they can't necessarily gain that access themselves.'

Along with direct competitors like Lending Works and Ratesetter, Zopa was a founding member of the P2P Finance Association, which has successfully pushed the FCA into creating a new set of regulations specifically for their industry. Zopa's now responsible for around 2% of unsecured consumer loans. Clearly that's not a monumental amount, but has it made the big banks sit up and take notice?

'It's very hard for them to recreate our business model because clearly they're banks and everything they do is regulated as a bank,' he says. 'But I think one of the things that they've worked out is this level of customer focus, which has disrupted other industries. So they're building propositions that are really driven by what customers want, is something that they're trying to work out how they learn from it.

'It's very very hard for them to be customer driven but I think it's changed some of their perspectives. Whether or not they can turn that into a changing behaviour rather than just something they're thinking about is a different question. I'm not convinced they can. That's not because they're bad people, it's because of the scale of the operation and the distance between them and the customers.'

Zopa benefited substantially from the massive drop in interest rates after the financial crisis. So if Mark Carney and his committee decides to up the base rate, could it be brought back down to earth with a bang? Andrews says not.

'Any Bank of England rate rise would mean an increase in personal loan rates, this for Zopa means passing on that increase directly to our lenders so our rates of return would therefore increase,' he says. 'For borrowers it means loan rates would rise depending on the market but Zopa would remain competitive and market leading.'

In the past Zopa's made some ill-fated attempts to expand to the US and Italy, but for now Andrews says he's focused on the domestic market. While it currently lends to sole traders, he says there are also no plans to start lending to limited companies – a space that's being dominated by fellow P2P lender Funding Circle.

'We've got just about 2% market share of the consumer unsecured loans market.' he says. 'And that gives us an enormous opportunity, without changing what we do, to grow a factor of 10 times bigger than we are today and that's what we're pursuing now. If we got to the point that that's no longer interesting because the growth was levelling out then we'd look at other things or perhaps internationally, but we don't have any plans right now.'