Today, I'm going somewhere that is usually past the point of no return, as I head down below to join Thames Water for a day as a sewer flusher.

I arrive at the western division's Hammersmith HQ at 7.30am, where boss Phil helps me get an idea of what flushers actually do: monitoring the sewers for wear and tear, clearing 80,000 blockages a year, caused by everything from condoms and tampons to nappies and wet wipes, and, crucially, dislodging the vast accretions of fat that congest the tunnel walls so that the system can continue to function as its canny Victorian designer, Sir Joseph Bazalgette, intended - even as more and more people arrive in the city to do their business.

There's a strong sense of camaraderie as we gulp down our teas and pile into the Thames Water van; it's as if we're riding into battle. I'm in the back, across a table from Tim, who talks me through the maps of the territory - on which the sewers are highlighted red and our manholes pink.

Our first point of contact is in Stamford Brook, a manhole by the mini roundabout outside Carpetright.

We kit up in overalls, waders and utility belt. I follow Tim down the metal ladder, rung by sludgy rung, into a dank weir chamber, where I'm greeted by the smell of sulphur and a couple of beached condoms. 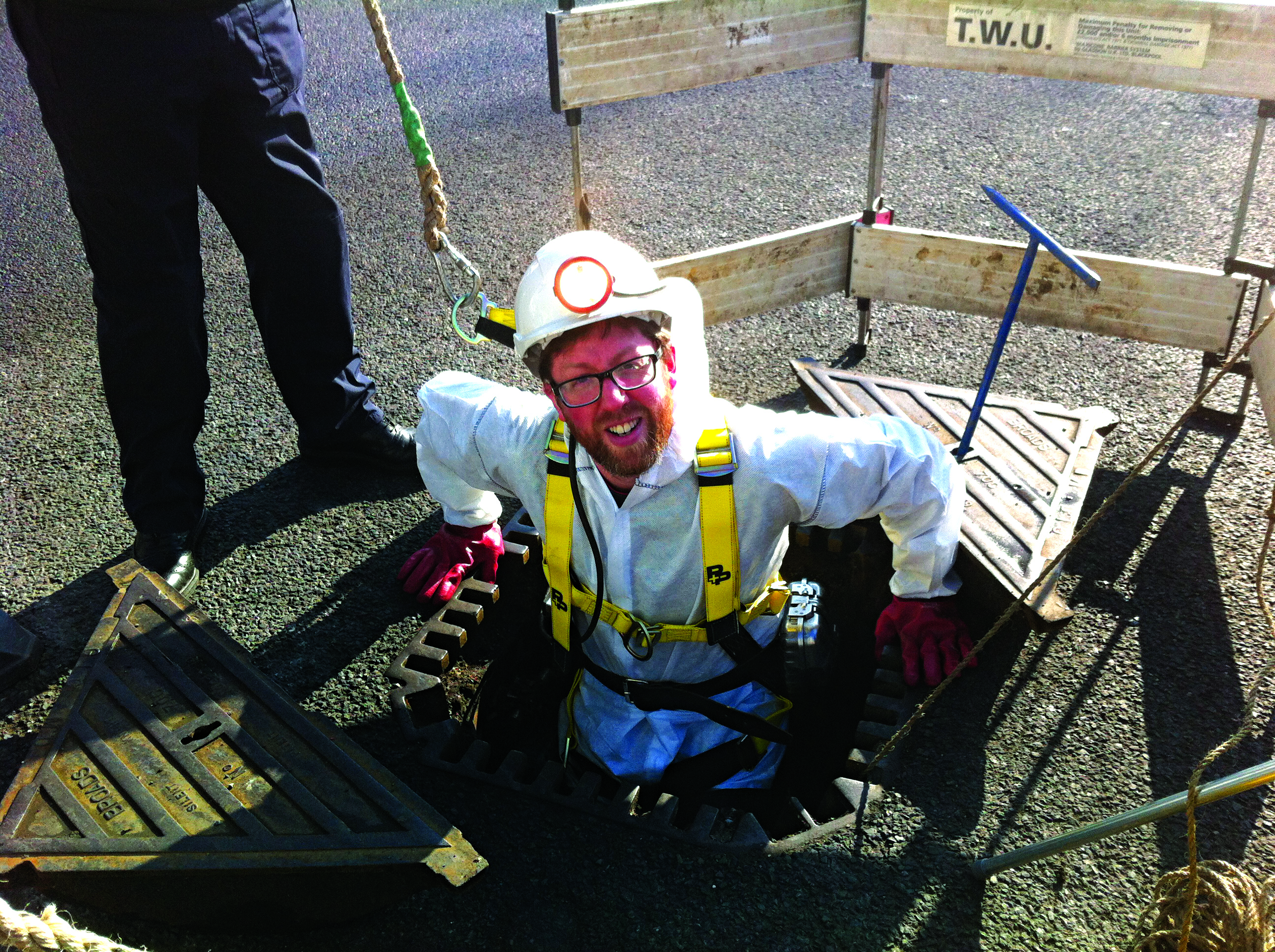 At chest height to my left is the slow-moving mainline east branch of the trunk sewer, disappearing beyond the wall of the chamber into the darkness. To my right is a metal railing guarding a steep drop down to the Hammersmith storm relief sewer beneath.

We have to divert the flow down to the lower level for a day, to help prevent silt from clogging the trunk sewer. Tim has clipped himself to the railing and begins removing the wooden boards that hold the effluent in.

Suddenly he's right in midstream - a relentless torrent bouncing dramatically off his wader tops and cascading around him into what now looks like - and is, really - a giant flushing toilet.

'It's hard getting a girlfriend with this job,' Tim admits once we've returned above ground. We disinfect and disrobe in the back of the van, and I ask if he likes it. He says, yes, a 'tremendous amount'. But, then again, his previous job was digging graves. 'That gets to you after a while, being surrounded by death all the time.'

Phil, another flusher, reckons that the effluent isn't as bad as it seems: 95% is water, with a mere 5% the less savoury stuff. But then he starts describing the massive problem of central London's subterranean fat, which clings to the tunnel walls, solidifies like cement, and gradually chokes the city's effluent arteries.

It's largely caused by restaurants pouring waste down the drains, and this part of the job still troubles even a seasoned flusher like Phil: sweating in the summer heat, nose under attack from the stink, swinging a pickaxe until you're so greasy that you can no longer hold the handle, or grip the ladder that provides the only means of escape. It gets so bad it can be hard to breathe, the oxygen in the air absorbed by the vast fat deposits.

But today at least the laughs flow freely as we head to Chelsea Embankment, to descend beneath the leafy grounds of the famous hospital in search of systemic constipation. The lads take pride in their work, knowing that they're doing something that matters: keeping London's beautifully built but ageing sewers functioning under increasing strain, while minimising the environmental impact. A new recruit can expect to earn around £21,000 a year.

As we return to Carpetright to finish off, I ask Phil if he's had any hairy moments. 'Big time,' he says.

A couple of years ago they'd routinely closed a six-ton pen stock valve at Cranford Bridge to control flow, and when they went to open it again the spindle snapped off. The gate remained shut for a couple of days and the sewer backed up and overflowed. It flooded the Sheraton hotel, and was only a few hours from forcing the closure of Heathrow airport. In the end, 3,000 fish were killed when the sewage went into the river Crane instead.

And that's the downside to being a flusher: day in, day out you're dealing with everyone else's crap and no one even notices. But on those rare occasions when it comes back to haunt them, the shit can really hit the fan...