Greece’s battered economy grew 0.8% in the second quarter of this year. That’s more than Blighty. But is it a glimmer of hope emerging over the Aegean or austerity doing funny things to the Greek statistics department?

Probably neither, if we’re honest. Here’s a few possible reasons for the surprise growth

1. Greece’s economy is still yet to recover from a bigger relative contraction than the US during the Great Depression. That means any change comes from a very low base, making even the tiniest levels of growth worth more in relative terms. 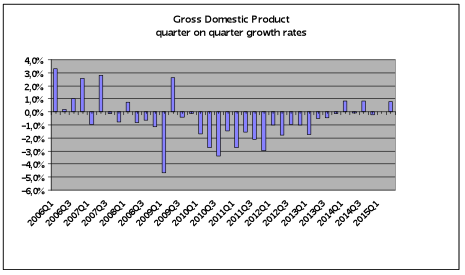 2. It’s only a ‘flash’ estimate, so could be revised – although changes aren’t usually by more than a couple of tenths of a percent.

3. There have been one-off increases in Greek GDP before, so it’s conceivable there could be a similar temporary factor behind this one.

We saw a freak result for #Greece #GDP like this back in 2010 and the reason then was a sharp fall in imports which boosted the numbers.

4. This is the big one: Greece’s economy is in a severe state of deflation right now, with prices shrinking 2.2% in July compared to the previous year. That 0.8% growth was on a real basis, adjusted for the falling prices. On a nominal basis, the economy actually shrank 0.7%. Not good.

Moreover, things are only going to get worse in the short-term, as the ongoing devastating impact of three weeks of capital controls, which were mostly in July won’t show up until the third quarter. Did we mention unemployment is 25%?

Meanwhile, it’s still not clear that the Germans have given any ground on Greece’s plea, backed up by the IMF, for much-needed debt relief. With the third bailout package, which still needs to be approved by both the Greek and German parliaments, filled with yet more austerity, GDP won’t be rising very far or fast for long.