It has been four years since three lads from Scotland brought us Lycra, like we’d never seen before. MorphCostumes burst onto the scene in 2009 and quickly became a fancy dress phenomenon – its skin-tight, head-to-toe suits are a regular spot on at any festival, stag do or Halloween party.

We caught up with one of the founders, Gregor Lawson.

1. If you had done something else, what would it have been?

I'd have been a criminologist - it was the subject I was best at in university and I found it really interesting. It was a module in my business studies degree (for some reason).

2. What else would you name your business?

Supersuit was something we discussed before going for MorphCostumes - but it makes you think of Superman suits, so we decided against it.

3. If you could be based in another city, where would it be?

New York – I just love the fact that wherever you are, whatever you're doing, even just walking around doing mundane things – you feel like you're on a movie set. Things are cooler, more futuristic than any other city, the food is great. If I moved there I'd definitely be cooler, I'd buy myself a great pair of glasses (even though I don't need any).

4. When you started, how did you raise money?

We all had savings so we chucked in about £3,000 each – we spent it on a basic website, some stock and not a lot else. We grew quite organically and remained self-funded until our second or third year. We have a huge sales peak around Halloween and we have to spend heavily to stock up so that's why we took our first round of investment.

5. What has been your most important decision so far?

Launching the brand using Facebook. True enough it was born out of necessity, we had no money for print ads and the like, but Facebook fitted well with the brand, the image and how we wanted to communicate. It also allowed us to engage with a global audience. Picture sharing is such a huge part of our brand and using Facebook allowed us to encourage that among our audience. We have around 1.2 million Facebook fans.

6. What has been your biggest mistake?

Last year we uncovered a trend for dressing up – it's called slenderman, it's basically a creepy guy who wears a suit. We only uncovered it a month or two before Halloween and decided to really go for it. We ordered lots of stock but it didn't sell well enough, we've still got a lot left to shift. Hopefully we'll see some go this year.

7. What idea do you wish you had come up with?

Spotify is really cool. I love music and even though I don't agree with the way they do everything – it's a really brave idea and it has given us a new way to listen to music. Also, by all accounts it has been very successful for the founders. Working on something you love is important – I've always loved dressing up so while my job is challenging, it's also great fun. At the end of the day you've got to enjoy your job. 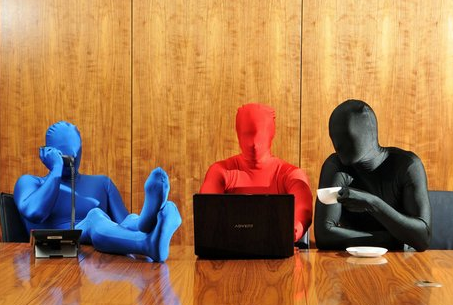 8. How do you handle stress?

I get a bead on at least once a day. I run to work and that starts the day off well, I feel refreshed by the time I get there and more awake. My business partner also turned his garage into a gym so we often go back there and have a work out and talk sh*t. It's not so much a way to beat out frustrations as a good way to split up work time from home time. I'm always left with more energy than before too – working out doesn't tire me out.

9. What was your first job?

I was a kitchen porter in a pub in Kinross, Scotland. I remember it so well, it was horrendous. I was the lowest of the low in the scuzziest place in town. It really hammered home how hard it can be to make money. I would work my ass off and come away with £20,

I did door-to-door sales for a while, which was challenging. I did actually learn a lot – it's so hard knocking on doors and striking up a conversation, it's a short relationship and an amazing skill. I had the privilege to go out with some of the most skilled people, who really had the gift of the gab. It was a bit scary though going out to some of the dodgiest parts of Scotland and knocking on doors. It taught me to communicate with a whole range of people though – and think on my feet.

I'd probably say Procter and Gamble, I was in the beauty arm, working with brands like Pantene, Head and Shoulders, Max Factor etc. I was a mini boss in Ireland, a smaller country than the UK, which was great and it was pre-meltdown, around 2006, which was a great time to be there. Procter and Gamble is a huge business, so quite bureaucratic and restrictive but because we had a smaller division we were able to freestyle a bit more. I also got a taste for Guinness while I was there. I played rugby and we used to drink a lot – start with Guinness, then lager, then cider, then shorts (all after the games of course).

12.  If you were on the Apprentice, what would your team name be?

13.  Which company would you invest in right now?

Maybe Genius Bread - it's gluten-free and run by lady I've met a few times. I also know one of the investors, Sir Bill Gammell and I've spoken to them a few times. I admire their intent, it's a nice brand and getting into healthy eating. Some of the gluten-free stuff is horrendous, I bought some gluten-free jam tarts once and I took one bite and it was awful. They have started to cross the divide between making something just for gluten-free diets and something everyone would enjoy.

14. Apart from property, what is the most expensive thing you’ve bought?

My car for £4,000 - it’s a Mercedes SLK and I love it but I stupidly listened to my friend Gregor (another one) and he suggested I paint the wheels gold. That was a mistake. It looks ridiculous. It’s a convertible, which I really wanted to get after I’d had a go in a friend’s one but now it looks wrong. Often when you have a convertible people will say it’s a hairdressers’ car but no self-respecting hairdresser would drive mine.

Jeans all the way – actually, I don’t even have jeans anymore. I wear morph suits most weeks so my whole wardrobe has changed. If I'm not wearing something extreme in someway it just doesn’t feel good. So instead of jeans I’ve got bright orange trousers, blue trousers – that sort of thing. Today I’m wearing mint green shorts and a vest.

Fixed - the reality is, I work a big chunk of the day and because we have 23 people working in our office, it wouldn’t be okay for me to come in at ten and leave at four. I’ve got to be in the office.

17. What is your favourite thing about your office?

We listen to the radio, which is great…and we have a dartboard.  Our radio station varies but we really like an Edinburgh station called Castle FM, as that's where we're based. There are often long periods of silence for no apparent reason on it, which I think is hilarious.

Strada – it’s a running app and tells you how fast you go and how far. I’m doing the Great Scottish Run soon, which is a 10k so it’s really useful for my training.

19. Who is your business idol?

My dad – he always had a great work-life balance. He played sport a lot, while being MD at this company Kirkcaldy. I always remember him coming home and talking about the things he had implemented that day. We worked his way up in business which I really respect and he taught me to enjoy what you do.

20. If you were Prime Minister for the day, what would you change?

I’d change the last bank holiday in August to a fancy dress day. I would make it compulsory for everyone to wear fancy dress. Yes, it would be beneficial for my business but at the very core, I would do it because I think fancy dress makes a good time a great time.

This article was first published in September 2013.

Want to meet Greg Lawson and hear from Scotland's top business leaders? Join us at MT Live Edinburgh on 4th February. Find out more about the event here.

Innovation Leadership Retail Clothing MT Break: If I Had to Start Again

It can come back to bite you if you get it wrong.