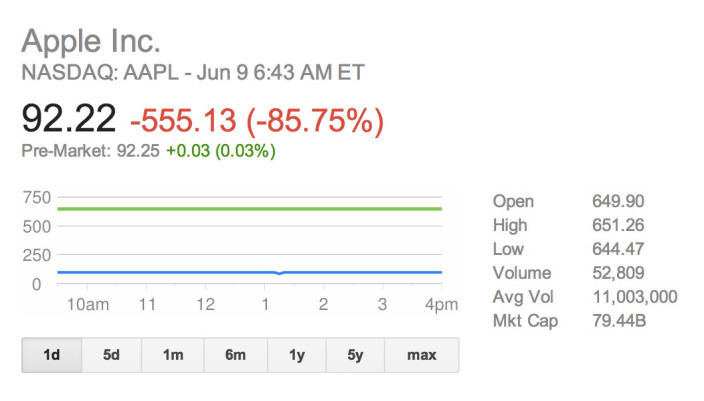 Obviously, though, that’s not really what happened: the company merely underwent a stock split, where each of its shareholders were issued with seven new shares for every share they owned, at a seventh of their price when the market closed on Friday. Apple announced back in April that it was planning a split. Since then, its share price has risen 23% (before, you know, dropping by quite a lot).

Current shareholders aren’t the only ones who will be happy. The split will open ownership of its shares up to new investors who were priced out of the market. It could even, suggest some analysts, pave the way for inclusion in the Dow Jones Industrial Average, which tracks ‘key sectors’ of the economy. So far, Apple has been excluded because its selection committee avoids stocks worth more than $300.

This isn’t without its risks: in 2000, the company did a two-for-one split. Later that year, its share price fell 57%. To be fair, that was during the dotcom bubble – but given recent tech valuations, some analysts suggest we’re not far off dotcom bubble 2.0 now. Which would be very unfortunate timing…