House price growth is ‘starting to moderate’, said the closely-watched Nationwide House Price Index this morning: month-on-month growth fell to 0.7% in May, down from 1.2% in April. Agents and those with homes on the market might not be happy, but for the rest of us, that’s pretty good news.

Does this mean the end of spiralling house prices? Maybe. But it’s worth pointing out that we thought they had peaked in December, when the month-on-month rise hit 1.5%, then dropped to 0.9% in January and 0.7% in February, before rising to 1.2% in April. As you can see, growth has swung around a lot – so there’s no guarantee it’s on a downward, or indeed an even, trajectory.

Are rising prices the fault of Help to Buy, the government’s mortgage scheme? No, says Nationwide – on two counts. Firstly, because relative to the market, it’s pretty small. First-time buyers accounted for 48% of all house-buying activity in March – and 80% of those who borrowed under the Help to Buy Scheme.

‘However, the modest numbers involved so far suggest that Help to Buy is unlikely to be the main factor behind the recent pickup in the wider housing market,’ said Nationwide chief economist Robert Gardner.

’12,853 Help to Buy mortgages were completed in Q1, equivalent to around 9% of the total mortgage completions over the period.’ 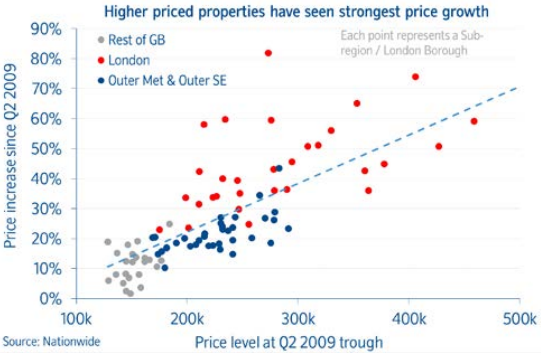 But the majority of Help to Buy loans have been on ‘transactions where the property values are below the national average’. So that’s that theory out.

But George Osborne is clearly still worried, if a report by Sky News is anything to go by. The chancellor has apparently called a meeting of major housebuilders to ‘discuss issues’ around supply of housing.

When Help to Buy was introduced, the argument went like this: if we increase demand, housebuilders will be motivated to increase supply. But housebuilders argue difficult planning laws make it impossible to build more. Some critics, on the other hand, go as far as to suggest they’re deliberately keeping supply low to keep margins high.

No word yet on what will be discussed during the meeting, but it’s worth pointing out that so far, Osborne has gone for a carrot, rather than stick, approach with housebuilders, introducing measures designed to gently encourage them to build. But it sounds like he’s getting frustrated – particularly as the election approaches. Housing will be a key issue in the campaigning. And we’re still 200,000 homes a year short….