If there’s one thing us Brits love to yack about, it’s property prices: thus, we all know prices are at a record high, and most people need to sell a limb or two in order to scrape together a deposit for a postage stamp-sized place in the capital.

And yet! And yet. Investment adviser London Central Portfolio, which advises primarily on ‘Prime Central London’ property – mansions in Notting Hill, etc – reckons housing is actually at its most affordable in 35 years. Huh?

Admittedly, a central London property adviser saying housing is affordable is pretty predictable - this definitely doesn't mean there's no bubble. But, says LCP, it’s all to do with interest rates.

‘[At the moment we are] just pipping 1995, when the market was experiencing a strong bounce-back from the significant downturn of 1989,’ it says.

‘This was the period when affordability was at its most strained in the face of the 100% increase in interest rates over one year, together with the doubling of house prices in four years. This was the catalyst for a nosedive in property prices, which corrected when balanced out.’ 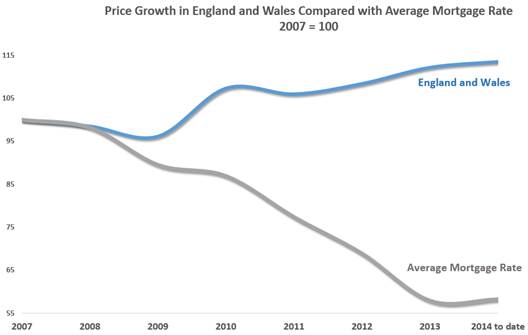 In other words: although buyers now have to pay sky-high deposits, interest rates mean monthly mortgage repayments are relatively low, compared with 1995, when interest rates rocketed. So house prices may be three gajillion times average annual earnings (more like 10, actually, but who’s counting?) – but our monthly repayments are actually fairly reasonable. 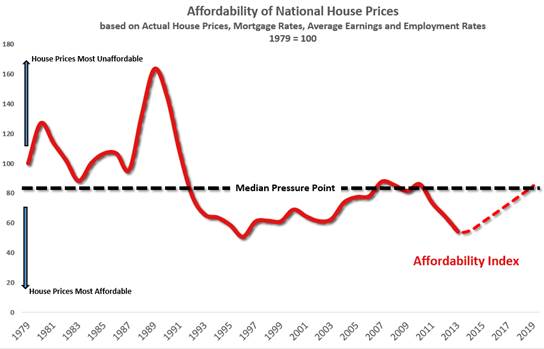 What’s interesting is that LCP also cautions against the Bank of England using its new-found powers to cool the housing market. The powers, imbued by George Osborne, means the BoE’s Financial Policy Committee can take steps to make mortgages more expensive, thus calming the house-buying frenzy currently pushing up prices.

By LCP’s calculations, the mortgage market ‘could sustain a gradual rate rise of up to 5.1% over the next five years’, assuming unemployment keeps falling by 2% a year and earnings rise 3.5% a year.

‘Any move to increase mortgage rates [to above 5.8%] would see the affordability crossing the median pressure point in the market, which could see a catastrophic fall in property prices,’ it warns.

‘Were house prices to grow at a much higher level, in line with the long-term average of 10.9% since 1969, mortgage rates could instead only withstand a smaller rise to 4% over the same five-year period, without similar negative fallout.’

Or, as Spiderman’s Uncle Ben once said: with great power comes great responsibility…