Britain is one of the biggest online shopping markets in the world, but one sector remains stubbornly stuck with bricks and mortar - food. The big supermarket chains may be struggling but the vast majority of groceries are still purchased in-store.

That’s not for lack of trying. The major supermarkets have launched their own online shopping services, Ocado got going way back in 2000 and tech firms like Amazon and Google have been looking to get in on the action too. But transporting and delivering food is costly and complicated, so in the low-margin world of e-tail profits have been hard to come by.

But perhaps Marisa Leaf has come up with a model that could work. The company she founded, Hubbub, lets customers choose produce (from a chunk of Comte Grand Reserve to organic eggs and Californian sourdough) from a plethora of independent food shops. It’s then collated by Hubbub’s delivery drivers and dropped off in one go. Some customers pay a variable delivery fee of up to £5.99 and Hubbub also takes a cut of the sales.

As with so many start-ups, Leaf devised the idea in response to a problem she had in a past job – in her case as a human rights barrister. ‘You have very long and chaotic working hours because your clients do,’ she tells MT. ‘By the time I’d leave chambers it would be 10 or 11 at night and the only places open to buy food would be takeaways or supermarkets. I really wanted to eat better than that.

‘But I also felt I spent every waking hour trying to make the world a better place but I was spending my own money by putting it in the pockets of Tesco shareholders. I wanted to support the men and women who made the place I lived somewhere I actually wanted to live...the small butchers and bakers and guys that worked in [Islington’s] Chapel Market that made it a proper community.’

Selling online is a big challenge for any single independent store that sells perishable goods. The logistics would be hard to organise and in most cases they can only sell part of a ‘basket’ – cheese or meat or wine or cake – not enough to make a full meal or feed a family. So Leaf came up with a plan to aggregate her local shops into one online food delivery service.

That wasn’t without its challenges. ‘I couldn’t drive at first so I learned in 10 days and persuaded my boyfriend, now my husband, to let me do the deliveries in his mini,’ she says. A friend of her brother developed the pilot website, but initially the back-end was all done manually – Leaf had to pass on the orders to the shops and organise the route plans herself.

After enjoying some initial success the business needed to raise some cash to build a better online system. ‘Every time we got a bit of good press people would write and say "I love this business do you need any investment?"’

After raising ‘two or three’ angel rounds worth several hundred thousand pounds, Leaf was introduced to William Reeve, one of the founders of the successful DVD subscription service LoveFilm and a prolific backer of British tech start-ups including Graze and Zoopla. ‘He made me understand that I had a much more valuable business in many ways than I had realised,’ she says. In 2014 he joined the business as co-CEO and the pair managed to raise a tasty £2m from venture capital investors including Octopus Ventures. ‘That money really allowed us to acquire customers – we’ve acquired a lot more in the past 12 months than in the whole history of the business before that.’

She’s keeping quiet on revenue figures but Leaf says Hubbub now employs 17 people plus a fleet of delivery drivers that varies in size and that it’s now profitable in its ‘most mature’ areas. It has attracted the attention of some big retail names including Etsy’s Nicole Vanderbilt, now a non-executive director, and former Tesco.com COO Barney Burgess, who sits on the advisory board. 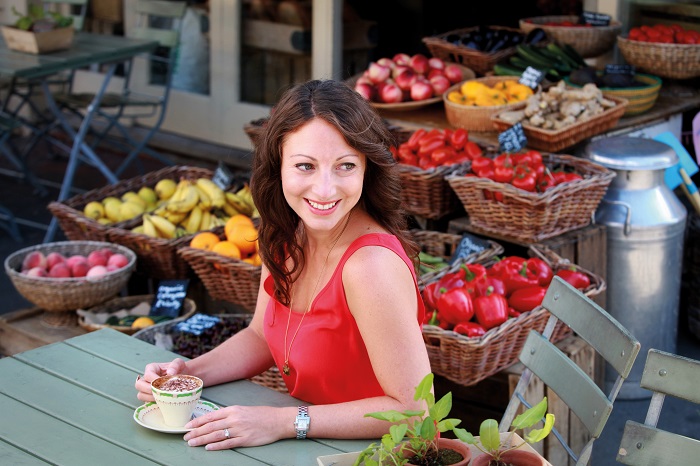 With its upmarket produce Hubbub is going after a similar set of customers to its well-funded giant rival Ocado. But Leaf says her company has an edge in the form of its low-cost business model. ‘We don’t hold any stock, we don’t have to do any picking or packing, we don’t have any warehouses so our capital costs are much lower.’ As a result, she says, the cost of fulfilling a typical Hubbub order is around half that of its rival.

That’s especially useful given that shoppers are buying food more frequently in smaller amounts. And it also makes it easier for Hubbub to scale – ‘If we want to launch in a new area we simply need to partner with local shops rather than starting from scratch,’ Leaf says – no need to build any warehouses or buy tonnes of stock.

A cynic might wonder whether such a model makes it hard to provide a consistently good service but Leaf says there are systems in place to make sure all the moving parts work together. ‘We track all orders, substitutes and complaints and report these to our suppliers, both against their historic performance and against others in their category – this allows us to identify and resolve any issues quickly,’ she says. ‘It’s also important to remember that we’re working with shops who are experts at what they do – product sourcing and preparation - and who take enormous pride in what they make, source and sell.’

In June Amazon launched its assault on Britain’s grocery market with the launch of Amazon Fresh, which offers food from independent shops as well as its own range of generic goods. For many entrepreneurs the prospect of competition from the world’s second-largest retailer would be daunting but Leaf seems unfazed.

‘They approached all of our suppliers and none of our top 30, 40, 50 probably, agreed to work with them,’ she says. ‘Looking at Amazon Fresh I think you would struggle to get a whole basket, certainly to do your weekly grocery shop from these kinds of [independent] shops. So no, we don’t perceive it as a threat.

‘There’s also a brand issue. Most of these shops have worked their whole lives to build up a brand and they don’t see Amazon as a friend of the high street and they don’t believe that Amazon is really out to help them build a bigger and better and lasting business.’

It’s easy to see how Hubbub’s model works well in London, with its high density of upmarket food shops and people willing to shop in them. But Leaf is adamant it could work in other parts of the country, and internationally too. ‘We’ve identified 65 cities where we think Hubbub would work really well,’ she says. ‘London is very dense but it also has a lot of traffic. In other places you might not have quite the same density but the time to move between addresses will probably be faster so there’s a trade off.’ Nonetheless she’s planning to stick to the capital for the next 12 months ‘unless there was a particular opportunity that presented itself.’