My parents had careers in the military – my father was a radio technician in the RAF and my mother was in the Women’s Royal Naval Service – and they both ended up working in electronics factories in Fife, part of Scotland’s “Silicon Glen”.

I was an only child, I went to the local comprehensive school, and my horizon didn’t stretch beyond my home town.

Then I won a place at Cambridge University and I was catapulted into a very different world; up until that point, I wasn’t even aware the “middle class” existed. I was sponsored by the Ministry of Defence to do a degree in natural sciences, ended up switching to economics then joined consultancy firm LEK when I graduated. 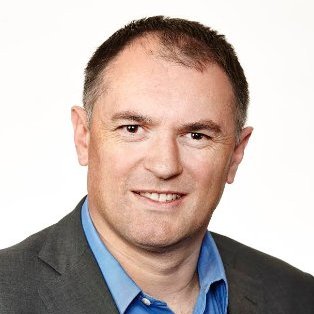 That first job in consultancy taught me skills that I still use today: I learned to read balance sheets, build forecast models, and gather and interrogate data.

That said, I quite quickly worked out that I didn’t want to be a consultant forever: I wanted to be on the other side of the table, making the decisions rather than offering advice. I joined Mercury Communications, the first competitor to BT, and that’s where I got into the commercial side of business and discovered the lure of chasing numbers, targets and KPIs.

Next came a decade at Sky, followed by four years at Vodafone, where I looked after consumer sales and retention activity, including the stores. That was the beginning of my passion for high-street retail.

I jumped at the chance to join Game in 2010. The opportunity to be the CEO of a plc doesn’t come along every day, plus I’ve been a gamer my whole life – I felt like I understood the customer.

I knew the business was in trouble and it was going to be a tough gig: the impact of Nintendo’s Wii console had faded, we had too many stores (more than 600 in the UK), revenues were falling and the market was shrinking by 15 per cent a year – but I joined with optimism about the chances of a turnaround.

I learned the hard way that a bad market will kill a good business.

I remember stumbling out of the office of a big London law firm at 2am one January night in 2012. My team and I had spent the preceding 18 hours negotiating with our own banks over the future of Game.

My overriding thought that night, apart from how on earth I was going to get home to Oxford (all the trains and tubes had stopped running), was that we weren’t going to be able to save the business. That was the moment I knew it was ‘Game over’.

The business went into administration in March – and it was a horrible, bruising experience for everyone involved. I didn’t allow myself to wallow in self pity but I did vow to spend the rest of my career working with retailers to make sure they don’t suffer the same fate.

The cost of a business failing to suppliers and creditors, to shareholders and lenders but, most of all, to the people across the business, who end up with statutory redundancy pay and no job after years of service, is simply too big to be acceptable.

After Game, I spent nearly three years at Odeon and was part of the leadership team that turned the business around – doubling profits from £50m to £100m and transforming a relatively lacklustre employer into one of The Sunday Times’ Best 100 Companies To Work For.

Last year, I wrote a book called Reinventing Retail, which was my attempt to extract lessons from my successes and the things I should have done sooner or better.

There are six truths retailers will have to get their heads around if they are going to stand a chance in what I call the “new normal”:

1. Someone is going to sell your product at cost or even less.

2. Everyone knows everything – nothing is a secret.

3. Reputation matters and will make or break a business.

4. Location matters – customers want to spend time in stores that are fun and interesting, and where employees are passionate and engaged.

6. If a product or process can be simplified, it will be.

We put too much of a spotlight on individual CEOs. We should be looking at what kind of community they’re building, what kind of culture they’re creating and what kind of example they’re setting to others. The best leaders put their egos to one side and exhibit EQ as well as IQ in the way they run their businesses.

My work life and my family life are distinct from each other. I’ve never been one of those executives who lives and breathes their job 24 hours a day. I’m lucky, I can switch off.