Noelle Chen was sitting in a meeting in Beijing with 40 other people, negotiating the sale of a mining company, when the insult was hurled at her from across the table. The offender had assumed that 28-year-old Chen was an analyst. Actually, as the youngest manager on Rio Tinto's global business development M&A team, she had coordinated the entire deal. She was the boss.

'It was a red rag to a bull,' says Chen, originally from Singapore. 'I stopped the entire meeting, explained my role and made her [yes, that scathing remark came from another woman] apologise.'

It was a move that took self-assurance, confidence and guts - qualities that this year's 35 Women Under 35 have in spades. Whether they're working in fashion or funerals, tunnelling or technology, banking or beer, this talented and fiercely ambitious group of women know their worth and refuse to be tied down by other people's prejudices.

Take Catherine Thomas. She decided she wanted to become a lawyer at the age of 10, after taking part in a school debate. By 17, she was considering applying to Oxford University. Her teachers laughed in her face. 'They told me it was a stupid idea and a waste of an application. I went to a state school in Wales and apparently "people like me" didn't go to Oxford,' she says. 'My A-level teacher mocked me relentlessly in front of the entire class and said I would embarrass myself. In truth, their reaction was a gift. I knew I had to prove them wrong.'

Thomas did get into Oxford and she now holds an MA in jurisprudence. She was made partner of a family-law firm by the age of 26 and is now a senior director at Vardags. She's widely regarded as one of the top divorce lawyers in the country.

Fran Millar, one of the founding members of Team Sky - the British pro cycling team that won the past two Tour de France races with Sir Bradley Wiggins and Chris Froome - describes herself as 'fearless'. 'When I used to tell people I worked in cycling, they assumed I meant in a bike shop,' she says. 'This industry is an old boys' network but that has never bothered me. I just assume people will judge me on my work, not on my age or sex.'

Smruti Sriram, CEO of eco-packaging firm Supreme Creations, shares that sassy attitude. 'I remember meeting Tesco's head buyer when I was 24 and pulling off a £1m-plus deal,' she says. 'If there's discrimination, I've chosen not to feel it.' 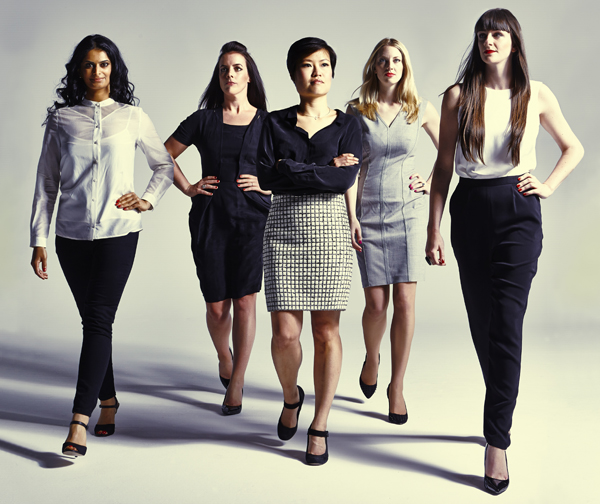 Sriram and Chen both point to their mothers as strong female role models. Chen's father had a stroke when he was 35, so her mum became the main breadwinner: 'I grew up thinking, if she can do it, so can I.'

Lauren Currie's high-school mission was to become the next James Dyson. Graduating from the University of Dundee with a master's in design, she realised that the same principles that led to the creation of Dyson's market-beating vacuum cleaner could be applied to the services sector - so she started up her own agency, Snook, aged 23. The Scottish business owner - one of 14 entrepreneurs on this year's list - says that she too has her mother to thank: 'She taught me from a very young age how to look people in the eye, walk with purpose and stand up for myself. It's easy to be confident when everything is going well. The hard bit is finding it again and holding on to it when things get tough.'

And things do get tough. With success comes sacrifice, and all of our cover stars admit that their personal lives have suffered. Chen works 18 to 20 hours a day (plus weekends) when she's heading a project. Thomas says her social life falls by the wayside when she's on a case: 'My family won't hear from me and my husband will get little more than a sentence out of me in a week.'

How would kids fit into that picture? Could these women continue their confident march with children hanging off their hips?

Millar says she doesn't want kids. 'I'm in huge awe of my friends who have children but it's not for me. I'm very ambitious and I like my freedom. As I've got older and my salary has gone up, the idea of having kids has become even less appealing.'

But it is possible to 'have it all', as this year's list shows. Just look at Eugenie Teasley, who started youth charity Spark+Mettle shortly after having a baby. Or our 'One to Watch' mother-of-five Erika Brodnock, whose technology business Karisma Kidz, which uses toys and digital games to teach social and emotional skills, is set to shake up the world of children's entertainment.

Drawn from all walks of business life, these are the women leading Britain out of the economic doldrums and towards growth. Onwards, ladies.