Outside a former shopping centre in the shadow of the Jumeirah Emirates hotel in Dubai, a single-storey, quick-dry concrete and glass box offers a glimpse into the future of workspace construction.

The aptly named Office of the Future (OOTF) is the "first fully functional 3D-printed building in the world", according to the Emiratis. Unlike other 3D-printed buildings, it has a permanent tenant – the 250 square-metre building is home to the Dubai Future Academy, a government-backed skills provider.

Opened three years ago by Dubai’s ruler, Sheikh Mohammed bin Rashid Al Maktoum, the OOFT is part of an ambitious strategy to ensure that 25 per cent of each new building in the UAE is 3D printed by 2030.

The technology, which is also known as additive manufacturing, uses computer control to join material together layer by layer, from the bottom up. 3D printing has been much hyped in recent years as a cheaper and more sustainable alternative to traditional methods, which is why the Dubai government says it is exploring its application across construction, healthcare and consumer products.

The OOFT’s layout is nothing revolutionary, equipped with the usual meeting rooms, flexible workspace and public cafe essential for any trendy tech firm worth its salt, but behind the scenes there are significant differences.

The Dubai Future Foundation, which developed the office with a group of multinational corporate partners, say that printing the OOFT meant labour costs – and time – were reduced by up to 50 per cent compared to buildings of a similar size. Moulded in China using a 20ft tall, 120ft long and 40ft wide printer, it took two days to assemble on site and a further three months to install services.

The building is also designed to be as efficient as possible: it’s oriented to maximise natural light, sculpted overhangs reduce the heating glare of the sun and 100 per cent LED lights come on automatically when a person enters the room at night.

Coming soon to an industrial estate near you?

Let’s not get ahead of ourselves - it’s still very much an ongoing experiment. The Foundation doesn’t know the building’s lifespan (that’s part of the trial) and it has been a challenge working out how to extend the OOFT beyond its current form. Large offices would presumably require implausibly large printers for whole-building construction, and it’s unlikely the cost will be competitive for many years, if indeed it ever is. 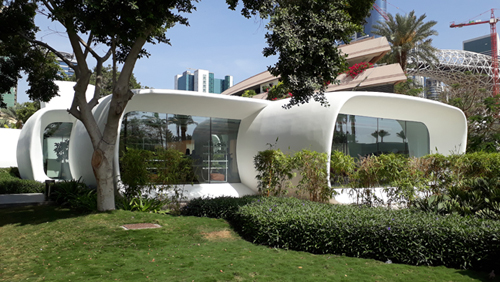 The OOFT. The greenery was presumably installed the old-fashioned way.

While we shouldn't therefore expect conventional construction to disappear any time soon, the general trend towards 3D printing is unmistakeable, even if the technology is in its infancy and its potential therefore uncertain.

Research by Deloitte shows that the growth in the global 3D printing market has more than doubled since 2014 and estimates its overall value will top $3.1bn by 2020. Indeed, Britain outlined its own national strategy in 2014, Additive Manufacturing UK, through which business, academia and state groups are collaborating to help UK industry capitalise on what it sees as an opportunity to add £3.5bn to our economy by 2025.

Whole-building and infrastructure construction may not be the most obvious part of this opportunity, but they’re worth exploring, particularly if 3D-printed buildings do indeed prove to be far quicker to build and both cheaper and more sustainable to run.

Will employees regret prioritising flexibility over a pay rise?

A recent desire for flexibility over pay could backfire as inflation starts to bite. Will...

8 hours ago
Women in Business

"It is not easy for a founder to let go of some control, ...

Being on top is possible, you just have to get started.

By Kate Magee
32 hours ago
Food for thought