What with the near-default of several European countries, nausea-inducing yo-yoing on the markets and the lurking spectre of inflation, economically speaking, last year wasn't great. So it's actually fairly surprising that, according to new figures from Experian, while the number of businesses going insolvent did rise during 2011, it was by surprisingly little.

The figures show that 21,070, or 1.1% of businesses went bust in 2011, up from 19,818, or 1.03% last year. Admittedly, that doesn't sound great - but when you compare that with 2009's rate of 1.25% of businesses - or even 2008, when it was 1.16%, you can see that considering the troubles the economy ran into last year, it's actually pretty good going. And, given that GDP figures out on Friday suggested that we're one quarter of bad growth away from another recession, that's particularly impressive.

Looking around the country, the worst areas seemed to be improving: while the figures for many regions were largely flat, the only region to see a real downward trend in insolvencies was Yorkshire, where 1,653 companies (that's 1.39%) went insolvent. Compared to last year's figure of 1,724, or 1.46%, that's not bad - although it's worth pointing out that Yorkshire remains the worst-affected area. The biggest increase in companies going bust was in Wales, where the figure rose from 1.01% in 2010 to 1.18% last year.

Worryingly, though, the property industry, where the figure rose from 0.72% in 2010 to 0.91% last year. That's not good: the sector had been enjoying a steady recovery from its woes during the recession. Although it's worth pointing out that three property companies made MT's Most Admired list this year (including Berkeley, which hit the top spot) - so the industry must be doing something right.

Just to make it all easier to visualise, here's a nice infographic: 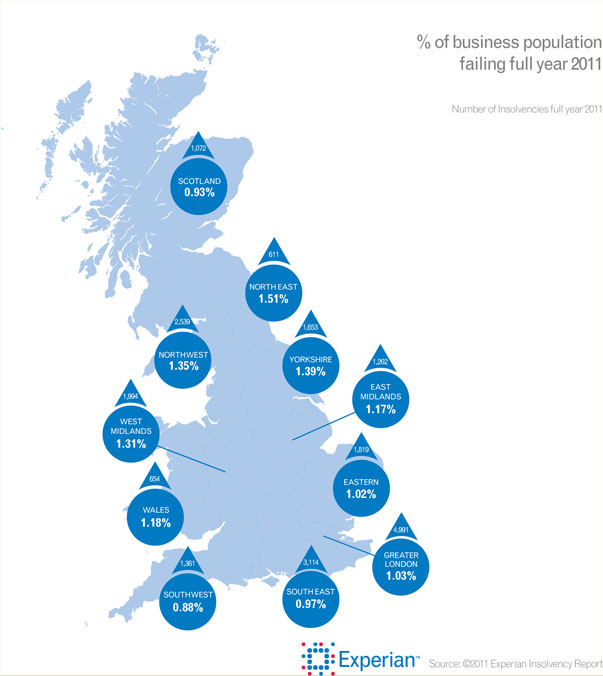