Well. The international money markets seem to like Bank of England governor Mark Carney’s forward guidance wheeze. The initial reaction may have been a drop in Sterling against the US Dollar – but the pound has now edged to a six-week high. To wit: 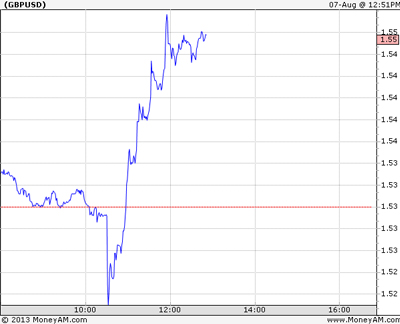 Carney’s much-anticipated forward guidance is all very ‘Bank of the People’: it’s designed to help investors and households with their day-to-day decision-making by giving an indication of whether the interest rate is likely to rise over the next few years.

In the event, Carney chose unemployment, saying the rates won’t rise from 0.5% (where they’ve been for the past 51 months) until unemployment falls below 7%, on three conditions: that low interest rates don't post a threat to financial stability, that they don't increase medium-term inflation expectations and that they don't affect the Bank's forecast that inflation will fall below 2.5% in 18 to 24 months' time.