Belinda Williams has always had a thing for natural food. Now the founder of a multi-million pound soup business, she was born on a Yorkshire farm into a family that wouldn’t be seen dead in a supermarket.

‘We made absolutely everything,’ she tells MT. ‘I often say to people the only thing my mother went out and bought was flour and sugar.’

A career in food seemed like the natural choice and after studying at Le Cordon Bleu, Williams travelled the world catering for private parties, on yachts and in chalets, before returning to Britain and opening a gastropub with her husband Terry.

After deciding to have kids the pair launched a catering business, the Yorkshire Party Company (there's a naming theme developing here isn't there?). ‘It does private parties and top end events and we’ve got three stately home venues,’ she says.

But as anyone who has worked in hospitality knows, it can be a very seasonal business. ‘We worked very hard all summer and were poor all winter, so we knew we needed to fill that void,’ says Williams.

This was back in the early noughties, when supermarkets were expanding at a ferocious rate of knots. Disappointed with the quality of a lot of own brand products, she decided to launch a range of soups under the Yorkshire Provender brand. 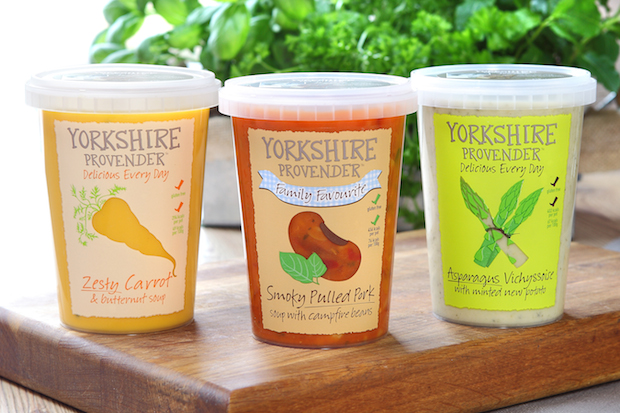 ‘Soup for me was the natural medium to share the food of producers I’d lived amongst and worked amongst, and to turn that product into a simple food that…would be exactly as it would be if you made it in your own kitchen,’ she says.

Based in Northallerton, North Yorkshire, the business has grown rapidly since launch. ‘It was really just meant to be on a small scale,’ says Williams, who spent the early days targeting high-end grocers like Harrods, Fortnum + Mason and Conran. But after landing a listing at Selfridges she started getting calls from the likes of Sainsbury’s and Waitrose.

‘You get to a point when you scale up that you have to make the decision: Do you do this really properly and go out there and give it 100%, or do you jut keep it as a cottage industry? And we decided to give it 100%.'

Yorkshire Provender’s soups are now listed in a number of Wholefoods, Tesco, Waitrose and Budgens stores, as well as on Ocado and with some regional retailers. The business expects to turn over £7.5m this year and now employs around 40 staff, most of whom work in the manufacturing of the products.

Being based in the countryside has meant recruiting that many staff isn’t easy. Williams speaks of a time she visited the London factory of Charlie Bigham, the ready meals entrepreneur.

‘He just literally makes one phone call and the next morning he’s got 350 staff,’ she says. ‘That’s not the way it works in Yorkshire.’ Instead she has to put a lot of effort into staff development and building relationships, to keep retention up. 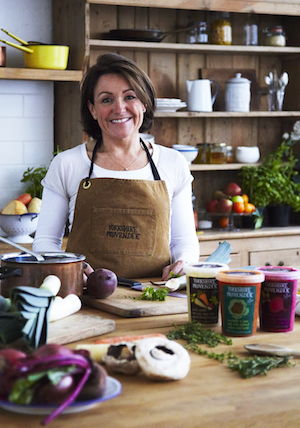 Grocers have been in the news a lot recently – both for drastically cutting prices and for allegations of mistreating suppliers. Williams says that working with the big retailers hasn’t got any more difficult in recent years though.

‘I think that generally when there’s been trouble it usually means that things become more simple because people are clearer about where the boundaries lie,' she says.

Although the business was damaged in the past when Sainsbury’s discontinued a major contract, Williams says suppliers need to understand and adapt to the motivations and strategies that supermarkets adopt.

‘Retailers are about providing the best possible value to their customer, and they can’t afford to subsidise a small, albeit passionate, producer for something that doesn’t hit the right price point,’ she says. ‘If Sainsbury’s listed every person who came and thought they had a good idea for a nice product it would be absolute flipping chaos out there.’

Many entrepreneurs struggle to get the balance right between work and family life, a problem that’s probably exacerbated by having both parents holding the fort. Williams runs the product development and marketing side of the company, while husband Terry handles manufacturing and the other technical aspects of the business.

‘If you ask my children they probably say that I work too hard, that we’ve worked too hard as a couple, and I think that particularly when they were little and growing up we didn’t have the luxury of a lot of family time.

‘But having said that I think we’ve got a charmed life. We’re extremely lucky, we live in a beautiful place and our boys have always been at home. They’ve learned the work ethic young and I think nowadays we are more able to stand back and take a bit of time.’

Besides, even the busiest folk can find a moment to heat up some soup for a quick family dinner, can't they?