Getting work in your house can be a massive headache. Aside from the costs and your kitchen or bathroom potentially being out of action for days, if things go wrong then it’s often difficult to get bad work rectified or to coax your money back from the tradesperson.

It might not be able to help with the first two problems but Checkatrade.com, the accreditation site for trades people founded by Kevin Byrne, aims to help people avoid the kinds of crooks who leave customers with a half-built extension and an exorbitant bill. 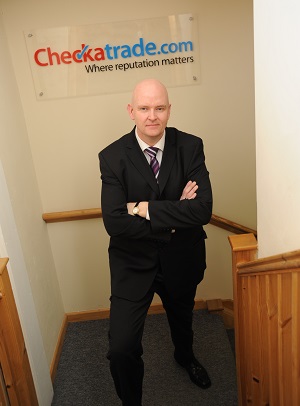 Originally launched in 1998 as a directory of vetted tradespeople, the company is now a booming online business – Byrne says it attracts almost 50,000 reviews per month, has 19,000 trade members and made around £15m in turnover in its last financial year.

That’s pretty good going for a company born out of a natural disaster (albeit a mild one). Byrne came up with the idea after a localised hurricane hit Selsey, the town where he lives, in 1998, causing £10m worth of damage.

‘It was being reported on national news, ITV, BBC and then over the next 48 hours there were hundreds of white vans appearing in Selsey,’ he tells MT. ‘And those who were victims of the weather were now being the victims of rogue traders.’

So Byrne, who was working as a self-employed carpet cleaner at the time, set out to find a way to keep the cowboys in check. He soon came up with Scout, a directory of tradespeople whose qualifications, insurance and testimonials he had personally checked. Though he had initial success getting friends and acquaintances signed up, further expansion was a tough task.

‘People often use the phrase, "It nearly killed me" as something that just rolls of the tongue, but it really did,’ he says. ‘It was incredibly difficult, and it took many, many, many years of my wife saying to me, "are you gonna get a proper job Kev, when can this family have a holiday, why are we living from hand-to-mouth consistently?"

'My friends were saying to me after 7 or 8 years of trying to get this off the ground, "Kev this is killing you, why are you flogging a dead horse?'"

But he was undeterred. The rise of consumer internet use provided a new way for the business to collect reviews and attract new clients and things ‘started to take off.’ At the time, Checkatrade.com was really cutting edge as the likes of TripAdvisor and Yelp had yet to find success.

Every company that signs up to the service is ‘thoroughly vetted’, says Byrne, including a face-to-face interview and a paperwork check. Checkatrade then goes through their order book and contacts up to 10 recent customers to check they are happy with the work and asks the tradesperson to seek reviews from five more customers before they go live on the website.

Checkatrade makes its money by charging members fees of around £600+ per year. That obviously has the potential to create something of a tension in the business model – its paying customers are unlikely to want to return if they get poor reviews. So it's perhaps little wonder that most of those listed on its website seem to be rated 9/10 or higher.

That has raised some eyebrows, but Byrne insists his focus is on ensuring his members are up to scratch. ‘Checkatrade will live or die on the standard of the traders we have on board,’ he says. ‘If we’ve got great trades where the customers have great confidence in using them, it will continue to grow. If we lose the consumer confidence, it’s on its way out.’

Recently the firm, which now employs around 230 people, has been busy notching up votes of confidence in the form of partnerships with county councils' trading standards departments, including Suffolk, Kent, Surrey, Buckinghamshire and Nottinghamshire, where it has just opened its third office.

Byrne will certainly need to have confidence in the quality of his membership if his plans for the next phase of the company’s development are to pay off. Within a couple of years he wants Checkatrade to be able to guarantee all of the work done by tradespeople arranged through its website. ‘It’s a huge, massive gamble for us, and it’s a massive, massive commitment, but the message coming will be if the job goes wrong, we’ll put it right’ he says.

As well as growing by around 35% in topline terms, Checkatrade is also making a tidy profit of around 8%. ‘I know this is a business interview so [this] might sound a bit strange, but profits are not on our mind, it's not on our agenda,’ he says. ‘We are always ploughing as much back into the systems as we possibly can to try to make the reviews more robust, to make sure that our vetting procedure is as robust as could be.’

Byrne says he feels successful but he’s not quite living the glamorous footloose and fancy-free lifestyle of a self-made multimillionaire just yet, as his wealth is still tied up in the business (which he has had valued at £55m). But his lot has improved substantially since the early days.

‘In the last seven or eight years we have grown substantially,’ he says. ‘If I was living hand-to-mouth with a £15m turnover that would be pretty sad wouldn't it?’