The last time recruitment boss James Reed spoke to Management Today was in 1996. ‘Will on-line recruitment take off, or is it just a gimmick?’ Asked the article. The then chief operations officer of Reed Personnel Services (now called simply REED) had just set up a website – a first for a British recruitment company.

‘As a kid I remember queuing up in banks with my mum and being bored stiff. I was so excited when the machine in the wall arrived, which meant you could get your money without waiting around,’ reflects Reed, now chairman of the family business founded by his father in 1960.

‘When I heard about the internet, I could see immediately that this was a way people could look for jobs in their own time, whenever they wanted, wherever they wanted.’

At the time, looking for work involved getting the daily papers (awkward if you wanted a job in a different city) and signing up to local agencies, often a laborious task. Reed thought the internet had the potential to revolutionise the experience, anticipating ‘maybe 40-60% of candidates’ would eventually come via that route. Now, of course, they all do, in huge numbers – there were 199 million visits to Reed’s sites last year.

(Not everyone was convinced, it should be noted. ‘Reed have had to change their page once already,’ a rival complained in the ‘96 article. ‘It took such a long time to download.’)

Appropriately enough for the scion of a recruitment dynasty, Reed has had an extremely varied career himself, starting out as a grave digger, or more accurately ‘cemetery worker’, in between St Pauls and PPE at Oxford, before sending a speculative application to Gordon and Anita Roddick at the Body Shop.

It worked, and it’s a route he recommends to people to this day, especially if you apply by letter, rather than by email. Reed credits the Roddicks with teaching him the importance of values in business, and also attention to detail. ‘Anita would come into the shop and blast us if the Jojoba oil wasn’t presented properly. The till had to be precisely on when you counted it up each day, otherwise you stayed and did it again.’ 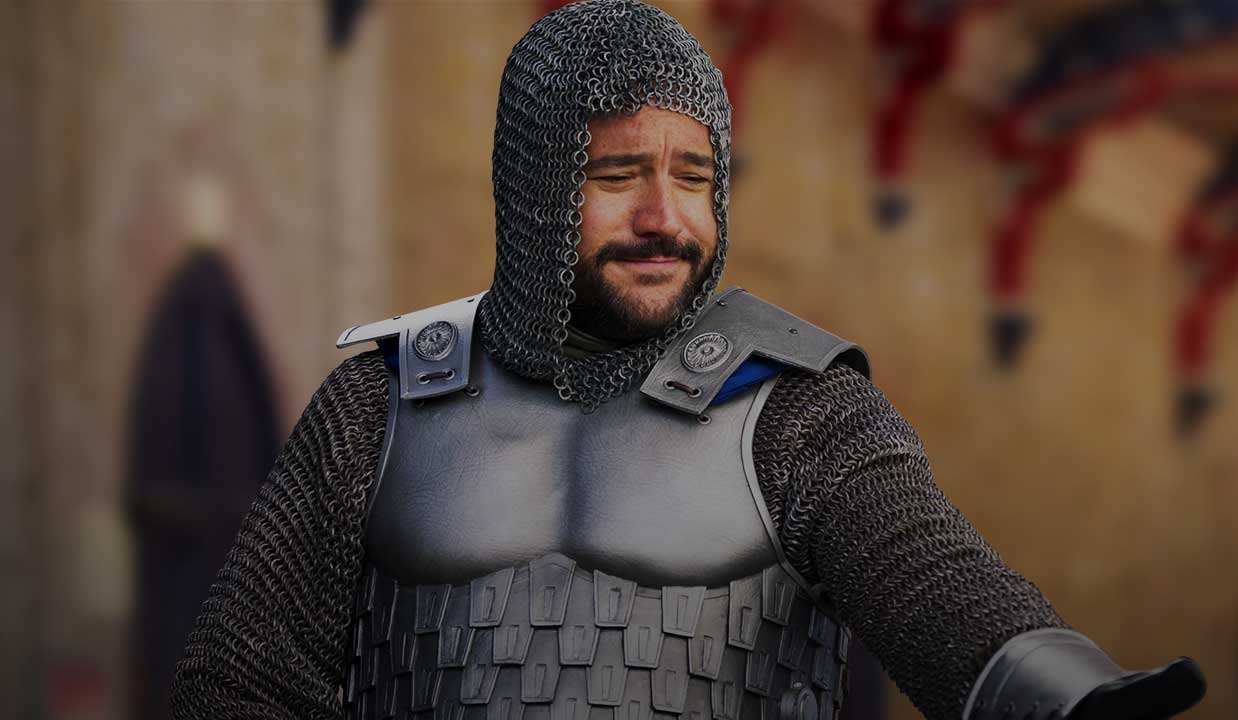 James Reed does not look like this (see main image above). Nor has he ever been a knight...

At that time in his life, joining the family firm was a possibility but not a foregone conclusion and neither of his two siblings are in the business today. In fact, it wasn’t until he was 30 years old that Reed eventually did join.

He credits his range of experiences in between with giving him credibility and a bit of confidence. They included a stint at Saatchi and Saatchi, a job as a BBC producer and some time as an aid worker, during which he walked across the border into Afghanistan during the Soviet invasion.

‘I was taking some money to a village that had been bombed and was suffering a malaria outbreak. The stakes were pretty high. I was the only person who had any money, and the only person who didn’t have a gun. There was a war going on – they would have killed or captured me, which would have been most unpleasant.

‘I’m glad my mum didn’t know about it, and I wouldn’t want my own children to do it, but it’s an experience I’ll never forget. It’s made me a lot less afraid of things,’ Reed says.

This didn’t mean life in the family business would be a walk in the park, however. Though Reed admits he benefitted from good timing when he joined, as the UK was just coming out of the early 90s recession, he found himself faced with a great deal of expectation.

‘If your name is above the door, how you behave is important. To be honest, you have to work harder than everyone else,’ he says.

Now, two decades after rising to the top spot at the family firm with its newfangled website, Reed is busy looking for the next wave of changes that will affect his industry, especially machine learning.

‘Brexit will have a profound effect on the labour market, but technology will have an even more profound effect. We’re seeing skills shortages in a variety of sectors, and there’ll be a whole lot of new jobs we haven’t even invented yet, which creates a growing pressure to educate and train people in new ways. With machine learning, it’s possible education can be much faster to see what skills employers are looking for, and where are the gaps we need to fill,’ he says.

1. Cash is the oxygen of business. ‘I like to know every morning how much cash we’ve got, and every evening. I do that because I know I’ve got to pay a lot of people at the end of each week, and I’ve never missed a payroll.’

2. Trust everyone and no one. ‘I give everyone the benefit of the doubt when they come in as a supplier or colleague, but I think it’s really important to have checks in place where you’re testing that. I’ve had people in the past who I’ve found stealing from us, for instance.’

Read more: How edtech will help you survive the gig economy