Compared with a decade or so ago, it's tempting to think that the battle over flexible working has been won. These days no one bats an eyelid if you need to work from the coffee shop, or from home, occasionally. Even the stigma of 'reduced hours, reduced commitment' that used to hang around those who opt to work properly part-time is dispersing fast.

Tempting, but wrong - there is still at least one group on the bleeding edge of flexible working who are pretty hard to find, especially at a senior level - the job-sharers. Perhaps it's the thought of having two people to manage instead of one, the extra cost of allowing for handover time and duplicated benefits, or worries about where and with whom the buck stops. For whatever reason, job-sharing top execs remain a great rarity.

That, says Karen Mattinson, founder of flexible recruitment specialist Timewise, is a mistake, because the model has a lot to offer. 'We're in a world of really complicated jobs requiring diverse skills you are unlikely to find in one person. You shouldn't get hung up on how many days each person does, or the cost: 1.2 times the cost doesn't matter if you are getting 1.5 times the output. It's about designing jobs for maximum business impact.' Timewise produces the Power Part Time 50 precisely to showcase high- flying part-time execs, and this year's list features a record nine job-shares (see the full list at managementtoday.com).

However not everyone in the big cheese recruitment business is quite so convinced. There are legitimate concerns which become more acute the more senior the role involved, says Jim Hinds, managing director for Europe at top headhunter Russell Reynolds. 'I don't think job-sharing will be part of the future way of working at the very top level, because there is too much complexity over accountability. The people who work at this very top level tend to be extremely confident and competitive. They want all the credit and all the accountability too, they don't want to share.'

MT columnist (and former job-sharer) Rebecca Alexander of The Coaching Studio disagrees. 'Job-sharers on the board are like women on the board - it's 2017 and they ought to be there. I have lost count of the number of my clients who say they haven't gone for a top job because they look at the board and there is no one on it whose life they want to have. Job-sharers broaden the appeal, and the talent pool.'

For those reasons, as well as for the simple fact that for many it's just the best way to work, the power of the pair only looks set to increase.

MT tracked down some of the UK's most senior job-sharers to find out how they make it work and we'll be revealing all this week. First up are Charlotte Cherry and Alix Ainsley, who are the HR director, group operations at Lloyds Banking Group.

It's one thing to persuade your boss that two people whose track records they already know can work together as a single unit, but quite another to convince a brand new employer to take the same risk.

Nevertheless, Bristol-based HR execs Charlotte Cherry (pictured, left) and Alix Ainsley (right) decided to have a go at getting themselves hired as a package deal. After a year or two of job-sharing in their old company, it soon became apparent that moving up the ladder where they were was going to be challenging. 'We were overdue a bigger job, and there was definitely a sense that if we wanted the progression then maybe the time had come to dissolve the job-share. But neither of us wanted to do that,' says Cherry.

Confident that their job-sharing experience would make them attractive to the right organisation, they set about finding themselves not only a new job but a new employer too. 'The reaction from headhunters was, "Why are you even trying to do this? Forget it." That definitely made us more determined. The advantage of a job-share is that you egg each other on. You might give up on your own but you become more dogged in a pair,' says Ainsley. 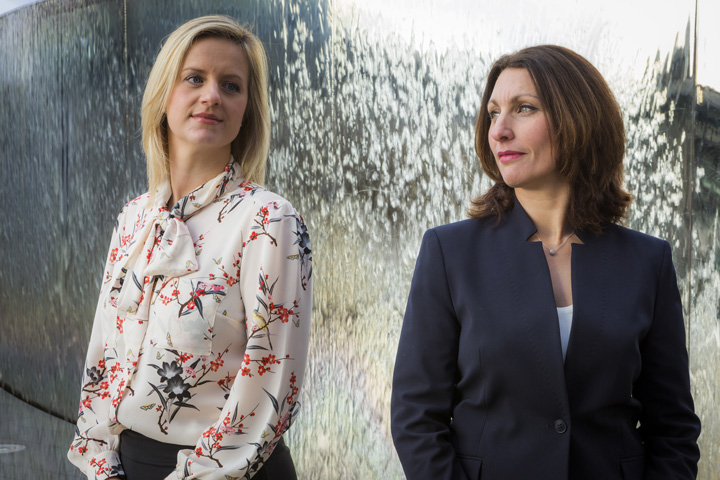 Finding the right organisation, and also the right boss, is crucial, says Cherry. 'The single biggest influence in us coming to Lloyds was the person that hired us. He was far more open to the idea of bringing in an external job-share pair than anyone else we had come across.'

The move was completed in January 2016, they have a team of 30 and are only one rung down from the ExCo, making them Lloyds' most senior external job-share hire ever. 'At GE (their old employer), we were known quantities. Here we are starting again and having to prove that our job-share really works.

'You have to be invested in the success of the job-share, and actually be quite selfless,' says Cherry. 'You can't have a situation where Alix made a decision on Friday and I'm trying to undo it on Monday.'

And although jobs-shares are generally more expensive - 1.2 times full-time equivalent is typical - the upsides to the employer of effectively having a relay composed of two sprints instead of a week-long middle-distance run more than compensate. 'Two heads are better than one, and in a big and demanding job like this, the levels of energy you can sustain are pretty phenomenal when there are two of you. It's the "Two Mondays" effect,' says Ainsley.

One of their biggest challenges when they first started was really switching off when not at work. 'I'd be online on a Thursday thinking I was being helpful, and Alix would be going, "Charlotte, I've already dealt with that."'

They both started job-sharing in order to achieve a better work/life blend, but the benefits have been professional as well as personal, says Ainsley. 'It is a very healthy way to work, it's taken me much further than I anticipated. I think about where I am, in this incredible job in this incredible company. I would never have got there on my own.'

Part 2: Find out how The Guardian's political editors hold down one of the toughest roles in journalism.

Part 3: Hear from two senior civil servants who share a role at the Department for International Trade.

The leadership lessons from elite sport

"I refuse to feel shame for the failure of my business"

Chris Hirst: What leaders can learn from a real-life Top Gun

42 hours ago
Women in Business