One minute John Lewis is booting a mother with a misbehaving toddler out of a store around Mother’s Day no less, the next it’s cutting staff bonuses for the third year on the trot. Surely the fluffy favourite isn’t developing a hard edge?

Unfortunately, John Lewis is doing what most have to do in the face of tough high street conditions. The bonus awarded to John Lewis and Waitrose staff has fallen to 10% of salary, so around five weeks’ pay. Last year it was 11%, in 2014 it was 15% and 17% in 2013. You can see a pattern forming here and it’s not going in the direction its 'partners' would want. Of course, bonuses remain fairly scarce for those outside of finance, so employees don't have too much to complain about.

John Lewis' history of bonuses - as a percentage of salary 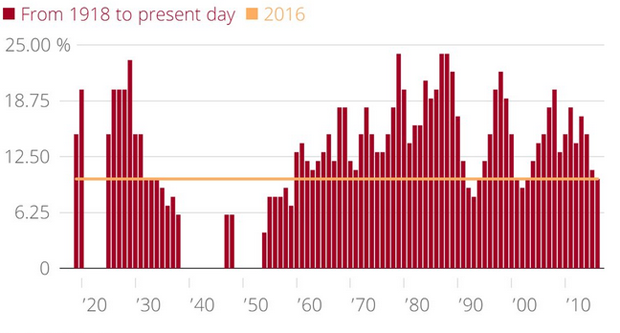 The partnership had better news with its annual profits – up 24% to £435m. But pesky pension charges created an extra headache. The retailer said its main measure of profitability would have been up 7% during the year to 30 January, had it not been for the higher pension charges. Profit before tax and exceptional items fell 10.9% to £305.5m.

Waitrose reported an operating profit of £232.6m, down 2% on last year though John Lewis said this would be up 2.5% if property considerations were excluded. Improved productivity, cost-cutting and improvements in their supply chain paid off in part. There was still a 1.3% dip in sales at Waitrose, though John Lewis’ flagship store brand offset that with 3.1% growth.

The company is expected to cut costs this year to cope with what has become an increasingly tricky trading environment. Yes, even the mighty John Lewis has suffered against the backdrop of supermarket price cuts and ongoing price deflation.

But some of the measures it’s reportedly rolling out may not do its sparkling reputation a world of good. There have been murmurings about plans to shut staff canteens and the introduction of longer shifts for hundreds of delivery drivers. Effective for cost-cutting, not such a winning move for employees. A driver has already been chattering away to The Guardian about how rota changes would reduce the potential for earning overtime pay – important as some drivers are paid close to the minimum wage.

Nobody would bat an eyelid if the likes of Tesco or Aldi enforced some of these changes – but then the public doesn't hold other retailers in such high regard or weigh them down with such unrealistic expectations. Really, there's no risk of John Lewis becoming an Amazon-like employer anytime soon.