Now the manic Christmas period is over, it's time for retailers to look back, take stock and reflect on whether they've made a decent job of it. This year MT expects that many will find a pattern not seen before, as John Lewis discovered.

Buoyed by its ubiquitous Monty the Penguin adverts John Lewis enjoyed a bumper Christmas period overall, with sales in the five weeks to December 27th up 5.8% on last year to £777m. Yet in the week of Christmas itself, typically the biggest of the year, itself things weren't so rosy – sales actually declined by 1.4%.

‘This year confirmed the new shape of trade for Christmas, with an early peak at the end of November driven by Black Friday and last minute gift buying,' said John Lewis MD and MT's Britain's Most Admired Leader, Andy Street. The knock-on effect of this on Christmas sales was widely predicted by naysayers who said Black Friday would bring forward spending that would otherwise have occurred anyway.

Today Street warned that a focusing of Christmas spending during that week could be detrimental to the industry as it put pressure on fulfilment and hit profits. 'We've got to ask if it's right to concentrate trade so much in that one period,' he told the BBC. 'My personal hope is that this is the high water mark for Black Friday. I don't think we can put the genie back in the bottle but do we need to stoke that fire anymore? I personally hope not.' 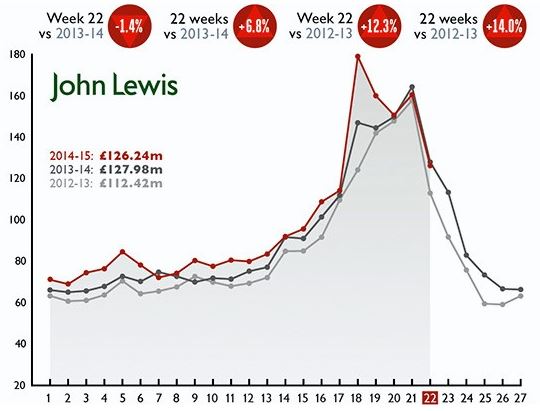 In the case of John Lewis this doesn't seem to have been a big problem – 5.8% growth over the whole period (4.8% like-for-like) seems pretty solid. But as more Christmas results from retailers trickle in over the next couple of months, MT expects some will have been less able to adapt to this changing pattern.