‘Julie Deane, Mum and trendsetter’. The tagline for the Google Chrome advert charting the rise of The Cambridge Satchel Company, from Deane’s kitchen table to the arms of celebrities and fashion bloggers worldwide (with a little help from Google, of course), is warm and fuzzy, like the video.

Deane’s children were her motivation to start the business with her mother back in 2008. The former accountant had just £600 and six weeks during the summer holidays to make enough money to move her eight-year-old daughter away from bullies to a private school.

But while Deane is all motherly smiles and long, beaded necklaces in real life – hugging the staff at her Spitalfields shop and shaking my hand warmly – her success is no happy accident. Deane is a focused businesswoman.

The Cambridge Satchel Company has just secured $21m (£12.7m) of funding from Index Ventures, the venture capitalists backing online fashion retailers Asos, Net-a-Porter and Nasty Gal, as well as tech companies like SoundCloud and Dropbox. It is the company’s first funding round (they’ve never taken on any debt either), although Deane is tight-lipped about how much equity Index have bought.

The decision to give away a slice of the company wasn't easy, says Deane, but came after two years of careful thought. ‘It did take a long time for me to convince myself that I’d found someone who could do exactly what I felt was necessary for this brand,’ Deane says.

‘It’s like having a stepfather come in. You’ve vetted him so well that you know he’ll be kind to your child.’

With Index on board, Deane can now push ahead with her plans to turn Cambridge Satchel Company into a ‘global brand’ (although it already sells to more than 120 countries). Turnover in the year to the end of June last year was £13m, and Deane hopes to at least double that in the next 12 months.

‘In five years' time, I would be disappointed if we weren’t around the £70-80m turnover mark. There’s no reason why we can’t be,’ she says confidently.

Cambridge Satchel Company is recruiting more people to join what Deane describes as a ‘lean senior management team’ and take over areas such as marketing and technology. She also has plans to upgrade the company’s website, so it ‘reflects the brand, rather than just e-commerce’, and invest in upping production at their Leicestershire factory.

Deane, who lived near Chicago for five years with her American husband, is considering opening the company's fourth store in New York (and planning to meet J Crew’s chief exec Mickey Drexler to ‘pick his brains’), rather than adding to the three in the UK. ‘That’s a market I understand, through my husband, although he might not think I understand him particularly well after 20-odd years,’ she laughs.

Deane’s family are the constant thread that runs through her business. Her Mum Freda Thomas is still involved in the company and, with Deane, owns the majority. ‘My Mum has the best common sense ever, and that can never be underrated,’ Deane says. ‘There’s nobody I would trust more than my Mum. We didn’t get paid for two years – who else are you going to call upon?’

Moving her daughter Emily and son Max, now 14 and 12, to private school has been ‘completely worth it’ Deane says. However, seeing Cambridge Satchels grow from nothing to a company with more than 100 employees has been ‘just as beneficial’ for them.

‘Nothing seems inaccessible to them,’ she says. ‘They’ve seen something incredible happen just because someone was focused and determined and kept on trying.’

Deane, who studied natural sciences at Gonville & Caius college, Cambridge (where she later headed up their development team), before working as an accountant in her native Swansea, would like both her children to follow her into business.

‘They’re both like me – they’re both quite awkward, so I don’t know who else they’d work for,’ she laughs. Her son is happy to talk to journalists, whereas her daughter is ‘very diligent’ but doesn’t like the publicity side of the business.

Deane proudly cites the time her daughter once set up an illicit sweet shop in her room on a school trip when she was 10.

‘The headmaster said to me, "I had to shut it down, because I can’t condone that kind of thing, but I asked her, ‘What profit did you make?’ And she said, "Net or gross?" I thought: that’s my daughter!’

Deane is also keen to point out that her experience of starting a business after being a stay-at-home mother for eight years shows women ‘who are lucky enough to have that decision to make’ shouldn’t feel afraid of stepping out of the workplace for a while (in contrast with Sheryl Sandberg’s exhortation for women to ‘lean in’). 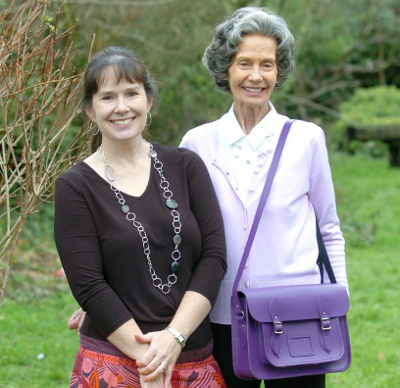 Deane and her Mum, Freda Thomas

She is very much an advocate of doing it yourself, emphasising that she has never looked to the government ‘for a handout’. Deane says she actually avoided the numerous government agencies when starting out as ‘it was so unclear what each one of them did’ (something the Federation of Small Businesses echoed earlier this week).

However, Deane is effusive in her praise for David Cameron’s decision to include her and other small business bosses on the trade delegation to China last year, a market where she sees potential for ‘enormous growth’ (a limited edition Year of the Horse satchel is currently front and centre of Cambridge Satchel’s website for the Chinese New Year today).

‘That was a fantastic opportunity,’ Deane says. ‘Suddenly a market that we didn’t intend on going into has become accessible.’

While she looks east for expansion, Deane is adamant that her satchels will stay ‘Made in Britain’. Manufacturing the bags elsewhere ‘was never an option’, she tells me, even when Cambridge Satchels’ main factory stole their designs to launch a brand called Zatchels.

Deane launched a High Court action, which was settled out of court, and pulled out of the factory even though they had tens of thousands of unfulfilled orders. ‘A 32,000 bag backlog feels to me like the ultimate test. I hope it never gets worse than that,’ she says.

Having looked over the brink, Deane is very aware of her company’s success. After the Google ad massively widened their exposure, the search giant’s top people were high on the list of people she wanted to tell about the Index investment before it hit the press. Deane messaged Google’s head of PR, who casually told chairman Eric Schmidt as they schmoozed at Davos and Google’s UK head said the news had made his day (while at the Prince’s Trust dinner), something she says she can’t quite believe.

Deane is committed to keeping her company grounded and her bags relatively affordable (the 11’ ‘Classic’ sells on their site for £99). I tell her I saw a woman with a Cambridge Satchel on the tube on my way to interview her, and she is delighted.

‘I love seeing the bags out and about. When you see people like Alexa Chung, Elle Fanning or Sophie Ellis-Bextor carrying one of our bags, for people to be able to have that same bag, and ask for it for their birthday or Christmas – I think that’s lovely.’