Just Eat’s management team are likely indulging in a round of ‘mini fist pumps’ this morning. Fifteen months after debuting on the stock market, the takeaway ordering company shows no sign of slowing down.

That rapid expansion is partly thanks to Just Eat’s growth in overseas markets. Though it was initially conceived and launched in Denmark, the company is now headquartered in the UK, which still accounts for 71% of its revenues. In a bid to reduce its reliance on Britain’s appetite for food, it has been growing the number of countries it operates in rapidly.

In the last six months alone it has acquired Australasian outfit Menulog, giving it a presence in Australia and New Zealand, and Mexican market leader SinDelantal, along with two Italian and one Canadian competitor. 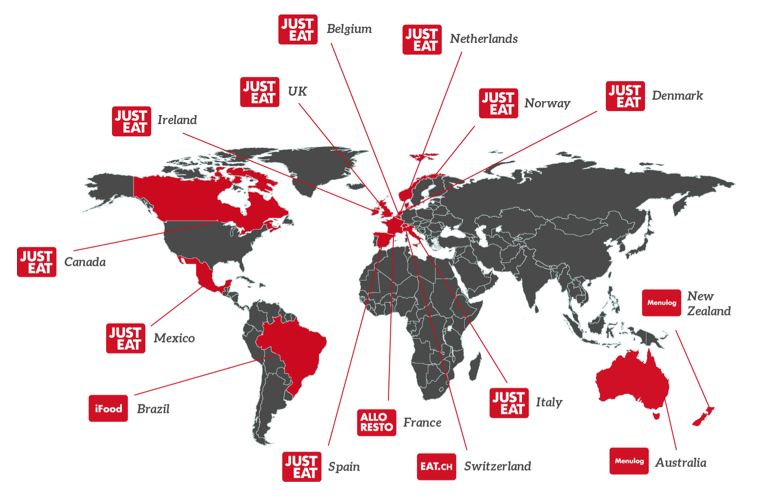 Just Eat now has a presence on four continents

Not every country will roll over for Just Eat though. Its two fiercest rivals, America’s GrubHub and Germany’s Delivery Hero (which owns Britain’s Hungryhouse) are both extremely strong in their home markets, and the former has shown a clear appetite for global domination too.

Just Eat's rapid global expansion is a sign that the cash generating power of a stock market float is still a valuable option for fast-growing companies looking to go global. It also draws favourable comparisons with Uber, whose own lightning-quick expansion was funded by the deep pockets of Silicon Vallley and Wall Street.

But on the home front it also faces competition from the more luxurious end of the market, as fast-growing Deliveroo makes it easier for people to order food from restaurants that didn’t used to offer delivery (including one with a Michelin Star) Chains like Domino’s Pizza and Hotcha, that have their own online ordering services are also a threat.

There’s still plenty of room for growth though. Despite ubiquity of the internet, Just Eat reckons that 70% of takeaway orders are still made over the phone. Orders in the UK were still up a remarkable 49% in the period, so Just Eat looks set to claim a decent share of that 70% as more of it shifts to online.

Nonetheless, if it wants to reduce its reliance on Britain it will need to keep entering new countries - and perhaps even take a leap into Germany and the US.