MT spent yesterday morning in Shoreditch (where else?) getting to grips with some of the new bits of technology that Just Eat, the UK-based takeaway company, says is set to change its market.

The FTSE 250 firm, one of the stand out successes of Britain’s start-up scene (even if it was originally launched in Denmark) is still growing at a tremendous pace and is a world leader in its field - making it easier to order a lamb bhuna without rifling through the kitchen draws looking through a menu, remembering to have enough cash handy or having to face the ordeal of speaking to somebody on the phone. Its shares dipped after its latest market update because of slowing orders in its home market, but they were still up by 34% overall – the kind of growth most large businesses can only dream of.

But like every company it faces competition from younger upstarts, notably the likes of Deliveroo and Ubereats, which are going after a more premium end of the market. Just Eat’s bosses like to play down the comparisons, arguing there is plenty of market space for all of them to grow into (and they’re right – most people still order takeaways using the old fashion method). But nonetheless the company seems acutely aware of the dangers of standing still and is keen to stay at the cutting edge of technology.

The innovations on show at its event ranged from the mundane – a new app to let customers order food via their Xbox – to the more fanciful ‘moonshots’ – including its new ground-based autonomous delivery drone. Some of it will catch on and some of it probably won’t, but it makes sense for a business that has transformed its industry to keep an eye on what’s coming down the road to avoid being disrupted itself.

‘There is no way that in 5 or 10 years time that the current usage of food delivery services by customers in our markets will be as it is today,’ said its chief executive David Buttress. ‘We’re all busier, we all want more choice and if we can use technology to make it more frictionless for people to use food delivery and at the same time underpin that with an even better choice of great local restaurants, it’s inconceivable to us that the industry won’t continue to grow very, very quickly in the long term.’

Half way through a game of Call of Duty and hungry but can’t be bothered to fish around for your phone? Soon gamers will be able to order a number 27 Banquet for One via Just Eat’s app for Xbox One. It’s hardly revolutionary but sure to be a hit with couch potatoes. The company has also developed a new app for Apple TV that lets multiple people order from their phones at the same time. A running total is displayed on the screen so you can keep track of who is ordering what and you can choose whether to split the bill or go Dutch. There are also two new ‘chatbots’ in the works, one for Facebook messenger that will recommend new dishes based on a customer’s preferences and another for customer service.

If the likes of Microsoft, Facebook, Google and HTC are to be believed we could all soon be the proud owners of augmented or virtual reality headsets that help us play games, communicate and visualise information in a more ‘immersive’ 3D manner.

So you like sushi but don’t know your hosomakis from your nigiris? Just Eat has developed software for Microsoft’s AR hololens that it hopes consumers will use to get a 3D preview of what the food they plan to order will look like. It seems a bit frivolous right now but it’s not that hard to imagine consumers in a future where this kind of technology is taken for granted demanding just such a service. 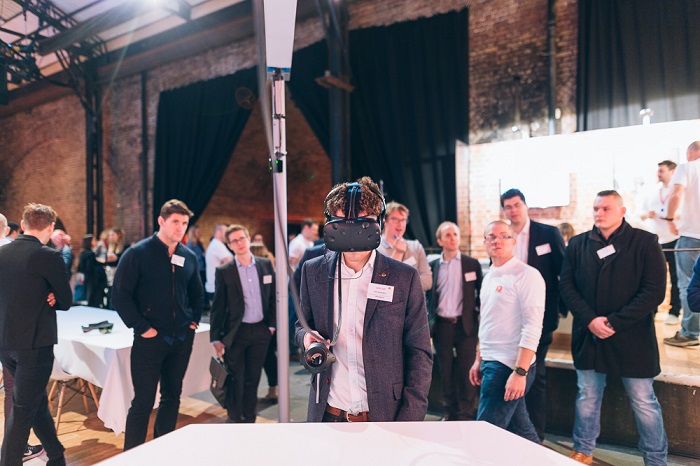 The same is true of the company’s new VR software, which is aimed at its restaurant partners rather than the end consumer. By popping on a headset takeaway owners can see a 3D representation of the area they serve and model how they might expand – for instance how recruiting a couple of extra drivers might help them deliver to a larger radius. This struck MT as perhaps the least useful of the tech on show, but Just Eat suggests it would help restaurateurs who struggle to understand all their data using just spreadsheets and 2D maps.

This one’s been doing the rounds for some time now. While Amazon wants to ship its products with flying robots, Just Eat is experimenting with automated, ground-based buggies that will trundle from a takeaway to your front door with a bag of food in the back. Developed by Skype developer Ahti Heinla’s Starship Technologies, the drones are currently being tested in Greenwich, can mount and dismount pavements and are unlocked by a customer’s smartphone once they reach the front door. 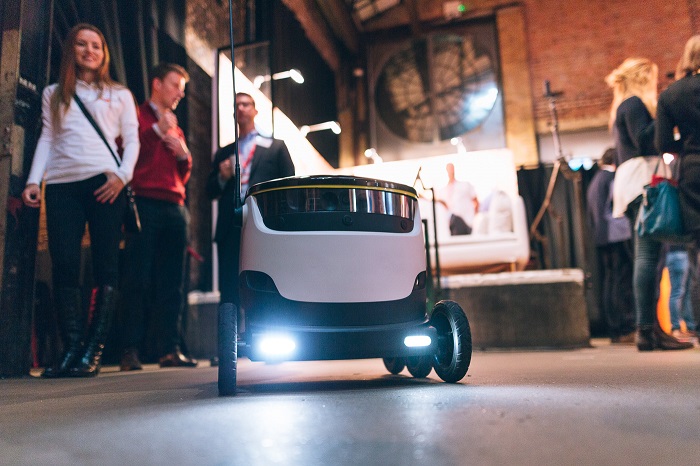 At the moment they are piloted by somebody with a controller but the idea is that in the future they will be able to navigate by themselves. The technology is about there, but the challenge will be in getting approval from councils, who are unlikely to want swarms of robots to take over their streets. These seem unlikely to become the norm any time soon, and Just Eat’s CMO Barnaby Dawe says they aren’t trying to do away with delivery drivers altogether. But having experience in using this kind of technology could come in handy should consumer and political appetite for such services intensify.

5 minutes with… Rachel Cook, managing director at digital design agency Thompson, who rose through the ranks from office manager to MD after a less-than-ideal MBO

Want to boost employee satisfaction within your organisation? Get more women onto the board of directors

Opinion: Dictating what your workers wear is a great way to tell them not to be their authentic selves.