Ambitious women should help bring about change by refusing to work for businesses that don’t have women on their board. That’s the verdict of Kathryn Parsons, co-founder of the coding education business Decoded.

Parsons was speaking on a panel last night at MT’s 35 Women Under 35 2015 party, held in association with Accenture, alongside LoveHomeSwap founder Debbie Wosskow and Emma McGuigan, the MD of Accenture’s UK technology division. While the boards of Britain’s biggest businesses are slowly becoming less dominated by men, women remain far from equally represented, especially among the FTSE 250 and in private limited companies. 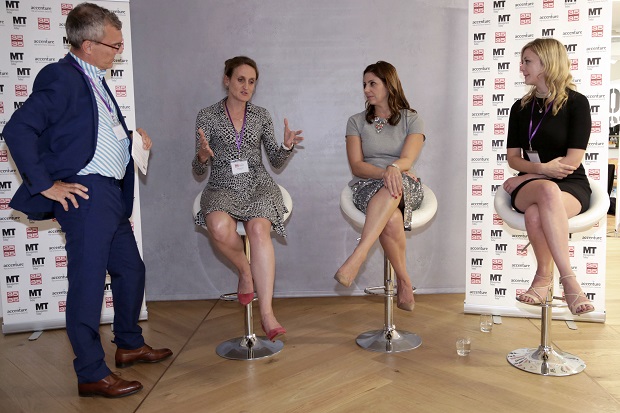 ‘If I could give a rallying cry out there to all incredible women out there it would be vote with your employment,’ said Parsons, who appeared on MT’s 35 Women Under 35 list in 2013. ‘Your job is a vote, and choosing which company to work for is akin to voting.

‘What are they committing to in terms of how they treat the women within their business? Simply don’t join companies that don’t put women on their boards, because it means that they don’t take you seriously and it means they don't think that there is a woman in the world who is good enough to be on their board.’

Wosskow, a member of the first 35 Women Under 35, published back in 2001, said she backed quotas to boost representation of women on boards. ‘The challenge often when you’ve got a female chief exec is everyone thinks they’ve got that box ticked,’ she said.

The panel also discussed how to boost the number of women pursuing careers in STEM (science, technology, engineering and mathematics) sectors. McGuigan said that role models were important.

‘By the time girls are old enough to actually think about what they might like doing, they’ve already been very influenced and they don’t have rolemodels – they don’t have mothers or aunties or grannies who have worked in a science or tech background so they end up falling into the same cycle,’ she said.

Wosskow and Parsons, who both studied non-STEM subjects at university, agreed there was a need to challenge the perception that studying science was the only way into a scientific career. ‘Many of the digital businesses thriving in London are fantastic, disruptive businesses,’ said Wosskow.

‘I don’t think we should thrust engineering and maths down people’s throats – what we need to make them understand is that digital is not intimidating, it’s not scary and in fact I would argue that you don’t need a science degree to imagine, to run and to scale a business.’

Interested in more debates like this? Join us in London on November 19 for our Inspiring Women conference. Find out more and book tickets here.

Watch the behind the scenes video of the 35 Women Under 35 cover shoot here:

Want your people to bring their whole selves to work? You first.