An artistic impression of what a converted garage will look like

Boris Johnson’s latest bright idea is not dangling like a fluffy potato on a zip wire but converting outer London’s disused garages into space for start-ups.

The capital’s mayor has earmarked an extra £9m for regenerating high streets and town centres in outer London. Under the plan, housing associations and boroughs will be able to bid for cash to do up empty garages for the first time.

Even without conversions, budding entrepreneurs shouldn’t dismiss the idea of working alongside dust and engine oil out of hand – they’ll be in exalted company: Apple, Google, Microsoft and HP all started out of garages (although it’s decidedly warmer on the west coast of the US).

‘London is littered with empty garages that with a little bit of love and investment could provide the perfect working space for small businesses,’ BoJo said.

There are 3,275 empty garages owned by housing associations in London, over a third of which are in the south east borough of Bexley, according to a report by Greater London Authority Conservatives planning spokesman Steve O’Connell.

Housing association L&Q, which has 1,293 empty London garages, estimated turning a garage into a wired-in, warm space would cost around £26,000. If the unit was then rented out at £60 per week a housing association would make their money back in about eight years, the report said.

To put that in context, a teeny 226 square foot space in Clerkenwell, just north of the City, would set a small business back £1,590 per month. Wannabe start-ups may want to set aside their dreams of a Silicon Roundabout office and head out to Bromley. At least they can sing along to Weezer… 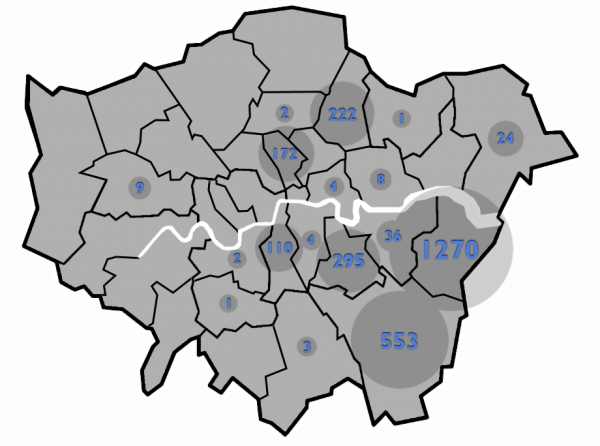