‘Transformational’ is one of those buzzwords business leaders love to label themselves with, but only 8% are actually suited to successfully turning an organisation on its head, according to new research commissioned by PwC.

‘Psychometric specialists’ Harthill Consulting profiled 6,000 ‘leaders,’ putting them into one of six categories of how people lead during change and comparing it to data from a decade ago. 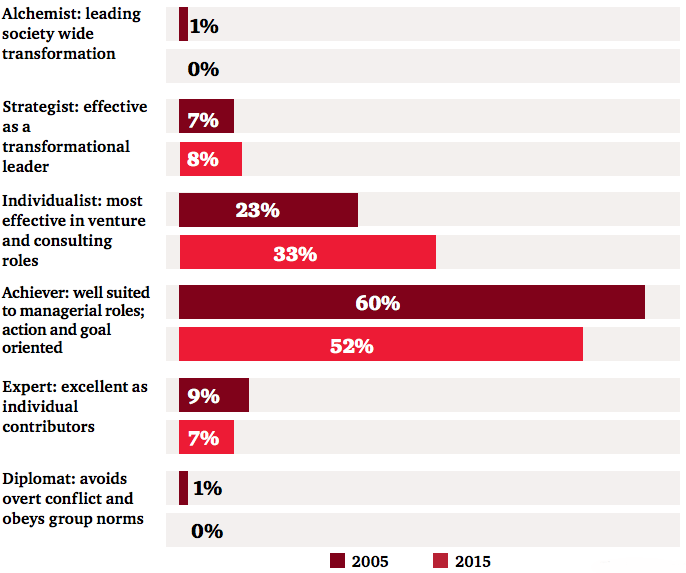 It concluded only 8% of leaders they profiled was a so-called ‘Strategist’, with skills such as seeing things from multiple perspectives, using power ‘creatively’ and leading with passion, detachment, vulnerability and courage (no wonder they’re so rare). Companies looking for someone to lead a turnaround may want to look to women (10% were Strategist) and over-55s (14% fit the bill).

One should of course take this data with at least a mild pinch of salt - for a start, not all businesses actually need transformation. And not all humans can be put into boxes either.

Ironically, the report noted their Strategists ‘often complain about feeling like a square peg in a round hole’. That does raise an important point, though. Maverick leaders ruffle feathers – and have to in many turnarounds – but to succeed they have to fit into an organisation to persuade it to change.

For example, Steve Jobs and his torrid temper may have succeeded, but for many he was Apple. On the other hand, Harriet Green’s untimely departure from Thomas Cook indicated her supercharged style didn’t suit everyone at the German-dominated travel company.

The report also doesn’t mention the specific experience needed to turn a company around or respond to industry-shaking change. While EasyJet’s Carolyn McCall proves you don’t necessarily industry expertise to turn around a company, disgraced former Co-op Bank chairman Reverend Paul Flowers is also a case in point that banks at the very least require extensive experience at the top.

PwC pointed to uber middle class supermarket Whole Foods’ ‘radical’ transparency, including publishing company-wide salary data, and Qantas’ inclusive ethos during its turnaround. And listed a number of things, including openly addressing failure and letting staff self-manage, that it thinks could help create more ‘transformational’ leaders (with the implicit hint that you should definitely call its consultants to help you wit that).

But the debate about whether these earth-shaking leaders are born or made will continue to rumble on, not least because they’re so apparently rare. Then again, it often only takes one person at the top to kickstart an organisation into action.

By Stephen Jones
15 hours ago
Food for thought