It’s a question working mothers hear frequently and one rarely asked of working fathers. ‘How do you balance work and family life?’ For Joanna Jensen, the CEO and founder of baby and toddler toiletries brand Childs Farm, the answer is simple.

‘I didn’t in the early days,’ she says candidly. ‘Because when you’re starting a business it really is 24/7 and I literally worked every hour that I could, taking the time off to feed the children, do their homework, read them a story and then I’d get back on the computer. But if you want to start your own business that’s the price you have to pay.’

Since starting her business in 2010, Jensen’s secured listings with the likes of Waitrose and John Lewis and is launching a baby range exclusively with Boots this month. Turnover is expected to hit £2.2m by the end of this year. The products went through trials to get the seal of approval as being suitable for sensitive and eczema-prone skin. ‘People are so desperate not to have to put steroids or petrol-based products on their children’s skin,’ Jensen says. ‘The NHS says about one in five children in the UK has atopic eczema, so you’ve got a market desperate for something that’ll work on their kids’ skin, but one that isn’t a medicinally industrial product that could have long-term implications.’

She created the business after failing to find suitable products for her own two young children (the youngest was 18 months at the time) with delicate skin and fine hair and much of the brand ties into her own family. The former investment banker named the business after her own farm in Tadley, Hampshire and the colourful illustrations on the products were inspired by the family’s love for animals. ‘We’re down to one horse, four dogs, a cat and nine guppies,’ Jensen says. ‘Then we’ve got a couple of extra dogs in the office.’

The office happens to be ‘about ten paces from the front door of my house’, which has meant Jensen’s children have been popping in as it’s half term and helping out here and there. But they’re not sold on taking up the family business mantle just yet. ‘At the moment it’s a tossup between that or working for Pets at Home,’ Jensen says. ‘It depends what’s actually in Pets at Home – if they’ve got those funny little dragon lizards then it wins hands down.’ 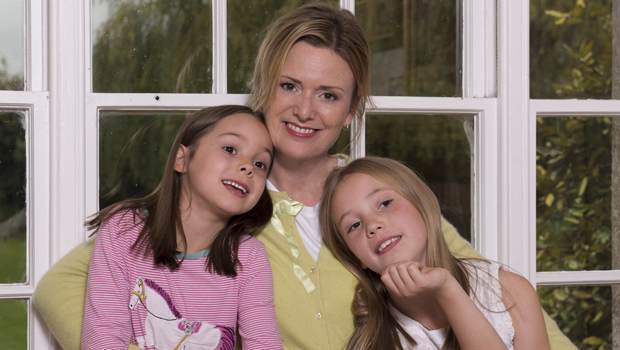 She’s glad they seem to be taking an interest though, particularly as it has been tough to balance a flourishing business with two young children. Jensen’s matter of fact about the experience though. ‘I champion the stay at home mum and would love to be one, but I don’t think I’ve got the psyche for it,’ she says. ‘Where I’m lucky now is that I have a fantastic team of people, which has happened in the past twelve months, so after this I can slope off and take my ten-year-old shopping in Basingstoke for trainers. I can do those things without thinking, "Crikey, if I’m not here, who’s going to answer the phone?"’

‘I live in awe of people who say they have a balanced work life, I’ve just never had it,’ she says. ‘I’m beginning to get it now and I have phenomenally understanding children. It’s blooming tough and like most mothers you just live with guilt the entire time that you never actually do anything well or properly and you’re always doing everything at half what you think you could.’

Read more: Can a rise in female investors help close the funding gap?

She thinks a desire to stay at home with children is still a significant part of why there are comparatively fewer female entrepreneurs out there. Recent research from Deloitte and the Women’s Business Council said the proportion of women starting their own businesses fell in 2014, despite a record number of new business registrations. It doesn’t explain it all - not everyone wants children in the first place - but Jensen feels it is a consideration for many.

‘I think we’re seeing this change and it’s great to see – we run into lots of house husbands doing what we’re doing, but a lot of the time, women want to be at home with their children as much as they can,’ she says. ‘As much as we’d like to say there’s so many hours of the day to fill when you’ve got little ones, actually your day is pretty chocka. Children stop every five minutes because they’re looking at every blade of grass. They’re actually incredibly time consuming. I think we’d all love to do more but when you’re actually blessed with children you just want to be with them and spend as much time as possible with them.’

Zara Mohammed: "Being one of the few women in the room, I represent something more than just me"

Contrary to the common notion that failure is a great teacher, research shows that it...

By Orianna Rosa Royle
22 hours ago
Food for thought

What's next for professional associations?

Roundtable: The CEOs of the largest professional bodies discuss how to capitalise on the need...

“It also doesn't look like Britain is heading towards a recession,” says the Government-owned bank’s...

My Ambition: Creating an inclusive world for millions worldwide

Marketing, sales and customer service leaders shared their insights on everything from podcasting to Big...

"I don't want to be the external face of the brand"