Stronger action is needed to prevent London from sliding into another housing bubble, an influential group of economists has warned.

The EY Item Club says the capital’s house prices are on track to cost more than £600,000 by 2018. That will be more than three times the average house price in Northern Ireland and the North East.

In a special report, the forecaster said there are no fears of a bubble in the rest of the UK, which has ‘returned to normality.’ Prices are expected to rise by 8.4% this year and 7.3% in 2015, before cooling to around 5.5% a year, as Help to Buy comes to an end and interest rates steadily increase.

But in London, house prices are leaping ahead. According to the latest data from the Office for National Statistics, prices in the capital jumped by 11% in the year to November 2013, pushing the national average up from 3.5% to 5.4%.

The report said that house price inflation in London has been driven by overseas buyers who have benefited from a weak pound. Particularly in central London, the housing market should be seen ‘as an investment market, rather than a residential market,’ the Item Club stated. 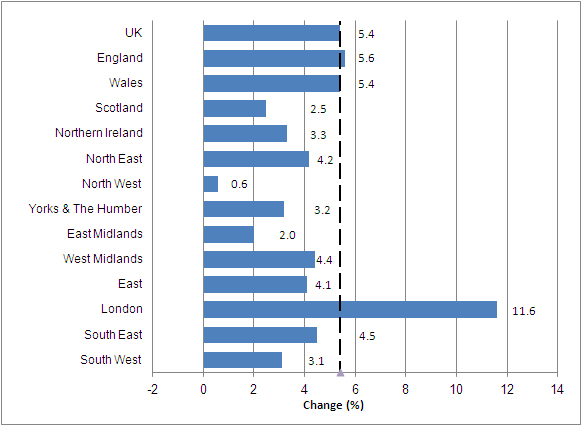 To prevent a bubble, the government should intervene in the market with actions directed specifically at London, the report argued. It could also relax planning rules in and around London and sell its brownfield land holdings off to housebuilders more quickly.

‘The government still owns a sizeable amount of brownfield land which could be sold off to house builders more quickly than it is currently,’ said Andrew Goodwin, senior economic advisor to the EY Item Club. ‘There is also a case for the government to use its own low borrowing costs to fund a programme of house building. Large public sector building programmes have been pursued in the past, but in recent years local authorities have built only a couple of thousand properties a year.’

In a separate report, think tank Civitas has called for restrictions on rich foreigners buying homes in Britain as an investment. Wealthy overseas investors have contributed to ‘rampant house price inflation’, pricing hundreds of thousands of younger residents out of the market, the report said.

The think tank argued that non-UK residents should only be allowed to buy a property here if that investment will add to the number of homes. It pointed to a similar scheme in Australia, where all non-residents wishing to purchase property must apply to that country's Foreign Investment Review Board (FIRB).

58 minutes ago
Food for thought