Peter Gummer (Baron Chadlington) has been successful at just about everything he’s done. He built Shandwick, the UK’s largest PR company, in seven years flat. Then he sold it and went on to do it again with a public group, Huntsworth. He was a close adviser to the former prime minister David Cameron and chairs his local constituency association. He now runs a strategic consultancy advising governments, large organisations and colleagues in the industry.

When he comes up with ideas, they are usually because he has completely immersed himself in the subject.

‘I came out of Cambridge [University] able to think. It allowed me to become so engrossed in a subject.

‘I’ve become better at that over the years. Sometimes the barriers to the great ideas are more about who takes the glory. I don’t need to do that any more so it’s easier for the ideas to get adopted. Young people face a number of barriers. One is concentration. Many young people can’t do that for any length of time. So much of what they do is website- and screen-driven so the concentration span is shortening because they get fed up. The previous generation really got involved in the adventure of learning.’

You can research something very precisely these days and find out just that alone. Lord Chadlington says there’s no penumbral learning: ‘When I went to look up something, I went to the encyclopaedia and looked up the word euthanasia then I would notice other words beginning with E and I’d learn other things.’

Lord Chadlington was at university when JFK was president. ‘He was a great reader. He used speed reading but I never did. I loved the process too much to speed it up.’ Not only does he like reading, but he also likes hard-copy books and likes the way the book feels. His house, he says, is full of hundreds of books.

‘People have lost their sense of awe. Big open spaces give that to people.’ He says he often sits in the local church, not because of religion but because of the silence. ‘Young people are overloaded. It’s in large part the fault of the parent. If they send them to the school that has the best academic results and send their pupils to the best universities, they have their priorities wrong... What matters is whether they come out understanding, sensitive and balanced people. It’s about getting our humanity back. The duality of this sensitivity and intellect is what I’m really interested in.’

Every year he has two separate weeks away from his family, on his own just to think: ‘Nobody can disturb me. It’s a cleansing of the brain and body. I listen to a lot of music. I find it to be incipient spirituality. I listen to Bach all the time. The Bach Cello Suites are hard work. Nobody is used to listening to music which is hard work.’

He remembers hearing Mozart’s 39th Symphony for the first time: ‘It stunned me, it was the most beautiful thing I’d ever heard. That was one of the most memorable moments of my life. It was completely life-changing for me. Not about getting a degree. It was about learning.’ He tries to read a poem every night before going to sleep.

‘I’ve had the "imposter syndrome" all my life... We’re all play-acting to some extent. The higher up you go, the more you feel it. You’ve got to keep your feet firmly on the ground. That’s where your home life and spirituality helps.’ 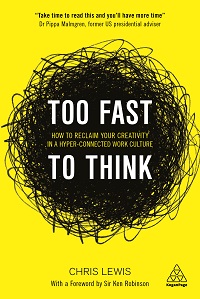 Too Fast to Think by Chris Lewis was published by Kogan Page this month, priced £14.99. This extract is reproduced by permission of Kogan Page.