Manchester United may have had its worst finish in the history of the Premier League last season, but off the pitch it raked in the revenues and was promoted to second place in Deloitte’s annual Football Money League.

A quarter of that was ‘matchday revenues’ (tickets, merchandise, etc), while 31% was from broadcasting rights. That will take a hit this season given Man U’s failure to qualify for the Champions League, which has cost it an estimated £40m-£50m. The top scorer though was commercial income – and the record breaking General Motors and Adidas sponsorship deals don’t even kick in fully until this season and next respectively, although the team's revenue has fallen of late.

Real Madrid, though, was the winner once again as it scored the ‘doble décima’ – topping the rich list for 10th time in the same year it won the Champions League. Los Blancos made an eyewatering €549.5m, a year after it became the first club to pass the half a billion euros mark.

Bayern Munich and Paris St-Germain stayed in third and fifth places, while Barcelona swapped with Man U in fourth. And the top 10 was all very English thanks to the £1bn annual TV rights deal - sixth to ninth positions were taken by Premier League champions Manchester City, followed by Chelsea, Arsenal and Liverpool. 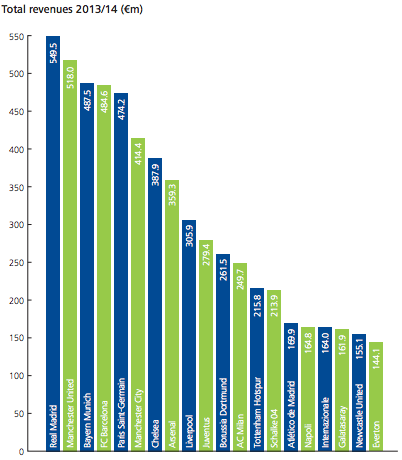 Meanwhile, Sports Direct billionaire Mike Ashley may not be the club owner Newcastle fans wanted (or Rangers fans, for that matter…), but he isn’t doing half bad. It entered the Money League in 19th place, with income of €155.1m and is ‘commercially in the strongest position in [its] history’.

‘Every Premier League club reported record revenues in 2013-14,’ Deloitte senior manager Austin Houlihan said. ‘The fact that all the clubs in the Premier League are in the top 40 is testament to the huge appeal of the league globally and also the equality of the distributions the clubs enjoy relative to their European counterparts.’

And with Sky and BT bidding behind closed doors for the next lot of Premier League TV rights this week, they’re only likely to rise up the rich list rankings.