Preston has just been awarded the rather depressing gong of Britain’s ‘unhealthiest’ high street, with betting shops, pay-day loan providers, tanning salons and fast-food sellers all leading the UK down the road to public health ruin, according to the Royal Society for Public Health. 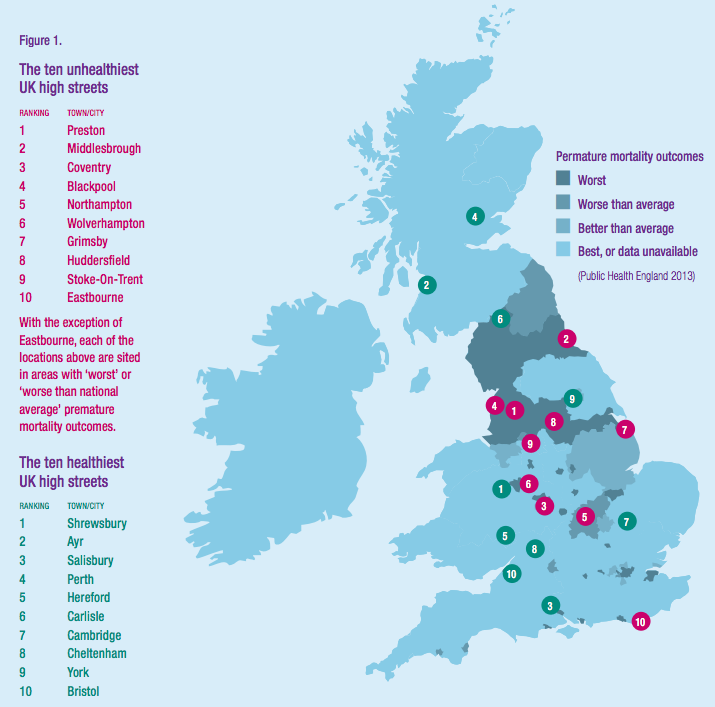 The research, which amalgamated past studies, a consultation with public health experts and a survey of 2,050 members of the public deemed leisure centres, pharmacies and libraries as conducive to clean living. No surprises there then.

‘While our ranking of towns and cities is by no means a reflection on whether these areas are generally healthy or unhealthy, our research does find higher concentrations of unhealthy businesses exist in places which already experience high levels of deprivation and premature mortality,’ said the RSPH’s chief executive Shirley Crarmer.

But what to do about this concentration of ‘bad’ businesses? The RSPH, an independent charity, argues for local councils to get more planning powers and to be able to set different business rates to favour ‘healthier’ companies. It also recommends a 5% limit of each type of business on the high street to stop ‘oversaturation’ (a tautology if ever there was one).

It all smacks of a rather authoritarian utopianism. Some of the ‘unhealthy’ businesses highlighted clearly do encourage bad physical health. But if we don’t stop shops selling cigarettes, for example, then why should we place strictures on the numbers of skin cancer-inducing tanning salons? Moreover the RSPH’s definition of businesses that encourage ‘healthy choices’ encompasses those that promote ‘social interaction’ and ‘positive mental wellbeing’- both of which are extremely hard to define.

The unspoken facts here are that poorer people tend to be unhealthier and so-called ‘unhealthy’ businesses are more common, or at least more concentrated, in more deprived areas. Engineering high streets smacks of paternalism, the wealthy swooping in to prod the downtrodden masses into spending more time in spin class and the local library book group.

And of course there’s the reality of supply and demand – many people can’t afford gym membership and shopping in Holland and Barrett, or simply don’t want any of that. And the well-documented decline of the high street, driven by the move to online shopping as much as the recession, is completely ignored by the RSPH. There's a reason 'unhealthy' businesses like betting shops are so popular – and the Government is already doing just fine regulating things like potentially addictive fixed-odds machines, while the internet will probably kill off most of the stores in a few years anyway.