To go from devising a brand new business model – the subscription box – to facing an explosion of me-too competition from well-funded rivals within a year is a pretty tough introduction into the life of the entrepreneur.

But that’s what happened to Katia Beauchamp of Birchbox and her co-founder when they set up the beauty box business six year ago.  ‘We launched in beta when we were still at business school’ says the 34 yr old former property finance-exec and Harvard Business School graduate. ‘We were overwhelmed by the demand and went for full launch in Sept 2010. We hit our five year revenue targets in only seven months.’

But such explosive growth did not go un-noticed by rivals and within a year, ‘We had well-funded copy cats in every country we were operating in. In the US even Amazon had copied us. We were just like "What?"’

Now there are over 600 subscription box businesses in the US alone which will send you regular tasters of everything from tea and wine to note paper, sweeties and even socks. The sector even has it's own buzzword - discovery commerce.

Dealing with such an explosion of rivals calls for a cool head and focus - try not to be distracted, keep innovating, and execute better than the upstart rivals, says Beauchamp. ‘What people end up copying is the tip of the iceberg, and who cares about that? It’s the original insight that matters – ours was that we were creating a beauty business for the average woman, and that is 70% of the market.’

She credits the fact that Birchbox is still around while many of those early rivals are not to sticking to the basics of giving their customers what they want. ‘We are not loyal to our business model we are loyal to our customer – as her needs change then we must too, or we will become irrelevant and get disrupted in our turn.’ 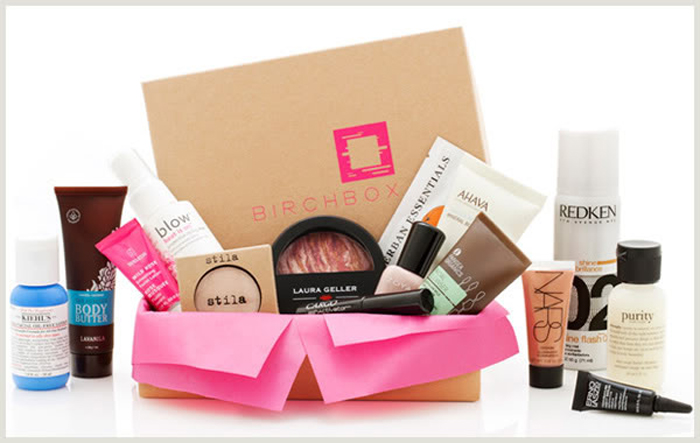 Birchbox subscribers pay £10 monthly (or £100 for a year) and in return receive a small box every month containing 5 sample-sized high-end beauty products to try (The original Birchbox is shown above). The idea says Beuachamp is to help customers who are not beauty obsessives discover products they like but would not normally find because they don’t spend hours trawling the high street.

Full sized versions of all products can be bought on the Birchbox website. ‘We didn’t found a business just to sell beauty samples. We want to be the place where women buy beauty.’

The idea came to Beauchamp and her co-founder Hayley Barna (who is no longer involved with the business) because they both noticed that, while digital start-ups were disrupting many sectors, beauty was not one of them. ‘In 2010 only 2% of beauty products were bought online. That really stood out to us because we knew it was a massive industry.

‘It turned out that there were many challenges to beauty becoming internet based – thousands of new products are launched every year and consumers will not buy prestige brands before trying them.
‘That’s where the subscription box came from – it was a brand new idea to help us overcome what the internet was bad at.’

And although she struggled initially to sell the idea of an online beauty business to rooms full of male VC’s, persistence paid off and Birchbox has now raised a total of $86.9m in four rounds of funding. ‘Everyone says they are willing to consider anything, but being someone’s first investment in a category is tough. There should definitely be more female VC’s, it all starts with capital’ she says.

It’s been quite a journey for Beauchamp, who had no intention of becoming an entrepreneur until she went to Harvard  (an institution anyway better known for producing bankers and consultants that entrepreneurs) ‘You have to take a class in entrepreneurship, and even though 85% of the case studies we did were epic, ruined life and divorce type failures, that was when I realised that this was what I wanted to do with my life. I just thought, what an opportunity to get to know what you are made of.’

And although the classic entrepreneur stereotype is of someone too impatient to get on to bother much with further education, she says that business school can have a lot of advantages for those who want to set up on their own. ‘We got a lot of support from Harvard, I can’t tell you how much. And I wasn’t from a business background, I didn’t have those contacts. It was great from a networking point of view.

‘If you have those things anyway then business school isn’t necessary. But for me there is no way this would be here if I hadn’t gone.’

Her biggest challenge she says has been managing and motivating her team. ‘The way I used to define caring for my people was that I tried to protect them. I was like, you have all the fun and I’ll do the hard stuff. That was naïve and a huge mistake.

‘It was very lonely and a crushing burden. Now I am part of a team and it’s so much more enjoyable and less daunting.’

In the UK, Birchbox has just passed the 100,000 subscriber mark and has signed up brands including Bobbi Brown, Darphin, Benefit, and Elemis. Will there be a bricks’n’mortar London store opening soon, to complement thoe ones already in New York and Paris?

‘We will have one but I don’t have a date yet. It depends on the size of the business here’ says Beauchamp. ‘Physical retail enhances the relationship with the brand, but it has to be profitable in their own right, it’s not just a marketing activity for us.’

After six years at the helm, Beauchamp has also realised that the role of the leader has to change as the business changes, from being the person who does everything to the person who helps others achieve more.

‘It’s important for the leader to be shoulder to shoulder to start with, but you can’t stay that way forever. I’m asking people to evolve all the time, so how is that not my job too?’

How I prepared to step back from my business

Intelligence report: How to scale a business

5 ways to improve the mental wellbeing of your staff

How businesses can retain staff amid the 'Great Resignation’