In a David and Goliath style battle between businesses, there are few Goliaths fiercer than Uber. The taxi hailing app, founded by Travis Kalanick and Garrett Camp, has genuinely taken the world by storm. It now operates in more than 200 cities and was recently valued at an earth-shattering $40bn (£27.5bn) – making it the world’s second most valuable private technology company.

The controversial startup has taken no prisoners along the way though, enraging taxi drivers and forcing regulators to tear up decades-old rulebooks to cater to this new technology. In London the app has been the subject of repeated protests as black cab drivers demanded authorities banned its controversial technology.

Uber is unrepentant, but British entrepreneur Nicko Williamson thinks that engaging more with traditional cabbies could be the way forward. The business he’s created and is CEO of, Bounce, offers black cab drivers the chance to compete on price with minicabs – giving them the chance to pick up fares they would otherwise have missed out on. 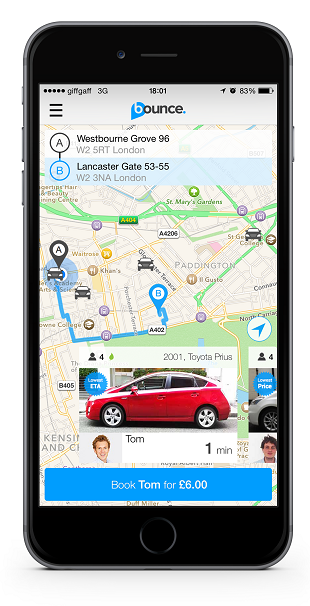 ‘I 100% empathise with them,’ he tells MT. ‘They invest a lot of money in their cab, which is an expensive piece of equipment and very expensive to run, The Knowledge is like a university degree, it's an amazing thing.

'But when you've got a comparison between a black cab and a Toyota Prius and the consumer is paying sometimes literally half price to ride in the Prius, it's difficult to justify that.’

Taking on a giant like Uber isn’t going to be easy, but Williamson at least has previous experience of growing a taxi business. He founded his previous business, an eco-friendly taxi service called Climatecars, in 2007, shortly after leaving Bristol University.

It raised £500,000 from investors, was profitable within three years and last year turned over around £5m. He's since handed over the reins after deciding to set up Bounce with co-founder Simon Mizzi, who had a hand in the launch of the minicab comparison app Kabbee.

The app first launched in April last year, but it's just been updated to further differentiate itself from Uber. Now black cab drivers are compared alongside minicab drivers, and are able to lower their prices to compete at less busy times.

Users choose a specific driver and car, so they know exactly who to look out for when they get picked up, and are show the fixed fare up front. He's keeping schtum on exact numbers but says 'app opens' have increased by 400% since the new update went live earlier this month.

Williamson's raised a total of almost £1.7m from investors, mainly through angel networks and his own contacts, and is currently focused on making a success of things in London. It's a competitive space though – Bounce is going up against not just Uber but also the likes of GetTaxi, Hailo, Minicabit and Maaxi.

'The challenge is funding,' says Williamson. 'Obviously Uber has an insane amount of funding which enables them to get a huge amount of visibility.

'For us, we're a speck in the ocean compared to them. We're trying to be as clever as we possibly can with our marketing spend to make it as targeted as possible. We have to be nimble we have to be different. We believe that we can't go head to head with Uber on the same business model, so our model is as different as it possibly can be in this space.'

At the moment Bounce has got more than 1,000 drivers signed up, and a similar number of applications pending. Williamson admits cabbies haven’t all been bowled over though. ‘On the one hand, the more progressive, enthusiastic guys have been like, "yeah, I understand that's a good way of making more money," they're open to change,’ he says.

‘And then you get the more old-school guys who are just like "I will not work alongside a mini-cab, I've done my Knowledge test, why should I not be charging these kind of prices?" These guys are closed to the future and the reality of the market, which is that its changed and it's not going to go back – and we want black cabs to play a part in that.’