Adam Tavener, the founder and chairman of Clifton Asset Management, is a busy man. In just a couple of years he’s gone from being the leader of a fairly successful asset management business to one of the most influential members of the alternative business finance industry.

As the man behind Alternative Business Funding, a platform that connects businesses with alternative funding providers, like crowdfunders and P2P lenders, he’s ended up advising the Government on how to implement new legislation forcing banks to refer rejected business loan applicants.

‘I’m having meetings and conversations with people I wouldn’t have dreamed of two years ago,’ he tells MT. ‘My diary is full of stuff that makes me think, "Really!? Wow, how did that happen."’

It’s all a far cry from his early career. Born in Timsbury near Bath, he left school with solid O-level results but a family fall-out meant he had to find work instead of continuing his education. After an unsuccessful spell at an estate agent (‘I probably had some attitude problems and some issues around authority,’ he says), he picked up his backpack and headed for Europe, ‘to seek my fortune.’

There he found himself working as a deck hand on a yacht in Majorca. ‘It was quite good fun but unbelievably violent at the same time. I went through all sorts of interesting scrapes and ended up in hospital – that’s where this came from,’ he says, pointing out a faded scar on his arm - though he doesn't elaborate any further.

‘But oddly enough, it was an education in its own right and it certainly knocked some of the lumps off me,' he says. 'The sort of people I was working with weren’t going to tolerate any sort of attitude.’

But things took a turn for the worse, he says, and he soon decided to return to the UK. After sleeping on friends’ sofas and park benches for a month or so, he eventually landed a commission-only sales job with a savings and investments distributor in Bristol – although not before causing a bomb scare.

As he was sofa surfing, Tavener had nowhere to leave his other clothes after changing into his suit for the interview. So he left his bag behind a door in the building where it was taking place. But this was at the height of The Troubles, and not long after the IRA had set off a bomb in Bristol, so the building ended up being evacuated.

‘I had to kind of put my hand up and own up to the fact that it was in fact my really stinky clothes,’ he says. That didn’t stop him getting the job though. ‘Because they had no investment in the outcome, that particular company offered to give me a position which was essentially a desk, a yellow pages and a telephone.’

After a few years in sales Tavener decided to set up his own business in the same field – initially as a partnership with some colleagues and in 1985 he went on to launch what would become Clifton Asset Management. Initially just him, a phone and a desk under his friend’s stairs, today the firm employs around 100 people and has £380m of assets under management.

It also offers an unusual business finance product called Pension-Led Funding, which allows entrepreneurs to tap into their pension pot to fund their business expansion. That’s how Tavener came to be involved with the Government’s legislation, which will force banks to refer small businesses to other lenders. Tavener says the seeds of that legislation came from an Innovators in Finance summit he attended at Downing Street at the start of 2013.

‘I was walking over Westminster Bridge thinking "if I’m going to this thing  I might as well have something decent to say". I thought ideally, what would I like out of this?

He stood up at the event and suggested that the best way to help small businesses with the funding gap would be if banks were forced to pass them on to other providers if they didn’t want to lend to them. Lo and behold, legislation is currently passing through Parliament that should make that the case.

To demonstrate how the referral system could work, Tavener drew together the biggest names in  alternative finance to launch Alternative Business Funding, a portal which helps businesses decide which source of finance could work best for them. 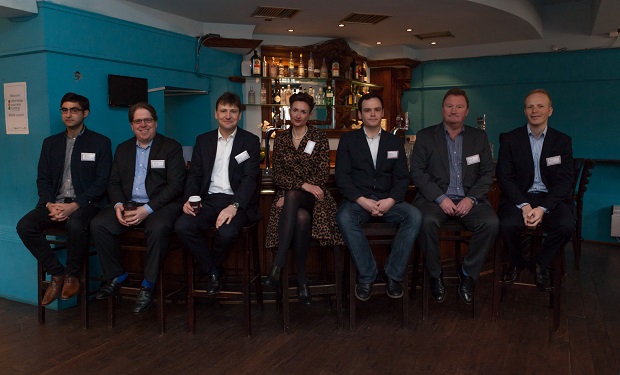 The founders of MarketInvoice, Seedrs, Zopa, and Platform Black, a representative of Crowdcube, Tavener and a founder of Funding Circle at the launch of ABF last March

‘The reason for that was I could kind of see the way that that direction of travel was going,’ he says. ‘I thought, if people are going to try and huddle together into groupings, the only way to guarantee your admission to a grouping was to make it your grouping. I thought – there’s an opportunity to seize the momentum here.’

The platform was launched in March last year and is set to be one of the places banks will be able to refer rejected applicants to. Along with Clifton, its founding members were Crowdcube, Funding Circle, MarketInvoice, Platform Black, Seedrs and Zopa.  ‘It is intensely difficult to get seven founders of business who like to be in control to sit around and talk about anything,’ he says.

The platform now has more than 20 members offering everything from short-term business cash advances to community development loans, and Tavener says investors have been offering to put some cash in to help develop the software further. He admits there's always a risk of being disrupted though.

'There is a danger with ABF that we go "ta-dah look how clever we are,"' he says. 'It's up to us to keep pushing hard, continue to be thought leaders and stay in front. If we can keep doing that we should always stay ahead of that curve, but we are not insulated from disruption at all – we’ve got to learn to keep disrupting ourselves.'