Israel-based Maya Gura, founder of mobile health and beauty start-up Missbeez, makes her living by matching up time-poor professionals looking for a treatment with a handy nail technician, yoga teacher, personal trainer or soon even a ‘closet organiser’ (whatever that may be).

But while her customers may be drawn from the comfortably off middle classes in Tel-Aviv and London (with Barcelona in the pipeline) her suppliers are not. Her intention in starting Missbeez - a kind of Uber for beauty - was to help provide work for women who because of other commitments in their lives find it difficult to do a conventional job.

And most of the 400 or so ‘treatment providers’ who have signed up in the 18 months since Missbeez opened for business are female  ‘We work with a lot of single mums’ she says. ‘You can control your own time and have as many customers as you choose. That flexibility is invaluable to those mums.’

Inspiration for the former tech exec turned entrepreneur (who also holds a masters in criminology) struck when she was volunteering in a rehab centre for former sex workers trying to get their lives back on track.

‘Working with those women, I realised that they were tigers, what some of them went through was insane but they survived and still wanted to make something out of their lives.’

She realised that whilst the women in the hostel had energy and drive aplenty, they lacked the skills and knowledge to turn vision into reality. ‘‘One of them wanted to be a dog trainer, others wanted to be self-employed professionals in cooking, beauty, child care.  These were all simple business ideas, I could have executed them in a week. But to those women it was impossible, that was the gap.

‘That was the moment that Missbeez was born. The opportunity to do well is something that everyone deserves but not everyone gets. I realised that some women get no opportunities at all.’

Fast forward a couple of years and having raised $2m (£1.6m) seed capital from Israeli angel investors, Gura’s business now provides a marketplace matching self-employed therapists and beauticians with customers looking for good quality, quick and hassle-free health and beauty treatments, in their own homes and booked in moments on the Missbeez app.

And while her original idea to sign up the former sex workers didn’t work out, its legacy lives on she says in the way that Missbeez is structured with the suppliers right at the heart of the business. This contrasts, reckons Gura, with some other well-known gig-economy models where the interests of service providers (remember those Deliveroo strikes last year?) seem to come a long way behind those of the customers and investors.

‘We optimise predominantly from the suppliers' point of view, we ask the girls everything from what is the right price for them to get to the customer’s house to what design they would prefer for the aprons and t-shirts. If the supplier is happy the customer is happy too’.

After the initial launch in Tel Aviv, London was next on her list, and so for six months of the last year she has been racking up the airmiles, spending weekdays in London and weekends back home in Israel. ‘I was flying like I was on the bus’ she says.  ‘It was hard to leave the family but it’s not forever and my kids know that.’

With 39,000 users signed up so far Missbeez is a minnow in an app economy where success is usually measured in millions or billions of users. But small can be beautiful too and with an average transaction value of $55 and 76% of revenue from satisfied repeat customers she and her team are clearly doing something right. 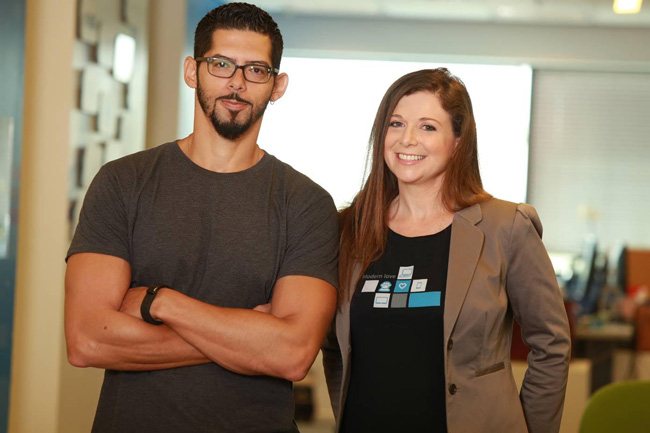 The best move she has made, she says, is getting her co-founder and CTO Gil Bouhnick (pictured with Gura, above) on board. He is the brains behind the algorithms that keep Missbeez route optimisation and logistics systems running smoothly, and the scalable tech architecture which makes rolling the service out into new locations as quick and painfree as possible.

‘Gil is an expert in management algorithms and I had to chase him for five months. It took a lot of poker faces and psychology, but he is the best thing that has happened to this company. He has 3 kids and he works 24 hrs a day. I truly don’t know when he sleeps!’

Being in charge has been a big step up for Gura, who has been involved in other start-ups  but never before as CEO. ‘There is so much detail, it’s making me a bit ADD’ she jokes, citing the complexity of making sure that everything from the feedback and profiling to the route-planning and even parking options for suppliers work seamlessly. ‘ This business is complicated and very operational’ she says. ‘That’s new to me and I have to do a lot of learning.’

In return for lining up customers and marketing their services, Missbeez takes a 20% commission on sales from its suppliers – a hefty but fairly typical sum that compares with the likes of JustEast, for example. But Gura says that the premium earned for being on Missbeez more than compensates.

‘Only self-employed professionals or businesses have the chance to get really successful. Our beauticians keep 80% of the revenue they earn. Some of them used to work in beauty salons where they only got 15%, others maybe had their own small clinics but struggled to bring in new customers, because that’s much more complicated when you are on your own.

‘When they are with us it is simple – be good at what you do, serve the customer and be nice. Do that and you’ll get more customers.’

Gura’s ambition is to make Missbeez into a one-stop shop for lifestyle services – everything from a facial for you to a maths tutor for your kids – ‘it’s 2017 now, you should be able to buy all these things from an app with a couple of clicks’ but she decided to start with beauty because of the potential for growth. ‘The global market for hair and nail salons is $400bn’ she says. And it’s a pretty fragmented sector too. ‘It’s a huge opportunity.’

Making it happen hasn’t all been plain sailing though – asked to name her greatest mistake, Gura recalls a botched response to some premature publicity in early 2016. ‘Back in January we got a lot of press coverage in Tel Aviv, I was on the cover of a big business magazine. We got a lot of customers coming to us straight away, but we just weren’t ready. We only had 20 or 30 beauticians then and we couldn’t deliver the services.

‘We panicked so badly, I remember leaving the building and standing on the grass outside screaming. It was scary.’

Their response – to limit booking only to those people who had an access code – backfired, the new customers went away and Gura had to work very hard (and spend a lot of money) to get them back again later on.

The lesson she says is that rather than limiting access for new customers, they should have simply signed them up, apologised for the delays and gone back to them when they had got enough providers in place. ‘When the customers come, don’t send them away’ she says.

To keep the customers happy now they have got them, every supplier is vetted in person before they sign up, their qualifications and equipment checked out. ‘We have started recruiting local teams for Barcelona. Our community managers meet all the professionals who sign up with us. The vetting is pretty complicated – we want to see their qualifications, their employment history, recommendations from customers, experience, equipment - they will be going to customers’ houses so you need to see their faces.’

Gura – who was born in Lithuania but moved to Israel when she was 12 – is finalising her A funding round with a range of European VCs. She has always been keen to grow the business across Europe. ‘The potential is huge – I think about the women I see in Bucharest or Budapest, the way they look when they are just out waking the dog. In Israel we only dress like that for a wedding.’

So why start in Tel Aviv? "The tech scene there really helped us get going. I don’t know how anyone does business outside of Israel. It’s a really close community, really intimate and we all know each other and help each other out.

‘I am quite new in London and the problem is that nobody knows me here.’ she says. ‘Not yet, anyway.’

"Why I took my company public at an early stage"