The UK television industry isn’t exactly well known for its diversity. Earlier this year, Ofcom found that minorities are ‘underrepresented’: the five main UK broadcasters have an average of 12% BAME employees, with the figure falling to 6% at senior level.

This was one of the main challenges 27-year-old TV entrepreneur and former actor Josh Wilson had to grapple with when making his way in the business.

‘It was more an anger about how people like Idris Elba had to wait until their early 40s before getting their break,’ he says of the decision to set up the Wilson Worldwide in 2013. ‘How many Idris Elbas are there who we’ve missed out on? I realised that I had to own something or have control of something in order to put myself into productions. That’s the only way I’m going to be able to do this.’

Wilson had gone into sales straight from college. By the time he was 19, he was heading up a team in Toronto, where he got his first taste of film production, finding common ground between his love of acting and of deal breaking.  He was instantly hooked.

‘I understood the business, investment and acting angles,’ says Wilson of his experience of making Komatose, which he also starred in and exec produced with Infernal Trio Entertainment. ‘When I got back to the UK, I had to figure out how I was going to find my place in all of this.’

Wilson took a short course in acting at the Royal Academy of Dramatic Arts in 2012, and set up Wilson Worldwide shortly after, working on corporate video and commercials. It did well, but not well enough to support a yearly wage, so he became an industry journalist in 2014 to make ends meet.

The experience enabled Wilson to build a network and learn the minutiae of the TV business, while reinforcing his desire to become his own boss for good. ‘I realised then that I can’t be in a situation where I can’t do ideas, not because they weren’t good ideas, but because it was just too cumbersome,’ he says. ‘I realised that I could do things better and I had to leave.’

The results of this leap of faith could have been disastrous. ‘I was sleeping on the floor in a sleeping bag on yoga mats,’ Wilson says. He was able to sign a few contracts to raise about £4,000, but once that ran out it became a ‘really dire situation.’

The situation was so desperate that Wilson was ‘eating loads of biscuits’ from his shared office because he knew that he couldn’t afford to have dinner. ‘I had times where I really didn’t want to continue, I mean with life in general. It was really tough.’

After walking away empty-handed from meeting after meeting, Wilson finally got the investment his firm needed to be taken seriously when he received £200,000 from MJB Investments, a group of Asian investors that wanted to put funds into a UK Film and TV company.

After that, his first big break came with Mission Mudder on Sky, which premiered earlier this year, turning over £750,000. The show follows six Olympic athletes as they take on Tough Mudder challenges to run the most miles for charity. There’s also Chasing the Dream that follows Olympic boxers to come later this year on Sky, which has turned over £400,000.

Wilson says diversity is just common sense and wonders why bigger companies aren’t taking note. ‘We’re a changing society, and as a creative industry now we’re lagging behind that,’ he says of the current situation. ‘Diversity has to be part of the process because otherwise the product is not going to reflect society. We see it on our screens that we’re producing the same kind of content. Diversity has to be throughout the whole team, not just ticking the boxes.’ Wilson has a small but dedicated team of 10 people that he’s brought in from around different parts of the industry. 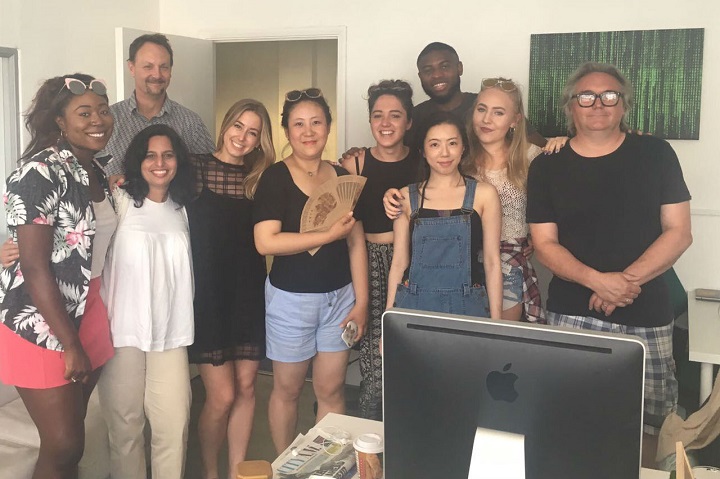 Meet the team at Wilson Worldwide

Perhaps the most notable of Wilson’s recent achievements was making the move into the Chinese market with the £20m, made for TV adaptation of Jeffery Archer’s False Impression.

Spotting the emergence of the entertainment industry in movies and TV – and Chinese leader Xi Jingping’s plan to grow the country’s creative industry, in part through tax breaks – he set up his own Asian division, hiring two people, Susie Tang and Chloe Zhou, who understood both the Chinese culture and media industry.

‘If you’re a westerner it’s not the same, there’s a huge cultural barrier with China. I surrounded myself with people who understood these things better than me,’ says Wilson of the decision, which he credits with getting the Archer deal signed. He hopes to have a Beijing office in 2017 and already has a lot more projects out in the market.

Wilson says he has a responsibility to ‘send the elevator back down’ and begin to tackle what he sees as a huge skills gap in the industry. This year, he set up Genisys, a charity that funds 18-25 training in industry accredited courses for positions in the creative industries.

‘I’ve always come from the mind-set that if there was an issue, I should fix it myself and that’s an issue I have wanted to deal with.’

By Éilis Cronin
22 hours ago
Women in Business

By Éilis Cronin
47 hours ago