Heart disease is one of the biggest threats to your and my health. It’s the leading cause of death around the world, kills one in six men and one in six women, and afflicts 2.3 million people in the UK alone. When sufferers experience heart failure, the organ ends up with scars that can exacerbate the problem. That damage used to be considered irreparable, but thanks to efforts in the field of regenerative medicine, it’s now possible for the tissue to be healed.

Back in June, a small-scale study published in the Journal of Cardiovascular Translational Research found that injecting stem cells into area surrounding the scars could reduce the scarring by up to 40% and improve the heart’s function by 30%. The study’s 11 participants had an expected mortality rate of 70%, but three years later all were still alive. It was a major breakthrough in the field and for Celixir, the small pharmaceutical company that produced the stem cells.

The business was founded by Sir Martin Evans, who won a nobel prize for his stem cell research back in 2007, and Ajan Reginald, a Kellogg MBA graduate and former head of emerging technologies for the pharma giant Roche. ‘I always had this interest in innovation and how you invent stuff, Reginald tells MT. ‘And I think the pharmaceutical industry is probably the best example of how you monetise an invention.’

The duo met when speakers on a conference panel back in 2007 and launched the business, then known as Cell Therapy Ltd, two years later. Reginald describes the company’s regenerative medicine techniques as a ‘technology platform,’ comparable to the so-called ‘Internet of Things,’ for instance. ‘That’s a platform technology that allows lots of devices to communicate with each other across multiple platforms. Our core technology is the ability to identify medicine that can regenerate parts of the body that until very recently have been irreparable...[it] allows us to look at the cellular damage that is in a scar, to identity what has gone wrong and design a medicine that may fix it.’ 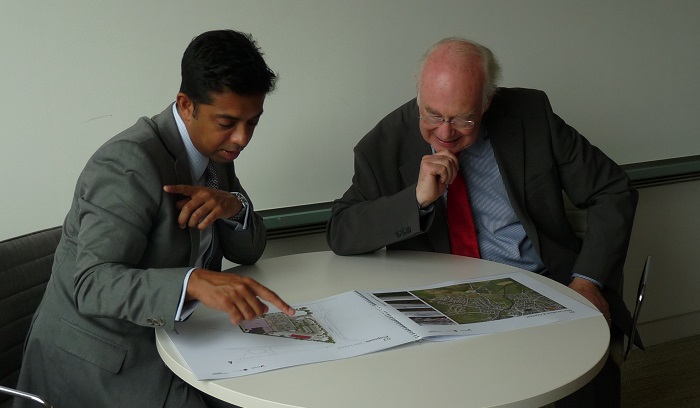 The company has more than 20 specific medicines in the pipeline but its main focus, the aforementioned heart treatment, is still around two years from market. Such is the nature of pharma, where each product requires tonnes of research and clinical trials before being used on the public. There are obvious reasons for that, but it does present a challenge for new businesses in finding enough investment to keep going before it’s possible to make any money.

‘The UK is not a brilliant place to find that sort of risk capital, Europe is worse. The US was better but the market conditions aren’t great at the moment,’ says Reginald, though Celixir has managed to raise money from all of those regions as well as from Asia, where it bagged £12.5m from Daiichi Sankyo, which will have the right to distribute the company’s heart medicine in Japan. If you’re going to risk your money on a long-term pharmaceutical venture then one with a nobel prize winner at the top table is probably a good punt.

It also raised £691,000 through the equity crowdfunding website Crowdcube: ‘Nearly all of us know somebody who’s affected by one of these chronic diseases and we think of regenerative medicine as being for everybody so we thought crowdfunding was a way to allow anyone to participate in [this] innovation.’

The industry is dominated by several big players like Novartis, Roche, Pfizer and the UK’s very own GSK, which each employ tens of thousands of people, compared to Celixir’s headcount of 46. Reginald says that while the giants have the edge when it comes to marketing established technologies, small firms are better at innovation.

‘The kind of stuff we’re good at – new thinking, new ideas, that needs a different approach where you need small, innovative teams.’ The field of regenerative medicine is ‘all quite new and therefore if you want to have significant breakthrough with a new technology that probably happens in small companies like ours. It’s about focus – we’re highly focused in a field of technology and we don’t do anything else.’

‘There’s something unique about that innovation culture in the UK. We quietly get on with world class science, we quietly get on with earth-shattering medical innovation. In the US they have great innovations but everybody has to jump up and down and tell you all about it. That’s probably for me the most important thing about us – we have a culture of combining that excellence in science and that belief that we can do things that nobody else can do, but we do it with a certain degree of humility.’

But would he sell to a foreign buyer if the price was right? ‘There’s no need for us to do it, we’re not looking for that. But if a big company did come along that was really good for my shareholders...and we could treat ten times as many patients, of course we’d consider it.’

I empty my inbox before I go to sleep but because we work with the US and Japan I typically have about 30 or 40 emails by 6 in the morning. I tend to answer those by about 6:30am. I play hockey for the England Masters team (for those aged 35 to 50). So I have a fairly rigorous fitness regime which involves training in the gym until 7am. Then I play with my son until he goes to nursery. That gives everyone a chance to catch up with their emails – normally the emails I receive generate more work for me and my team. I get to the office about 8:30am and I try to get home to put my child to sleep at about 6:30pm.

My actual working day is split three ways. One third of my day is made up of progressing specific projects. Another third is meeting with the people who work for me. I have one-to-ones with everybody who reports to me every week. That’s hard but it’s really important – everything that we’re doing is really complicated and it’s cutting edge so you need to talk about it.

The last third I try to keep free because there’s normally some massive thing that I have to do – something meaty that I really have to spend time on. Whether it’s reviewing an FDA filing, looking at analysts’ reports or something. It’s a bit like how Mark Zuckerberg still does some programming. That’s really important because it keeps your feet on the ground. I also travel a lot – I fly to Europe probably once a week, Japan roughly once a month and the US every couple of months.

By Orianna Rosa Royle
13 May 2022
Women in Business