The rise of ad blocking has been a growing obstacle for publishers and the digital advertising industry. Lesson one learned: neglect user experience at your peril. Publishers have been the worst hit – losing out on ad revenue when users block ads, but the alternative ways to compensate for the loss have come with their own concerns.

One of the companies offering a different revenue route is ‘content monetisation platform’ (no we don’t like it much either) Skimlinks. It allows businesses to earn through affiliate marketing – they get a commission on web links and content when they redirect customers to other retail sites. Since co-founders Alicia Navarro and Joe Stepniewski created the firm in 2007, tens of thousands of publishers (including many bloggers) have used its services.

Last year the platform generated $625m of ecommerce sales, earning incremental revenues for the likes of Gawker Media, Time Inc and Hearst (as well as some of MT’s sister titles at Haymarket). The average cut a publisher receives varies, though overall it’s around 5%. Commoditised, low-margin products like consumer electronics tend to be on the lower end like 2-3%, while higher-margin products such as fashion can be up to 20%.

As someone who has always known which career path she’d like to follow (she learned to code age nine), Navarro’s slightly at a loss when it comes to the ongoing head-scratching over how to encourage more women into STEM. ‘I think if I had to say, there’s a misunderstanding about what being in technology is about,’ she says. ‘I remember hearing a young girl saying she loved debating at school and her careers adviser said "You should be a lawyer." But if you love winning and deconstructing arguments, you should be in tech!’

Once you’re working within tech she feels it’s a welcoming place to be. ‘This is a contentious view but I don’t believe there’s anything dramatically broken with the industry, stopping women from getting careers,’ Navarro argues. ‘I think it’s one of the most flexible and adaptive industries you could be in as a woman; it’s just not a lot of women are interested.’

It was her own unshakable interest in technology and creating a start-up that meant Navarro persevered with Skimlinks, despite an earlier string of failed business attempts. She won’t divulge recent figures, but Companies House records show Skimbits (its parent company) turned over £4.4m in the year to June 2014. When prodded on whether the firm is profitable, she says, ‘We could be if we wanted to be, but every time we’ve become profitable we’ve ended up raising more money and investing it back into the tech and the team to build the platform out even further’.

Its growth does, though, raise questions about the direction journalism is headed in. Does the need to boost flagging revenue mean publishers will become too brand-orientated, with a risk of compromising their integrity? 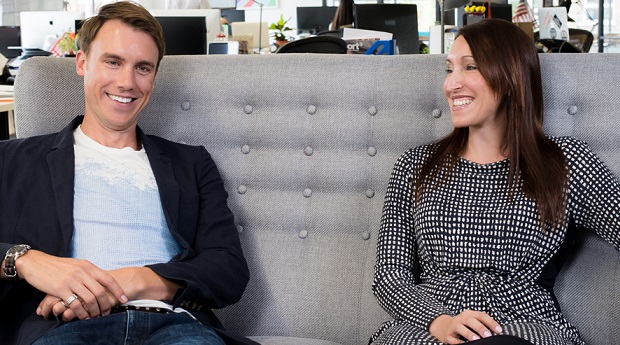 ‘I’m not saying all content should be driven in this way, but you see the really successful publishers – the ones that understand their community – and can create a subset of content that satisfies their more commercial shopping interests,’ Navarro says. Sounds fairly ominous, though she does add, ‘The user engagement with that is what ends up funding the more serious, traditional journalism that should be completely distant from any commercial interest.’

There’s also the distinction between branded content or ‘native’ content and what Navarro calls ‘comtent’. The former is created by a brand and can be distributed automatically through content marketing platforms like Taboola and Outbrain, or in collaboration with the publisher.

BuzzFeed and The Telegraph have been in trouble with the ASA recently for failing to make it sufficiently clear that their sponsored articles were, well, sponsored adverts. It’s clear the industry is still trying to feel out what constitutes plain enough signposting on paid-for content, but repeat incidents like that won’t do much for reader confidence.

‘Comtent’ on the other hand is created and driven entirely by the editorial team themselves. ‘It’s dictated by the editor saying something like "I’m going to write a piece on this season’s bikini trends, because I know them and our community is going to love them",’ Navarro says. ‘If some of the products they write about end up earning a commission then that’s great, but that’s not why they’re writing it – first and foremost it’s because it’s a piece of content they think the audience will love. And it works.’

Skimlinks runs workshops for publishers, which Navarro says trains them on ‘how they can create these pieces of content and keep editorial integrity’. Though the content monetisation platform offering guidance on preserving editorial integrity might raise a few eyebrows.

More and more mainstream sites are embracing this approach though, whether through gift guides or listicles. All are written by the editorial team, but they’re then monetised by Skimlinks, driving revenue and insight into the types of brands users like to buy from. But does this make publishers prone to opting for what will make them more money?

‘It varies by different publishers,’ Navarro admits, but ultimately she’s adamant the most successful publishers are the ones driven by editorial policy. When they are influenced by thoughts of revenue, it’s usually deciding which retailer to link to.

Skimlinks has recently branched out, launching Audiences by Skimlinks in November last year. The service will reward media owners for their data contribution to its platform with audience targeting services.

It may enable advertisers to provide more relevant ads for users, but Navarro acknowledges ‘there’s always going to be a very vocal minority, who hate advertising of all sorts and that’s driven the whole adblocker movement’. Though considering how quickly ad blocking became mainstream (there are now 198m active ad block users around the world), it’s not a problem easily swept under the carpet. And Navarro’s perhaps predictable solution? ‘The only way publishers can survive is if they bring more branding or commerce into their content.’