You might not expect the founder of a supercar club renting out Ferraris to move into the world of electric cars, but Erik Fairbairn felt he had some making up to do.

‘I did once calculate the total amount of carbon emission that my supercar club [formerly ecurie25, now Auto Vivendi] created and it took POD Point over four years until we’d offset the same amount of carbon through electric vehicles,’ he says.

POD Point is Fairbairn’s current venture – billing itself as ‘wiring up the UK for the electric vehicle revolution’. The 65-strong team is working on a public network and has shipped over 20,000 charge points to date,  leading to 300 public bays being set up. It sells points to supermarkets, home offices and destination points, including David Lloyd and Heathrow and also leases points from £40 a month. The company sells chargers for home use too. The government has a £500 grant for home units, which covers around half the price - POD Point sells them from £390 and offers installation.

While there was an element of contrition behind Fairbairn’s second business, which he set up in 2009, he also felt there had been something missing from his first enterprise. ‘Going into the office every morning I had the aim of making it a little bit bigger than it was yesterday – purely commercial,’ he explains. ‘I wanted to look back when I retire and say not only did I build a successful business, but I built one which mattered on a wider scale. I felt if I could be part of enabling people’s move to zero carbon transport then I can genuinely look back and say that’s more than a commercial success.’ 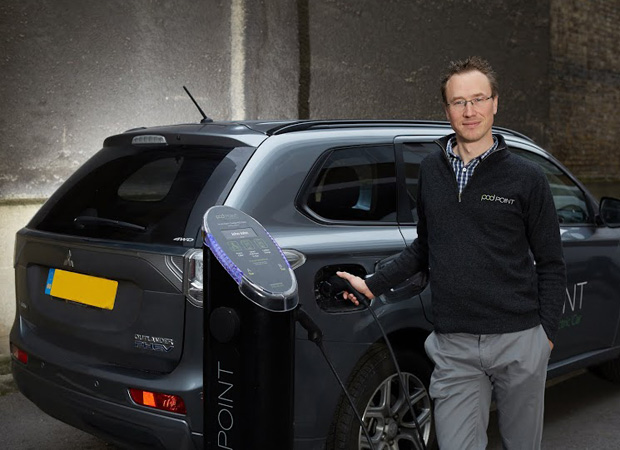 Despite there not being many electric vehicles on the market at the time, he managed to sell POD Point’s first batch of charging points to Tesco in 2009. ‘I thought if we managed to sell a couple to a big company like that, maybe we’re onto something.’ Initially though, it was a difficult market and Fairbairn says flexibility was the key. ‘We had to go where we saw sales opportunities.’ After a couple of years, more vehicles were rolled out and POD Point was then able to concentrate on its original strategy of building a network of charging points.

And Fairbairn is confident – unsurprisingly – that the electric car market is only going in one direction. ‘I have this vision that we’ll have a 200 mile range car by 2020 that will cost £20,000 and I think we’re very much on a trajectory that will get us there,’ he says. ‘That’s where mass market appeal of the electric vehicle really happens.’ POD Point's turnover last year was £6.5m and Fairbairn says the aim is to reach £50m by 2020. He thinks that’s ‘very achievable’ when considering the growth rate of electric vehicles.

‘There was practically 0% of the market a few years ago, heading towards 2% of all new cars being electric,’ he says. ‘So although the total [number] of electric vehicles is relatively small, the growth rate is pretty impressive – around the region of 300% at the moment.’

As with any new technology, there have been teething problems. Volkswagen recently recalled thousand of its e-Golf cars in the US due to a problem which could switch off the motors while in use (as if it wasn’t having enough problems at the moment…). That follows unrelated recalls by Nissan and Renault in recent weeks. But Fairbain thinks the more obstructive troubles impeding mainstream take-up are price and access to charging points - the roll out of which has been hindered at some points by planning permission. 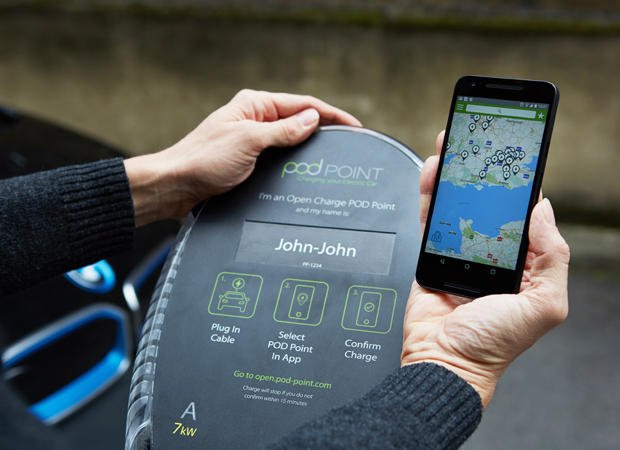 ‘There’s no technological restriction – you can buy a Tesla today and it will do 250 miles on a charge and can go faster than anything you point at,’ he says. ‘The negatives of a Tesla are that it’s quite expensive – you can’t get anywhere near one unless you’re at £50,000 to £70,000,’ Fairbairn explains. Elon Musk has though, just unveiled his lowest-cost car to date. The most basic version of a Tesla Model 3 will set you back $35,000 (£24,423) and has racked up a hefty waiting list, even though no one’s going to be able to buy it until the end of 2017.

Fairbairn says the price of batteries is also coming down ‘about 15% in terms of cost year-on-year’, while POD Point is ‘working as fast as we can to roll out points across the UK’ to address the infrastructure issue.

‘There isn’t a single silver bullet which immediately solves all environmental woes, so I think we have to look at these things over time,’ Fairbairn says. ‘Electric cars are about 70% more efficient, based on a well-to-wheel analysis, looking at the whole supply chain.’

He thinks the combination of firms like POD Point building charging infrastructure, energy firm Ecotricity working to decarbonise the electrical grid and Nissan, Tesla and co. creating the electric vehicles has meant that ‘together we’re moving towards zero emission status’.