Information overload can be a massive drag, and as a society we're only getting more and more swamped by Tweets, Facebook messages, emails, phonecalls and LinkedIn updates. Sherry Turkle, a psychology professor at MIT, has recently warned that spending too much time communicating digitally is destroying our ability to empathise.

Kate Unsworth, a tech entrepreneur based in London, wants to free people from being so reliant on their phones. The idea behind her business, Kovert Designs, came from an 'epiphany' she had in her past job as a technology management consultant.

'I was working completely flat out, I was completely dialled in all the time, responding to emails at dinner, in the middle of the night, always digitally connected,' she says. 'What I realised was that I had completely lost touch with my own core. I had forgotten how to connect with myself even though I was connecting to so many hundreds of people with my phone.

'I had this realisation that I needed to find a balance. I went offline for two weeks and I just wanted a full reset basically. At the end of that two week period I realised that I couldn’t live a life where I was so connected to my email and my phone all the time because I was unable to be present with my friends and family.'

After she came 'back online', she set about finding ways to keep phone time to a minimum. Despite banning phones in the bedroom and at the dining table, and cutting out emails after dinner, she found it was easy to slip back into old habits. 'The options that I had were either completely connected, or completely disconnected, there was no in between,' she says.

So in 2013 she launched her own company, Kovert Designs, in a bid to come up with a solution. Its first product, Altruis, is a range of vibrating jewellery that alerts its wearer when they have received smartphone notifications that simply can't wait. 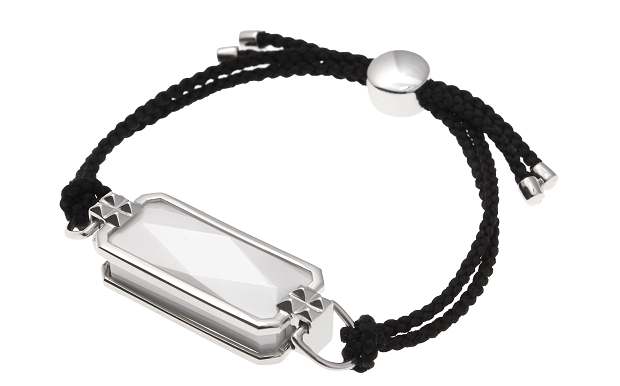 Using an app, the stones can be set to vibrate when you receive a call or message from a particularly important contact (like your nanny, partner or boss), or containing certain key words ('baby', 'fire', 'profit warning').

'It means that when you’re in a social setting, when you’re in a meeting or at dinner, you don’t have to repeatedly check your phone through fear of missing that important notification,' says Unsworth. 'You don’t have to be rude and leave it out on the table. You can really leave your phone out of sight, out of mind, and have the confidence that anything important you'll still be alerted for through your jewellery.'

The stones are interchangeable so they can be slipped into a necklace, bracelet or ring, depending on what you feel like wearing. The jewellery will be priced at £195-275. Altruis hasn't started shipping yet, but Unsworth says she has raised a 'tonne of cash' from investors (though she can't elaborate any further just yet), assembled a team of 30 people and generated a waiting list of 5,000 interested customers.

As for her own email use, Unsworth has taken extreme measures. 'I have an out-of-office on 24/7,' she says. 'It just says, "I don’t really check emails frequently, last month I reduced my email traffic by 70%, and now I’m taking it one step further."' So if you are interested in buying some vibrating jewellery for the special recovering workaholic in your life, then it's probably best not to drop her an email.

39 hours ago
Women in Business