Not many entrepreneurs have the audacity to value their business at more than £30m when it has only been trading for six months, but then not many new businesses have the kind of backers that London Union does.

The company, which converts derelict spaces into bustling street food markets, has captured the imagination of some of the biggest names in food. Its star-studded advisory board includes famous faces like Jamie Oliver, Nigella Lawson, Yotam Ottolenghi and Thomasina Miers. It's the work of the well-renowned bar entrepreneur Jonathan Downey (who goes by JD) and Henry Dimbleby, co-founder of the healthy fast food chain Leon.

In its first five months of trading over the summer, its three markets in trendy east London were visited by more than 300,000 people, generating revenues of £3.5m and EBITDA of £1.5m in just five months. Pretty impressive for such a young company, but then its origins do stretch back beyond this year. 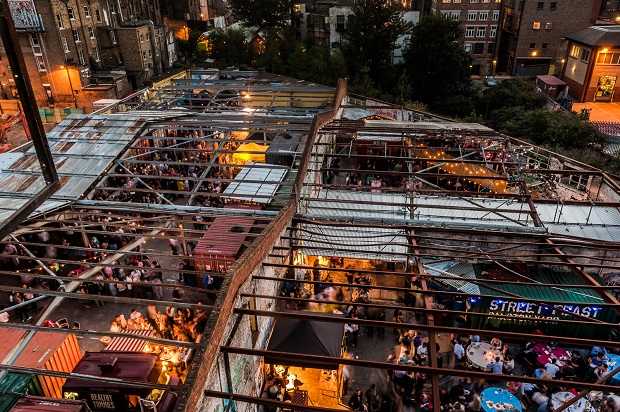 ‘He had all this incredible food, these bars and hidden spaces.’

The markets began life in 2012 as Street Feast, a company that Downey had a hand in building. ‘I used to go to Dalston Yard (one of the markets) with my kids after school on Friday, because you walked in and it was thrilling the way he designed them like a little town,’ says Dimbleby when MT meets him at the firm’s Dinerama market in Shoreditch. ‘He had all this incredible food, these bars and hidden spaces.’

After he was struck by an epiphany while on a hiking trip up on a Norwegian plateau (as you do), Dimbleby had an idea to take things up a notch. ‘I suddenly thought, oh my god, Dalston Yard is so amazing, it’s so incredible what he’s doing, but there needs to be some big, permanent version of this, it would be the most incredible food market in the world.’

So when he got back he approached Downey who, as it happened, had been thinking along the same lines. Earlier this year they formed London Union and acquired Street Feast with a plan to take the brand to the next level.

While they’ve been on the hunt for a permanent location to call home, they’ve also been focusing on improving their existing locations. Dinerama has a new roof to keep the food traders dry over the winter (MT recommends the ludiscrously tasty brisket at Smokestak) and they've opened a new local market in Canada Water called Hawker House.

Dimbleby compares London Union’s business model to Apple's app store. ‘We’re very reliant on our traders – we create the vibe for them to come to, but they are the magic dust,’ he says. ‘What JD does, his genius, is two things. First of all he has picked all the best street food traders - we work with 60 of them. And then he creates these incredible spaces, which are just thrilling.’

Downey and Dimbleby are a classic business pairing of creativity and execution. ‘He has the vision for this business, and I do everything else,’ Dimbleby jokes. ‘I am responsible for finding the sites, doing the licensing, doing the planning, building the team, creating the culture. All of that stuff to take it from something that was just wild, crazy and in Temporary Events Notices and make it into a thrilling business.’

There’s no desire to get rid of that sense of volatiility altogether though. In a bid to raise money without kowtowing to institutional investors, London Union is looking to sell a 10% equity stake through crowdfunding. ‘We’re a very very entrepreneurial, slightly anarchistic business – it’s all about breaking down traditional models,’ Dimbleby says. ‘If we had venture capital in, I’m not sure that would work.'

The company is looking to raise £3.5m, which would put it among the biggest crowdfunding rounds ever, but with a £5,000 minimum investment it might be tricky to part enough people with their cash. London Union is trying to sweeten the deal by offering all investors a seat at its 'Annual General Eating', and all those investing £10,000 or more will be eligible for a 10% annual bar tab dividend. 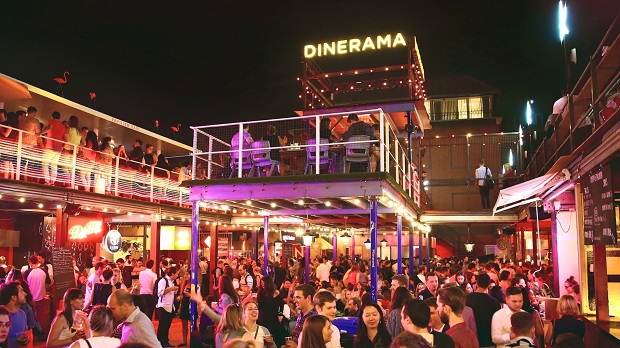 The big-name advisory board should help open some wallets too. Just how involved are London Union's celebrity backers going to be? 'I think they will be involved in different ways,' says Dimbleby. 'If you look at someone like Tom Parker-Bowles, he’s really good on British food suppliers and so he’ll help us with that. Giles [Coren] is wonderful at putting stuff into words and he’s helping with that. Jamie [Oliver] is just the most amazing enthusiasm bomb I’ve ever met.'

A £31m valuation might seem a bit steep but there's no doubt London Union is thinking big. As well as the plans to open a permanent location and 12 smaller markets in the capital by 2020, it also has its eye on foreign climes.

'We would love to go to [the US] and turn around an area of Detroit,' says Dimbleby. 'We’d love to go to Austin, to Berlin, and to become a business that not only transforms derelict spaces and brings communities together in the UK, but around the world and in a way that means the brand will become something very valuable in its own right.'

'Learn from my mistake - don’t be reliant on one supplier'

23 hours ago
Down to business