‘I don’t like shopping at all.’ Not exactly what you’d expect to hear from an entrepreneur looking to shake up the fashion industry, but then Tom Adeyoola doesn't come from the rag trade.

Adeyoola’s start-up Metail uses clever computer vision technology out of Cambridge University to create 3D virtual models of both shoppers and garments. You’re then able to ‘try on’ any number of clothes in a virtual changing room, to see what it would look like in 360 degrees, and find out whether it would fit.

He’s not coy about the potential impact this could have on global clothing retail. ‘We’re digitising garments, which is like creating the MP3. The new model then becomes the iPod.’ 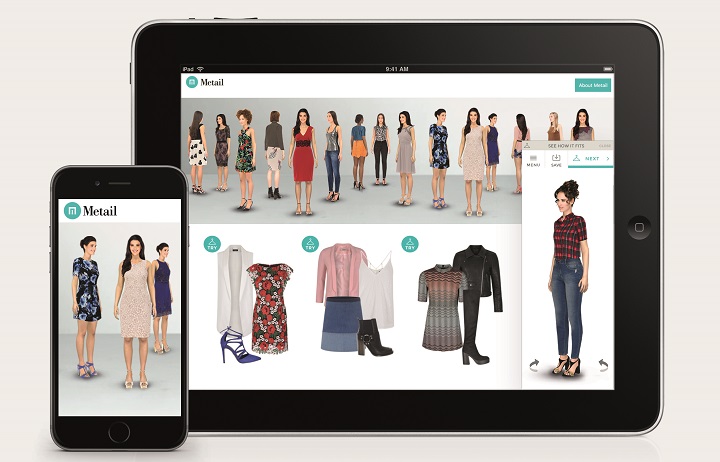 Retailers pay a licence fee and then a commission to use the tech, not only to improve the shopping experience of the eight million people who’ve created already virtual ‘MeModels’, but also to get access to body shape data so they can start designing clothes that fit better in the first place.

‘Taking that to its logical extension, we will be able to make made-to-measure clothing at ready-to-wear prices,’ says Cambridge economics graduate Adeyoola, who started the business in 2007.

Before then, he’d worked in start-ups during the dot.com boom, before managing his friend’s band (Bussetti), working for Warner Brothers (‘very boring’) and then Inspired Gaming Group, where he was tasked with creating a casino division from scratch. After 18 months, he says, it had achieved 70% market share.

The experience of building a corporate venture clearly gave Adeyoola the start-up bug. He spent a year trying to come up with an idea worth committing to. Then, his girlfriend’s (now wife’s) troubles with online clothes shopping led him to think of Roberto Cipolla, a Cambridge professor he’d met while researching an online gambling project, who was at the cutting edge of computer vision research creating accurate 3D models from photographs.

Seeing both a consumer problem and a technological solution, Adeyoola turned his attention to funding. The omens initially looked good. Inspired Gaming was due to be sold, which would have not only have made Adeyoola ‘comfortable’ from stock options, but also provided ready-made first investors in the form of his then bosses.

The only problem was that the buyer was an Icelandic bank. And this was late 2007...

Progress was understandably slower than expected, with everything ‘taking three times longer than expected’, but Adeyoola now sees the lost funding as a blessing in disguise. ‘It meant I had the time to network through the industry, grasp the issues facing them, think about the business model and focus IP efforts. Being naive, I’d probably otherwise have spent all that money quickly and flamed out within a year.’

Careful what you wish for

London and Cambridge-based Metail filed its first IP patents in 2009, and received angel investment in 2010. But still there were no big clients, as an early arrangement with ASOS fell through. Then, in September 2011, Adeyoola got a cold call from Tesco, which had heard about him from a best friend’s partner.

‘We launched with Tesco in February 2012, while I was on honeymoon in Nicuragua, at 4am, on the side of volcano, standing outside an office, using their wifi, in the darkness.’

The Tesco deal unsurprisingly raised Metail’s profile, and Adeyoola launched with five other retailers off the back of it. But, he says, the star client soon started to become extraordinarily high maintenance, constantly calling him in for meetings. ‘I remember a meeting where I demonstrated real business value to them, and they said "well, we’re not only about the numbers". I said, erm, so what are you about?’

It also took Tesco a year to pay. ‘They even had the gall to ask me whether I could pay another supplier that I’d introduced them to, on their behalf,’ says Adeyoola. ‘We terminated our agreement with them.’

Is Tesco finally back on its feet?

It was the beginning of several issues with retailers, which Adeyoola puts down to UK plc being stuck in cost-cutting mode since the financial crisis. Metail began looking east instead, to the innovative Asian market. ‘They’re focused on growth, they’re targeting a fast-growing middle class and they have no legacy issues,’ Adeyoola says.

Metail took £12.5m in funding in 2014 and a further £10m this year, with both rounds being led by Hong-Kong-based clothing manufacturer TAL.

Amazon on the horizon

The company, which employs 59 people but won't disclose revenues, signed a deal earlier this year with Korea’s third largest fashion business, the conglomerate Kolon. Adeyoola believes it will be first of many. ‘We’re going to be launching with four of the 20 largest clothing retailers in the world over the next three or four months. If we fully established with two of them it would be transformational for our business. I want six to eight by the end of next year.’

The reason for the optimism is that Adeyoola believes the fashion retail industry is on the cusp of a revolution, as consumers abandon traditional retailers for consumer-focused tech firms. He points to the example of Amazon, which very recently became one of his competitors after buying start-up Body Labs.

By utilising its superior data and logistics technology, Amazon is able to slash the exorbitant inventory costs that plague most retailers, in some cases selling items at half the price. As a result, it’s become a major force in US clothes retail in no time at all, and it’s still growing rapidly. Throw in a demand slump and retailers that have both over-leveraged and over-expanded, and you’ve got a perfect storm.

‘Everyone’s woken up to the need to invest, so there’s an arms race starting among the big guys,’ says Adeyoola, who clearly plans to benefit from this. ‘We’ve now shifted from a product development mindset to delivery and commercial scaling.’

Read next: Meet the entrepreneur selling postcards to the selfie generation

Businesses may need to cut costs as the economic situation worsens. But they should resist...