Many contestants on The Apprentice claim to have done their research before applying for the programme, but few would have the confidence to claim they know Alan (that's 'Lord' to you) Sugar’s autobiography ‘from cover to cover’.

So the producers were probably rubbing their hands together with glee when Joseph Valente strutted into auditions, dubbed himself ‘the definition of success’ and proclaimed, ‘If Richard Branson can do it, if Donald Trump can do it, if that guy from Facebook can do it, then I can do it.’ And yet despite what seemed the obvious potential for comedy gold, Valente not only proved himself to be a credible candidate, he won the whole shebang.

‘I think I was at an advantage when I applied for the show,’ he says. ‘I portrayed myself to be a businessman who probably wouldn’t be taken seriously and people thought I was a joker from the comments I’d made. But realistically, I knew I had what it takes and could back what I was going to do. I’m a very confident person, I believed the day I filled out that application form that I was going to win.’

Valente says he’s always gone after opportunities with this self-belief. He left school at 15 and found work with a local plumber to put him through his first year at college. He achieved his plumbing NVQ Level 2 qualification at 18, trained on a gas course in Sheffield and by 21 was earning around £25,000 a year as a qualified gas engineer. Around that time he received Sugar’s autobiography for Christmas and read it for three weeks relentlessly. ‘I decided I was going to quit my job based on how a man came from nothing and was able to achieve something great.’ He took out a £15,000 loan and in 2012 started the business he runs today – plumbing and heating company Impra Gas.

After coming home one night from a long day at work, Valente checked Facebook and Sugar’s page was at the top of his newsfeed. ‘It said do you want to apply for The Apprentice and I was like yeah alright, go on then, I’ll have a crack at it,’ he says. A week later he got a response and wound up getting on last year’s programme. It’s easy to laugh at how the contestants seem to cock up what appear to be the simplest of tasks and Valente says it was surprising just how difficult everything was.

‘On TV it looks easy and you think I can do that, what are they doing?’ he says. ‘Judging it as a viewer is nowhere near as hard as when you’re there, being filmed and working with people you don’t like. It is competition from day one, you’re locked away from the outside world for two and a half months – it’s very stressful.’ The contestants were only allowed a five minute call a week to phone home, which was particularly difficult for those with families and children. 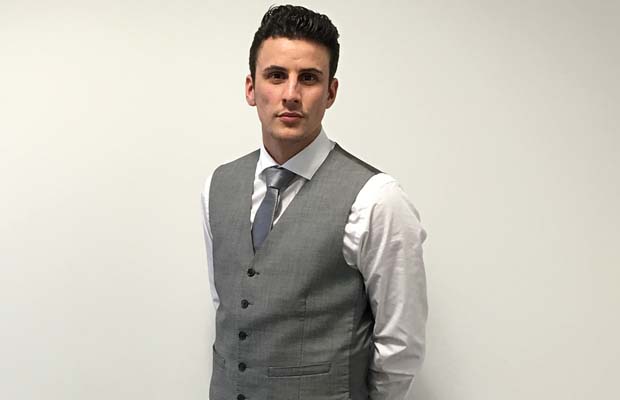 Since winning the programme and a £250,000 investment from Sugar, Valente says Impra Gas has been ‘doing a hell of a lot of work building our core foundation and management infrastructure’. He says the company’s investing heavily in people to build on the team of 14 and built new offices at the warehouse base in Peterborough. The firm provides services and maintenance of plumbing, heating and electrical products to property management firms, landlords and private homeowners. He won’t disclose turnover but says Impra Gas currently has around 2,500 individual properties on its books and 10 B2B relationships.

Valente’s particularly enthusiastic about encouraging prospects for young apprentices in his business. ‘We employ two apprentices at Impra Gas and I will be doing whatever I can as my company grows to bring as many apprentices as possible on board,’ he says. ‘You can develop them into the employee you want them to be and hopefully set them up for life with the right skills. I’m trying to push as much as possible that the national curriculum needs to be directed more to the practically minded individuals. I feel apprenticeships are seen as the dropout’s route for people who don’t want to go to university, which is completely untrue.’

Another focus for Impra Gas is the smart home market. It recently partnered with Nest to launch Impra Smart Home, an initiative to ‘offer the mass consumer a smart home upgrade that’s affordable’, covering heating, sound and security. Prices start at £480 (including VAT) and go up to £3,000. ‘I’ve been watching what big organisations are doing and now’s the right time for us to pioneer our own service, which is why we’ve packaged it for general consumers,’ Valente explains. ‘In the next 10 years we think the smart home market is going to be massive.’

And he hopes Impra Gas will continue to grow too – the aim is to become nationwide within five years and ‘get 10 counties under our belt, which will require a strict process of recruitment, sales and development’. Currently it’s in Cambridgeshire and Northamptonshire, with Bedfordshire and Hertfordshire soon to follow.

And what of his idol Sugar? The two catch up at monthly board meetings. Sugar advises as a mentor, which suits Valente just fine. ‘I know my industry, I know where I want to take the business and where I want to go, so I definitely don’t need my hand held that’s for sure.’

By Adam Gale
36 hours ago
Women in Business

By Adam Gale
46 hours ago
Food for thought