It's a rainy Wednesday afternoon in north London and MT is tucking into a velvety bowl of crab bisque. The soup's creator has just spent the last 30 minutes carefully cooking the dish with all the precision of a master chef and it shows - it tastes seriously delicious.

But the chef in question is not a human. The Robotic Kitchen is the invention of Moley Robotics founder Mark Oleynik, a Russian entrepreneur and computer scientist who wants to change the way we cook. 'It gives the customer an unlimited number of choices and options in the home, which is I think very helpful for the future,' he tells MT. 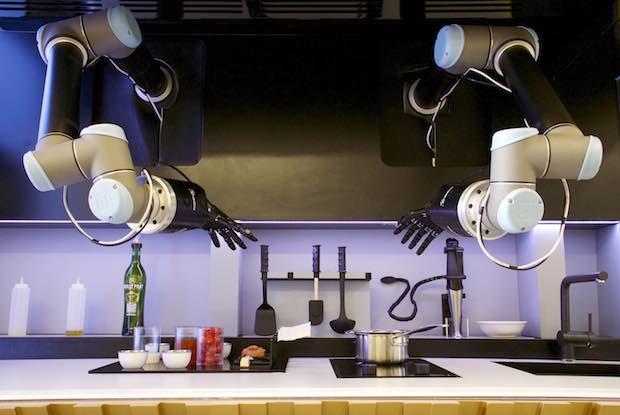 The device, an early prototype at the moment, consists of two robotic arms that hang from the ceiling of a standalone unit, which includes a hob and a sink. They can be programmed to accurately mimic the actions of a professional chef, which are recorded using motion sensor technology. The crab bisque recipe was recorded by former MasterChef champion Tim Anderson. (Fans will remember him as somebody that wasn't afraid to experiment, so this must be right up his street.) 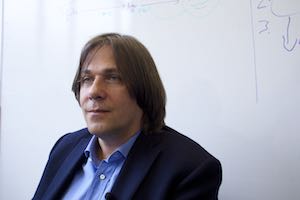 It’s not totally without its faults though. At one point in the demonstration the robot chucks a precious nugget of white crab meat into the sink, and the final sprinkling of tarragon it throws on is less than delicate. At the moment it’s also only able to make the one dish – and not in its entirety. You won’t find it cracking open a crab shell to extract the meat or chopping its own onions.

But give it time. So far Oleynik has bankrolled Moley (which has five employees) himself, but he is in the process of raising $5.5m of investment. That will be used to develop a more adept industrial prototype ahead of a planned consumer launch in 2017. The final model should be able to do a lot more – including prep and washing up.

‘Robots can already do surgery, to cut carrots is not a big problem,’ says Oleynik, who hails from St. Petersburg but has lived in London for five years. The idea is that one day, chefs will be able to record their own recipes and upload them to a marketplace like iTunes.

When the robot does come to market, it won't be cheap. The initial retail price is expected to be $75,000 (£50,000) but Oleynik says that will come down over time. 'Unfortunately when you create the first version of a product it cannot be sold cheap,' he says. 'But the question is, if you can bring the product to market. It's going to be cheaper and cheaper if you have a positive response.'

Having your dinner made by a robot may be anathema to traditionalists like the 'Slow Food' movement but it's not hard to see how it could catch on. The initial price tag will be prohibitively high for most home cooks, but could definitely make economic sense for restaurant chains keen to slash their wage bills. 'We have a number of requests from different business sectors like restaurants, we have demands from catering companies, we have some interest from real estate companies that build houses,' says Oleynik. 'Everybody is looking at what is the next stage of technology, everybody is thinking about robotics.'

As with most big leaps in technology, the onward march of the robots has got plenty of people nervously wondering about their future career. Oleynik says cooks shouldn’t be worried. ‘I think chefs will like this concept because they can sell their IP product – a recipe – to a lot of potential customers through our network.’ That might work for Gordon Ramsay and Heston Blumenthal (robotic curry ice cream, anyone?). But it’s hard to imagine the legions of High Street chefs that could be laid off everywhere from Pizza Express to Wetherspoons would be able to make a living from it. 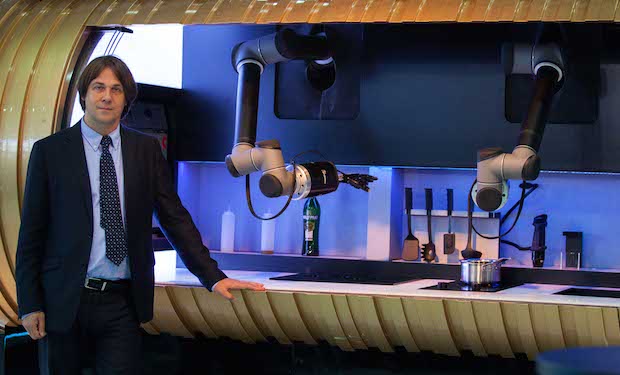 That doesn’t mean it wouldn’t benefit society as a whole though. The horse-drawn plough meant there was less demand for agricultural workers, but where would we be without it? As well as making restaurant food cheaper and tastier, the robotic kitchen could free up a lot of spare time.

‘In the future I don't see any problem with robotics for humans because what robotics can do is give you more flexibility,’ says Oleynik. ‘You can spend this time when the robot is cooking on something else.’ That could be time with the family or doing work – either way, it’s pretty helpful.

‘I hope one day, it could be our regular, just normal life, and nobody will say, "this looks very strange",’ says Oleynik.

It’s probably safe to say that’s a long way off.

'I became governor of Iceland's central bank in 2009. Here's what I learned about crisis management'