There are plenty of examples of businesses launched by couples that blossomed into big names – from the established likes of Cisco to the more recent success of Eventbrite. Husband and wife team Dilshad and Barinder Hothi haven’t yet guided their business providing professional training to such great heights, but the early signs are good. The Knowledge Academy’s turnover for 2014 was £22m and it’s on track to record £35m for 2015.

The Knowledge Academy offers a mixture of classroom-based teaching and digital learning, mostly in IT and business, with clients including the self-employed, small businesses and bigger blue-chip firms like British Airways, PwC, Disney and Rolls-Royce. Barinder feels the way to distinguish the firm from other professional training companies is by making sure it doesn’t become too narrow.

‘The training world is quite fragmented – you have a lot of specialists and there really isn’t a global holistic structure – a real generalist out there operating globally and I think that’s our real key,’ she explains. So far, the approach to doing so has involved offering programmes worldwide, with a focus on broadening the portfolio further, while the Hothis also offer a 'best price guarantee'. Currently, the training is available in 196 countries, covering 3,000 subjects and The Knowledge Academy now has 250 employees on its books.

Even so, their aim to become ‘the Amazon of the professional training world’ is an ambitious one – Jeff Bezos’s ecommerce company has been nothing short of revolutionary in entertainment and publishing, as well as retail, even if it has struggled to make a profit. Achieving that in the already  crowded market of professional training will be easier said than done – especially if the focus is on expanding the portfolio without compromising on quality.

In terms of their respective roles, Barinder is MD and Dilshad CEO – she is focused on ‘the execution’ while he is concerned with ‘the vision and the strategy’. There are obvious pros to working with a partner – finding someone you trust implicitly is often easier said than done in business. ‘You can share your thoughts, conflicts and you have a sounding board,’ Barinder says. ‘Often in business when you set up, you don’t have a lot of that and it’s difficult finding someone with the same mindset as you and a common objective.’

The Hothis have been married for 16 years and both have backgrounds in IT  – Barinder worked in sales while Dilshad’s previous roles were on the training side of things. ‘We worked hard at other businesses and had been successful, so we were very stable financially and had reached the pinnacles of our careers,’ Barinder explains. ‘So, we wanted to see if we could start a small venture of our own. Training was the obvious choice because of Dilshad’s background and my understanding of professional services and the IT sector as a whole.’ 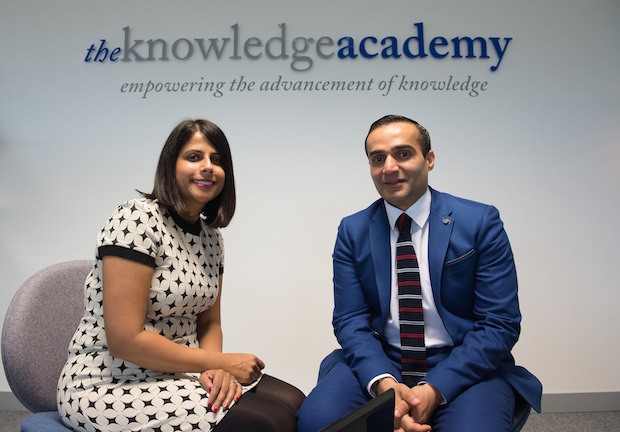 They launched the business in April 2009 when the world was reeling from the financial crisis. ‘We entered the marketplace at quite a difficult time. I think there were over two million people unemployed in the UK and there were a lot of people out of work trying to get back into it and having to re-skill to do that,’ she said.

The couple made the conscious decision to arm themselves with an aggressive pricing strategy to better navigate a crowded market – up against the likes of Firebrand and QA for IT training. ‘We made an effort to make our programmes more affordable, because we have been out of work and know that a lot of people don’t have £800-£1,000 to afford their own training,’ she says. ‘I think it has allowed us to grow our footprint in terms of a lot of these professional certifications that people wouldn’t ordinarily be able to afford to do.’

Future plans include new languages, as all the training is currently done is currently in English. Building up the customer base and brand recognition is also on the agenda. ‘Our aspiration is that when people think about training, whether an individual or a large corporation, The Knowledge Academy is the brand that comes to mind,’ Barinder says. ‘We’ve got a lot of work to do certainly, but we’re making inroads.’ Acquisitions will also be afoot – ‘we’ve done a couple to date and I’m sure we’ll be doing more in the New Year’.

Barinder thinks there’s ongoing demand for training courses as the current business environment has ‘a real requirement for individuals to learn both in and outside of the classroom’. So, The Knowledge Academy offers instructor-led programmes, completely online courses which individuals work their way through and virtual training programmes, with other people from other remote locations in the same time zone.

‘It’s almost as close as you can get to being in a classroom and getting that human interaction without having to travel,’ she explains. This has the obvious asset of being accessible to more people and reaching remote areas, restricted in opportunity simply by location. You do of course still need an internet connection, but it can offer up access to learning that may have seemed out of reach previously.

With the business growing apace, has it become difficult to set aside any downtime, particularly having a dual business partner and spouse? ‘To be honest, we don’t switch off a lot. We get asked if there’s a no phone or iPad rule at home and if we did I don’t think it would work,’ Barinder admits. ‘Clearly we have to get a work-life balance, but the work is such a big part of our lives that I think it’d almost be like a punishment if we were told we had to literally switch off – it just wouldn’t work.’